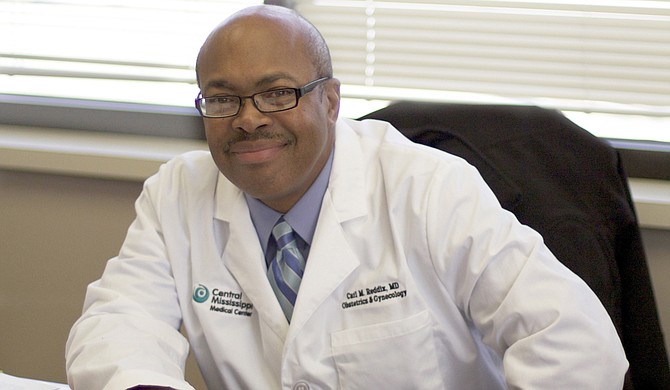 JACKSON — Dr. Carl Reddix, flanked by his attorney Lisa Ross, slowly limped his way down the ramp yesterday in the U.S. Southern District Federal Courthouse, leaning on an umbrella for support.

On July 19, Reddix pleaded not guilty to seven counts of bribery, appearing in front of U.S. Magistrate Judge Keith Ball for the first time in the latest chapter of the bribery scandal that continues to unfold around former Mississippi Department of Corrections Commissioner Christopher Epps.

Reddix kept his head down as he walked outside the courthouse, and when they reached the crowd of television cameras, Ross took point for her client, dismissing all questions with terse replies of "no comment."

By the time Reddix slid into the passenger seat of a white sedan at the curb, the flock of press surrounded Ross, and she addressed them directly.

"It was a shakedown," Ross said. "Chris Epps shook him down for the money."

One of the reporters asked, "Were the charges unfounded?"

"I'm saying it was a shakedown," she repeated, raising her voice. Reddix watched from the car, the passenger-side window rolled up against the heat and the press.

The "shakedown" circumstances to which Ross referred are the seven counts of bribery that a federal grand jury brought against Reddix in his July 13 indictment, which was only recently unsealed. The indictment alleges that Reddix provided cash installments to Epps from 2011 to 2013 for continued contracts for Health Assurance, LLC, at several Mississippi correctional facilities. 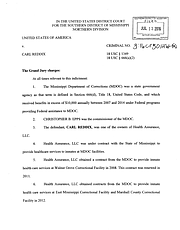 Reddix's brother, Dr. Michael Reddix, is listed as the manager of the company on the secretary of state's website. Dr. Carl Reddix is not listed on the official paperwork for the company.

A representative of Dr. Michael Reddix's office said July 21 that they did not wish to comment on the proceedings.

The indictment does not correlate the bribes to certain contracts but instead sketches out a pattern of regular delivery over a period of time.

The first count, for conspiracy, alleges that beginning in 2012 Reddix delivered to Epps monthly cash payments of $6,000 in exchange for contracts until 2013 when the monthly allotment increased to $8,000 a month. Then, in August and September 2014, the bribe allegedly increased to $9,000 a month. Finally, in October 2014, the indictment alleges that Reddix paid Epps $9,500.

So, for the first count of seven in the indictment, the bribes Reddix allegedly gave to Epps total $195,500. The rest of the counts detail consecutive months in 2014, from May to October, with alleged bribes beginning at $8,000 and gradually reaching the plateau of $9,500. The first count is for conspiracy, and the other counts are for specific instances of bribery.

Judge Ball advised Reddix July 20 that he faces up to 20 years for the conspiracy count including a fine up to $250,000, and that he could serve an additional 10 years for each of the other counts, if convicted. Ball explained to Reddix that these could terms run consecutively, meaning that the time could add up to 80 years if he is convicted of the charges.

During the judge's questioning, Reddix admitted that he had been under treatment for substance issues, in his case alcohol, and that he had a drink the day before.

The secretary of state's office lists Charlene Priester, mother of Jackson Ward 2 Councilman Melvin Priester Jr. and wife of Hinds County Court Judge Melvin Priester Sr., as the registered agent of Health Assurance, LLC. She is an attorney, listed with the Priester Law Firm in Jackson.

"Priester Law Firm has represented the company as its agent for service of process, and we have done some legal work for the company," Charlene Priester said during a phone interview on July 21. "We are not an owner. We are not a principal. And I don't have any comments regarding the indictment. "

When asked about the participation of other agents of the company, Deputy Criminal Chief Darren LaMarca, who is representing the state, only replied, "A company can only act through individuals," LaMarca said.

The trial for Reddix is scheduled for Oct. 3.