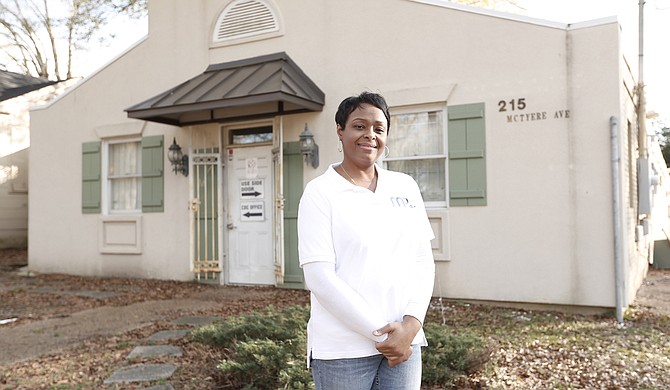 Ellen Collins is the director of Midtown Partner’s Prosperity Center, which offers services like GED training and life-skills courses to local residents. Photo by Imani Khayyam.

Travis is the eldest of five children and still lives at home with his family. He didn't graduate from high school, but he's trying to turn that around now. He is in a GED program run through the Prosperity Center in midtown Jackson. Born and raised in the area, Travis didn't know he could qualify for the supplemental nutrition assistance program, called SNAP, when he dropped out of school and started working off and on at a screen-printing store.

SNAP has helped Travis, whose name has been changed, over the last six months save some money, as well as provide for his parents and siblings. As the oldest at 21, Travis feels obligated to help at home, offering some of his meager income from his fast-food job to help his family pay for bills as well as sharing groceries he buys with his SNAP money.

SNAP benefits are for people living at the poverty line or with very low incomes, and any income a person does earn cuts into the amount of money they receive. SNAP recipients go to designated centers to receive food and vouchers. The federal government pays for the benefits, but the state must administer them; in Mississippi those benefits are administered through the Department of Human Services. Each county has its own DHS SNAP office; Travis can walk to the local SNAP office in his neighborhood.

When the recession hit in 2008, the federal government extended SNAP time limits, which are typically three months over a three-year period, for several states where the need was high. Mississippi was one of those states. The time-limit waiver expired at the end of December 2015, however, and now it's up to the governor to apply for the same time-limit waiver that would enable what the country calls "ABAWDs"—"Able Bodied Adults without Dependents"—to continue to receive food vouchers for at least another year without a three-month limit.

If the governor doesn't move on the state's application to extend the SNAP time-limit waiver, many single adults will lose their SNAP benefits in the next 10 months. The governor's office did not respond to emails or calls requesting comment for this story.

While unemployment is down nationally and in Mississippi, the state's economic indicators show slow growth, especially in the job sector. The January Mississippi's Business report showed a .5 percent growth in unemployment claims from October to November 2015. Current SNAP beneficiaries could qualify for personal exemptions, but in order to learn if they qualify, they should head to their SNAP office soon, Warren Yoder, executive director of the Public Policy Center of Mississippi said.

The most recent MDHS report shows that the average benefit value for a person on SNAP benefits is $119. Unemployed, single adults will be most affected by the expiration of no time-limits on SNAP benefits, Yoder said, because unless they qualify for a personal exemption, their benefits will be limited to a three-month time limit every three years.

Travis and another man named A.J., whose name has also been changed, both challenge the stereotype that SNAP benefits are no more than "free handouts" for people too lazy to find a job. Both men should finish their GED program by summertime, and for A.J. that time can't come quick enough. A.J. cannot find work without a high-school diploma, and he said a GED should help him get out of the unemployment rut.

A.J., 35, lives in Jackson with his sister and the rest of his family. While A.J.'s family is not legally dependent on him, he still shares his SNAP food with them.

Travis and A.J. agreed that the SNAP program is critical not just for their own lives but for those they know in their GED program and in their neighborhoods. When they heard the time-limit waiver is available for Mississippi, they asked why our state would not apply for that.

"If it's benefitting our country, and if it helps the people, why would you not keep it (the program) going?" Travis said. "For the children, families and poor people."

Yoder guesses that about half the unemployed adults who receive SNAP in Mississippi will meet the exemption standards to continue to qualify for food benefits without a time limit. He fears that the other half, however, will have to turn to local food shelters and nonprofit organizations for food once their benefits run out. \

The DHS report shows that 628,406 Mississippians received SNAP benefits in October 2015. The number of able-bodied adults who receive SNAP benefits is not distinguished from that number.

Yoder said Mississippi's SNAP program has one of the lowest fraud rates in the country—meaning recipients don't sell their benefits and truthfully record their income to qualify. He worries what the consequences of not applying for the time-limit waiver will do for the state as a whole.

"Without SNAP, this state would collapse," Yoder said. "It props up our grocery stores, our food distributors and the whole food sector."

For single adults, Yoder said under-employment translates to "slap shifts" when a person might have a part-time job but never works for eight hours a day or 40 hours per week. He said the myth that these adults are "lazy people that won't get jobs" is not true because these adults cannot find jobs that sustain them with a livable income, and they barely have enough income (if any at all) to make ends meet in the first place.

"Most people are getting modest amounts of assistance, but because they have such low incomes or are by definition very low-income, that's the difference between making it and not making it," Yoder said.

Without SNAP, Travis or A.J. will have to use what little disposable income they have to feed themselves (for A.J. this is none right now). Yoder anticipates several organizations and people across the state will work hard to combat the ill effects of those whose SNAP waivers expire soon.

"This is going to be a hurricane of need and hunger," Yoder said. "We're asking the government to consider (the waiver)."

As the director at the Prosperity Center, Ellen Collins sees people with SNAP benefits on a regular basis. The center has a partnership with the Department of Human Services, which distributes benefits on the government's behalf. As the time-limit waiver expires, Collins said the services that the center offers, like GED certification courses, job-skill training and financial counseling, could become more important.

Travis and A.J. both hope to qualify for this exemption because they are both enrolled in the GED program. They are both planning on taking their GED test in the summer, if not sooner. Collins said the Prosperity Center has services that can help those looking for work. "We can help you begin a job search and brush up on your employability skills," Collins said.