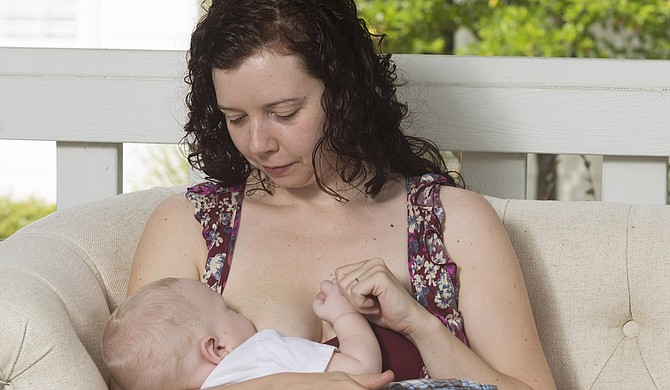 Jacqueline Hammack (pictured with her son Morris) said the breastfeeding bill will give women full access and time to breastfeed (or pump) in their workplace—something that many women currently do not have. Photo courtesy Sharon Coker

Her hands were already full with her four boys, and she forgot her sling that day for her youngest, whom she was still nursing. Jazzmine McKee had stopped at a major department store in August but then realized she needed to feed her son. When she asked a manager where she could breastfeed, she was told she could go to the bathroom—not exactly a hygienic, let alone convenient, place for a mother with four kids in tow.

Desta Reff, who moved to Mississippi from Boston, Mass., was breastfeeding her daughter at a restaurant with a scarf over her daughter, when a stranger came up to her and said: "What's the baby doing? Is that baby sleeping?" Reff was surprised. She finally told the person, "The baby is nursing—she's eating." The stranger looked confused, and Reff realized that the stigma around breastfeeding in Mississippi is much different than in Boston. McKee and Reff's stories are examples of a statewide problem: The stigma around breastfeeding should not exist.

The Centers for Disease and Control, the U.S. Surgeon General and the majority of research on the topic indicate that breastfeeding is better than using formula when a baby is born. In 2011, the U.S. Surgeon General prepared a call-to-action report that laid out the benefits of breastfeeding. Babies who are breastfed are less likely to develop asthma, become obese or be at risk for sudden infant-death syndrome.

Despite its numerous positive health outcomes for babies, breastfeeding is not popular in Mississippi. In fact, the state ranks 50th in the CDC's state maternity practices in infant nutrition rankings and care and 47th in its state ratings for breastfeeding.

Who joins the conversation in the state is important, and lawmakers are usually not at the table, Reff said. "It needs to be re-framed," she said. "This is a state health issue."

The Mississippi Legislature passed a breastfeeding bill in 2006 that de-criminalized the practice. Sen. Hillman Frazier, D-Jackson, helped pass the 2006 bill that made the right to breastfeed in public the law.

Reff, who is working on getting legislation passed this session as an advocate and a member of the Mississippi Breastfeeding Coalition, wants to implement further changes to the 2006 bill that would protect women and educate the public about the benefits of breastfeeding.

Sen. Frazier has introduced another bill this session that would require employers to provide spaces for nursing employees to breastfeed. It also would require healthcare facilities to post breastfeeding guidelines and introduce a fine (of no more than $250) for any company or agency that asks a mother to stop breastfeeding, despite it being legal.

Jacqueline Hammack, a local reproductive-justice lawyer, said she has received calls from women who have had problems negotiating time to breastfeed with their employers. Hammack said that even if women have to be away from their babies during the work day, they still need to pump at work and express milk to keep potential risk for infection down and be able to nurse when they get home.

A new mother herself, Hammack nurses her son, Morris, in public regularly and says she has never had any problems with it. Since she had her son a year ago now, she has started working from home to be with him but recognizes that Frazier's bill will help women who don't have that luxury.

"I am white, educated, heterosexual and have been fortunate enough to work from home for his first year, but most of the mothers in Mississippi don't have those things working in their favor," Hammack said. "They need the kind of support that this legislation can provide."

Taboo is Costing the State

The public-health benefits of breastfeeding are important Frazier said but he also admits that the long-term savings for the state's budget are critical.

If children avoid health risks from infancy, they are less likely to miss out on school and cost the state money by incurring health costs down the road, he said.

The U.S. Surgeon General estimates that a family can save $1,200 to $1,500 on infant formula if the mother breastfeeds her child for the first year of its life. Frazier said that increased awareness, alongside a bill like the one he is introducing, will prevent employers (or stores or companies) from penalizing women for feeding their child in the healthiest and most cost-effective way possible. "This is a chance to make Mississippi healthier; women shouldn't be penalized for making that choice," Frazier said.

Similar bills to Frazier's have passed in 20 other states, including Tennessee and Arkansas, says Reff, who has done her research in helping to prepare the bill. Reff said educating a majority-male Legislature about the issue is going to be important for the bill to pass.

McKee agrees and said her husband is a big advocate for breastfeeding, and she's hoping legislators can see the need for a stronger law. McKee, who is originally from New Orleans, said she found a dramatically different culture in Mississippi.

"This is a problem with society," she said. "Society has sexualized breasts to the point where breastfeeding, which we're naturally intended for, is taboo."

"How can we turn our backs on the very lives that sustain creation?" McKee said. "It's very sad and scary that this is going on."