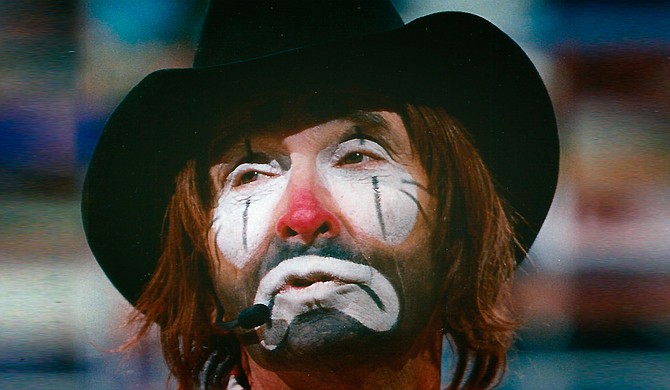 What inspires a young man to climb on the back of an ill-tempered, 1,500-pound Brahman bull? For veteran rodeo clown Lecile Harris, it was watching the bull riders at an Arlington, Tenn., rodeo in 1955. Thinking it was something he could do, Harris climbed on the back of a bull and was thrown before getting out of the bucking chute. The day ended with a torn shirt and a determination to try it again.

Harris, 79, was born in Lake Cormorant, Miss. He lived there until he was 5 years old, when his family relocated to Collierville, Tenn. A self-professed clown with a penchant for mischief, Harris was 18 and bound for college on a football scholarship when he tried to ride a bull at his proverbial first rodeo.

"You could do that at the little Sunday afternoon rodeos back then," Harris says. "You just paid your $5 entry fee, borrowed somebody's rope and spurs, and got on. Most people only get once. If they have as big a wreck as I did, they don't try it again, but it kind (of) made me mad."

Harris tried bull riding a few more times before he got in the arena to bullfight and distract the angry bull away from a fallen rider, the dangerous role of the rodeo clowns at that time. When the opportunity arose, Harris kicked off his rodeo career as a volunteer replacement for an injured clown.

"Well, about the fourth Sunday I went back to Arlington, the regular clown had broke his collar bone and couldn't make it," he says. "I'd been watching the bullfighter. I was a little bit more interested in bullfighting than riding. I was raised on a farm and knew cattle; I had what they call 'cow sense,' so I told the man running the rodeo (that) I thought I could do it."

For the next few years, Harris played football and studied animal husbandry at Northwest Mississippi Community College. He rodeo-ed in the summer, honing his bullfighting and clowning skills. That's when he discovered that he could dance with the bulls.

"The bull dancing came about accidentally," he says. "When I was young, around 1956, I would work the entire rodeo. The bull riding was usually the last event, so the announcer would play a rock 'n' roll song, and I would comedy dance for the crowd. At the end of each performance, they would turn out a fighting bull, and I would pair up and dance with it. Sometimes (the bulls) were hot enough that when I made my moves, they would do the same, and it looked like we were dancing. I danced with a bull at every rodeo until I retired from fighting."

Harris clowned, fought and danced with the bulls for 36 years, but his career continued. His comedic talent paved the way to work in film and television including roles in "Walking Tall, Final Chapter" and "The Last Days of Frank and Jesse James." He was a cast member on the musical comedy show, "Hee Haw," for five years. Professional Rodeo Cowboys Association named him Clown Of The Year in 1992, 1994, 1995 and 1996, and in 2007, he was inducted into the Rodeo Hall of Fame. Harris continues to perform and do comedy announcing at rodeos around the country, including at the annual Dixie National Rodeo, which is Feb.11-17 this year.

"I've been performing in Jackson for about 20 years, so the Dixie National is really special to me," he says. "It's the whole package—a really good rodeo, but small enough that I can walk around and see all the people I've been seeing in those boxes for years. I know them; I know their kids and grandkids; I've seen all of them grow up. It's like coming home."

This year, Harris has a special treat for his Jackson fans and family. After each performance, he'll be selling and signing copies of his book, "Lecile: This Ain't My First Rodeo" (Clowning Around Enterprises LLC, $20, 2015)

For tickets and information, visit mdac.ms.gov.