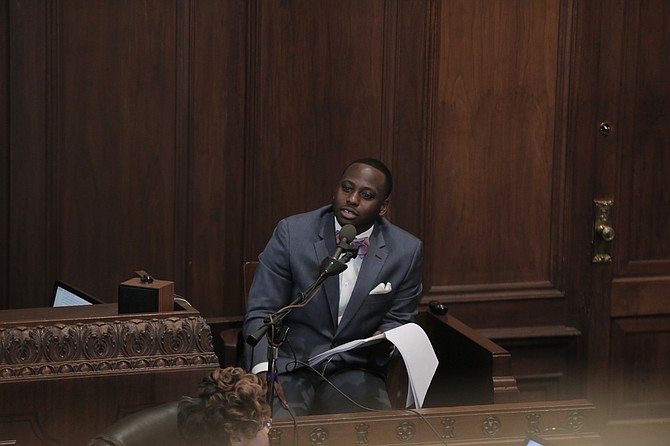 JACKSON — The jury in the trial of Hinds County District Attorney Robert Shuler Smith has a lot to untangle, as the prosecution continues to present pieces of its case that the district attorney conspired to hinder the prosecution of Christopher Butler in order to aid in efforts to free him. Butler is accused of drug trafficking and wire fraud in separate cases.

So far, Smith's defense seems to be that the State was wrongfully prosecuting Butler in the drug arrests based on video evidence the jury has yet to see. The emerging question is how far a district attorney can or should go inside, or outside, the law to free the accused he believes is not guilty.

The State proffered testimony from former Assistant District Attorney Ivon Johnson, who flipped on Smith after the FBI caught him accepting bribes to lower bonds. Johnson secretly recorded three conversations he had with Smith over the last year that were largely about combating the charges that the attorney general's office had leveled against Butler for wire fraud earlier in 2016.

Johnson repeatedly said that Smith formulated the plans himself, even going so far as to refuse Johnson's offers of assistance with drafting court documents.

"The (Butler) case became the big thing in the office," Johnson said on the stand on Dec. 20. "(Smith) and I spoke about it a great deal."

The attorney general's office, represented by a team of assistant attorneys general, including Robert Anderson, Larry Baker and Marvin Sanders, also called employees of the Hinds County Sheriff's department to confirm Smith's visits to Butler when he was in the Raymond jail in May.

Butler's attorney at the time, Sanford Knott, testified on Dec. 22 that while he gave Smith permission to visit Butler, even informing Butler that Smith would contact him, that it was "unusual" for a sitting district attorney to visit a defendant in the jail, especially outside the presence of a defense attorney.

The State appears to be pushing for these events, including Smith's comments on the secret tapes, to indicate a concerted effort by the district attorney to leverage his position and influence to push for Butler's release.

Lee McDivitt, the investigator who arrested Smith for the original affidavit of charges in June, said during testimony that texts from Assistant District Attorney Jamie McBride to Smith showed that the attorneys were acting outside their role of locking up criminals.

"All I know is that Mr. McBride was actively trying to come up with a defense for Christopher Butler," McDivitt said on the stand. "It also appears that he was trying to indict attorneys general."

McBride is expected to testify against Smith this week; the prosecution dropped his matching charges of conspiracy on the first day of trial, saying he was cooperating.

The role of the district attorney is not simply to be an aggressive prosecutor of suspected criminals, former Mississippi Supreme Court Justice Oliver Diaz explained during a Dec. 23 interview with the Jackson Free Press

"The prosecutor, in our form of government, the greatest tool that he has is discretion," Diaz said. "He is charged with enforcing the laws. He can bring criminal charges against anyone."

But Diaz says it is impossible to prosecute every crime, so this ability to pick and choose is essential to the role. "Therefore, the prosecutor has a great deal of discretion in who he chooses to prosecute, and the great power lies in his discretion in bringing the prosecution," Diaz said.

So, Diaz explained, Smith has the right to choose whether or not to pursue a case.

There are also no laws, to Diaz's knowledge, that compel a district attorney to prosecute cases. The question, then, is if Smith broke the law forbidding a district attorney from aiding or assisting a criminal defendant while exercising his interpretation of the role of the prosecutor.

Diaz said the jury would determine the definition of that law in this case. He said Smith's visits to Butler in jail are not an unusual happening.

"I think it's very common. I've had prosecutors that meet with criminal defendants all the time," Diaz said.

"As a matter of fact, I think that the majority of the time that people accused of crimes talk to police or prosecutors without an attorney present. That's how they get most of the confessions they get."

However, Diaz did say that most defense attorneys would not allow their clients to meet any prosecutor without their attorneys present, too.

The jury is hearing more testimony throughout the week after Christmas at least.