Jackson Asks State to Pitch In for Capital 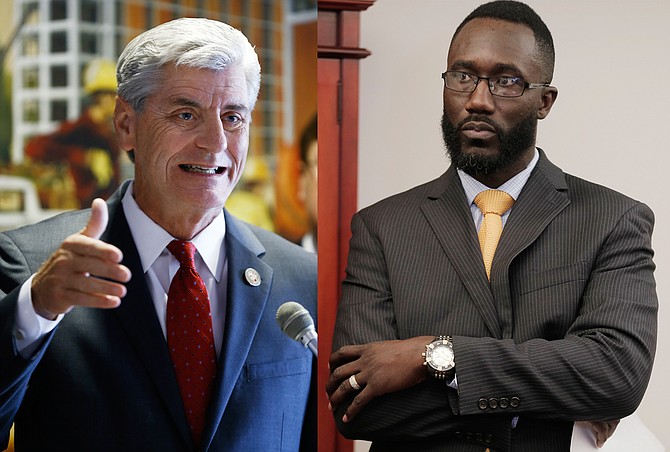 Gov. Phil Bryant (left) called Jackson’s difficulties a “concern for the entire Metro area” in his recent budget recommendation to the state legislature for next year. Mayor Tony Yarber (right) and the city council sent a list of requests to the same body during their last regular meeting on Nov. 29. Photo by Imani Khayyam.

JACKSON — The City of Jackson has dual identities: one as the capital city and one as the largest city in Mississippi.

When the City Council passed its legislative agenda at its last regular meeting on Nov. 29, the members sent a message to the state legislature that emphasized the need for the state's investment in its capital city.

Gov. Phil Bryant appeared to set the tone for increased state investment in Jackson in his executive budget proposal for the state, presented to the legislature in November. Jackson occupies one paragraph in the 25-page document.

"Jackson's struggles are not a competitive advantage for neighboring jurisdictions; they are a cause for concern for the entire Metro Area," Gov. Phil Bryant states. "But nor are Jackson's problems merely the byproduct of misperceptions. The challenges Jackson has with infrastructure and cost containment are real. Tax-exempt properties owned by state government, hospitals, colleges and churches keep increasing their footprint in Jackson. Even a well-managed city would struggle under infrastructure and service demands. City leaders and state leaders must work on a nonpartisan solution."

Council members applauded the sentiment they interpreted from the governor's budget proposal as they discussed the requests they'll make in 2017. Here's a look at some of the key items.

Jackson Wants State to Pitch in for Infrastructure Improvements

The council passed an initiative requesting an annual contribution from the State to fund improvements to the crumbling infrastructure that supports state-owned buildings. In essence, the City wants the State to pay some form of compensation for the property that will forever be off of the tax rolls due to the exemption of state property from taxes.

The request comes a year after the legislature let a bill die in conference set to create a special "capitol complex district," allotting a portion of the City's tax revenue to a special board who would oversee the funds. (Last-minute additions to the bill included a special judicial district, necessitating an appointed judge for downtown Jackson.) The proposed commission would have operated in a very similar way to the One Percent Sales Tax Commission that currently administers certain infrastructure projects in Jackson, which the legislature also created.

It was during the discussion of this item on the agenda that Ward 2 Councilman Melvin Priester asked if the council had to have all of its members present to vote on certain matters.

"Yes, if the Senate rules remain the same for next year, we need seven votes," Synarus Green, the City's director of policy and intergovernmental affairs, told the council. He explained that issues like public-private partnerships need unanimous approval from all council members, and that it depended on whether the rules remained the same for the next year.

The city council decided to go ahead and vote on all of the items, with the caveat that it could return to re-approve any items later on before the 2017 legislative session's deadlines.

"I am of the position ... that we should not support the raising of the gasoline tax without having an adequate diversion rate for municipalities and counties where the gas was pumped," Ward 4 Councilman De'Keither Stamps said. "And if (the state legislators) are going to ask us to tote the water for this endeavor, then we push back and say we want adequate diversion rate, because I don't want them to raise the gasoline tax, and then we have to go beg for it. We want some of that money to come back to the capital city. The way it is presently written, the majority of the tax leaves the city."

The Mississippi Department of Revenue's website lists the current gas tax for the state at 18 cents a gallon for all motor fuel and an additional 4 cents for "environmental protection." The tax is then absorbed into the state tax system, and a derivative amount of those funds eventually make it back to the city. Stamps wanted the City to demand a larger share of the money brought into the state for the gas tax, diverting the funds before they hit the state coffers.

He said that appropriate diversion rates for municipalities should be the priority for the city.

"I think that there is enough statewide support, looking at everybody's budget," Stamps said.

Ward 7 Councilwoman Margaret Barrett-Simon said that this and a larger cut of the sales tax revenue were integral to the Mississippi Municipal League's legislative agenda for this year. The MML is a nonprofit group of city leaders from around the state who meet to discuss and lobby for issues they have in common. She said that she believed the initiative from the city would show their collective support.

Green said during the meeting that he thought the resolutions send a clear message.

The city council, as part of its legislative agenda, will also ask the legislature to reconsider the way that the growth of the state government itself is being encouraged in far-flung parts of the Jackson metro area, and how the decisions the legislature and state departments make seem to push people away from the center of the capital out toward the outlying communities.

"The growth of the state, the way the master plan dictates the growth, has set us back," Stamps said, pointing out that people have to go to Clinton to pay their taxes and to Madison for a birth certificate.

"You should be able to handle all of your federal and state business in the capital in a reasonable walking distance. It really needs to be rethought for what is best," he said.

"Annually, there is a need to service more than 720 lane miles of paved road that encompasses and/or connects the 40 or more state-owned properties within Central Mississippi's metropolitan area at a cost of roughly $150,000 per lane mile," the resolution states, which means that if each lane-mile were redone each year, it could cost the city $180 million.

The city also estimated that there are 240 lane miles connecting those same state buildings that cost $500 a foot, or $2.64 million per mile, for a total of $62.4 million. Together so far, the city calculates that the state owes it $243.04 million per year for maintenance. The state does not pay that, of course, but the City proposed with another, separate resolution that the State dish out annually for the City directly in lieu of the taxes that those 40-plus buildings would incur if they were not exempt.

Finally, the City estimates that the 10 arterial bridges cost $23 million a year, based on Mississippi Department of Transportation numbers provided in the resolution. That brings the total bill for the State to be $263.04 million annually to the City of Jackson if it was to repair all of the roads and bridges that connect the state buildings in the City. All of these numbers are provided in the documentation provided to the council in their agenda packet from Nov. 29, available online.

"Routine maintenance programs are crippled by diminishing funds which then severely hampers the ability to adequately address infrastructure degradation issues associated with properties owned by the State of Mississippi," the resolution states.

Ward 7 Councilwoman Margaret Barrett-Simon said that Jackson is essential to the outlying communities, something that the legislature should keep in mind.

"As we have said before, Jackson is the goose that lays the golden egg," Barrett-Simon said. "And without all the amenities that we provide, I don't think that all of these bedroom communities would be as successful as they are."

"So I think this is timely," Barrett-Simon said.

The City of Jackson and its property owners need help funding the Jackson Public School District, and the city council wants the state to pick up some of the slack. In light of discussion about a change to the formula on the state level, Ward 4 Councilman De'Keither Stamps said that the council should push back against efforts to hold back Jackson's students.

"The MAEP formula has not been funded for some time, slighting the students of Jackson by a little over 100 million (dollars) every year," Stamps said.

The council passed the measure unanimously.