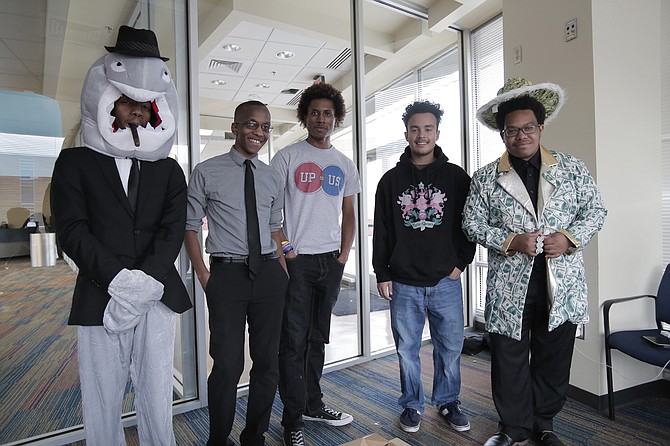 Javan Davis, Samuel Lewis, Jaquan Walker, Gerson Guevara and Terrence Dillon (pictured left to right) make up the Up to Us team at Jackson State University, which is raising awareness on-campus of the national debt. Photo by Imani Khayyam.

JACKSON — A group of Jackson State University students is working to educate its peers about the nation's growing national debt and how it affects their financial futures in the U.S.

Javan Davis, Samuel Lewis, Jaquan Walker, Gerson Guevara and Terrence Dillon make up JSU's Up to Us team, which campaigns and raises awareness on campus about the country's national debt. As part of the national Up to Us program, college teams collect student signatures for a petition that asks lawmakers in Congress to take action to address the national debt.

JSU is one of more than 70 universities with a team that is competing to collect the most signatures for the petition.

The JSU team won second place in the first challenge, which was called My Two Cents Day. In it, the group held a raffle, where the students had to sign the petition to enter the raffle; one student won the $50 giftcard. They collected more than 900 signatures so far and will continue to collect signatures on-campus.

"That's a big chunk of our student population, considering (that) we're going up against universities like Penn State," Guevara said.

On Friday, Dec. 2, the JSU Up to Us team hosted a Solve the Debt game night, which featured casino-style games with only debt-related questions such as the Wheel of Debt and the Debt is Right. Students learned about the national debt and could win gift cards as prizes.

The JSU team will continue to raise awareness about the national debt in the coming months. The students will talk to lawmakers at the Capitol and present information about the nation's debt in classrooms.

Dillon said that understanding the country's debt is personal for him because it goes back to managing money.

"Debt itself isn't bad (like home loans), but there is an issue with allowing yourself to accumulate too much debt (that) you can't handle," he said.

Guevara said being a part of the team has been a good educational experience. He said it's important for students and young adults to understand that the U.S. government will likely be in debt most of our lifetime, and he said it's just as important to understand what that will mean for Social Security, Medicare and Medicaid.

"These are the things we are going to have to deal with as adults because we might not have the money to use on (those services) as we do right now, and we don't want to work until we're 70 or we drop dead," Guevara said.

For Lewis, he said the debt is important because it's about what U.S. citizens want the government to fund, like education or transportation.

"For me, at least, it's about what we want our government to do for us. If we want education, social security and or better infrastructure, we have to hold our politicians accountable. They can't just go through and spend all our money," Lewis told the Jackson Free Press.