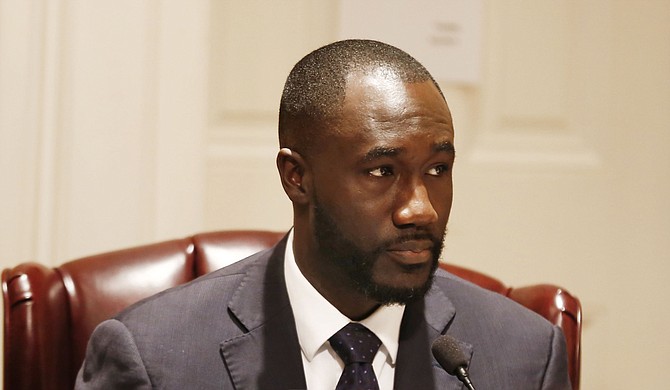 Mayor Tony Yarber proposed his budget to the Jackson City Council last week, shooting for a $7.4-million decrease in spending across the board. Photo by Imani Khayyam.

JACKSON — The takeaway from the week of budget discussions is that people will lose their jobs.

Last week, Mayor Tony Yarber presented his proposed 403-page budget to the Jackson City Council for review, which the members did through a four-day gauntlet of meetings with the various departments.

The collective challenge for the administration and the council until their Sept. 13 deadline to complete the budget will be to determine which services survive the necessary $7.4 million in cuts needed to balance the city's budget.

Whether it meant cutting services, positions or purchases, department heads described to the council their techniques for hitting their shared burden in meeting the statutory requirement for the City of Jackson to create a balanced budget.

But no matter how you frame the discussions, the City must find deep cuts.

The Mayor's office includes support administrative staff for that office, who also promote the City of Jackson on state and federal levels. With restructuring, the office will shrink from its current staff of 10 to seven, including doing away with a currently unfilled position.

"Currently, we operate with 10 employees, but we are budgeted for 11," Yarber said during the hearings. "So our fiscal-year 2017 employees for the mayor's office will decrease to seven employees, and we believe that we will still be able to ensure efficiency while saving money and maintaining the integrity of our customer service."

Yarber said he hesitated to say which positions would be affected until his office had the chance to inform the people in them. "By the 25th (of August), all those affected will be notified," Yarber said of the cuts throughout the city government.

Current Chief Administrative Officer Gus McCoy, who came in with Yarber's administration, announced during his budget presentation that he was leaving, amicably, at the end of this month. His office "implements policy directives of the Mayor and manages the daily operation of City Government," his presentation stated, but the office had to cut one position, leaving them with three employees. The office reduced its budget by $73,302.75 to $313,452.

"It was truly amazing experience that I did not take lightly," McCoy said, addressing the mayor, "and my intent was to honor you and the position through my service and dedication."

McCoy said he hoped that the relationship between his office and the council would continue past his tenure. He recalled back to his first days with Yarber.

"Every goal, each initiative and every program that this mayor pushed for and implemented can be summed up in a single statement he made on his first day, which I took to heart. He said that we would leave things better than we found them. And that was the goal with how I served with that office," McCoy said.

Yarber said he would not appoint a permanent replacement for McCoy until after the elections in the spring.

This office is responsible for fielding inquiries from the public as a part of the 311 program that allows the public to either to record complaints or to reach the appropriate city department. It has operated with two fewer staff members than the 12 included in the previous year's budget, and now will shrink to eight staffers. The proposed budget is $598,777, down $156,178.81.

"At the end of the day, if you have two people doing the same thing and that job can be consolidated to one person, then you are not getting your bang for your buck if that job is not consolidated," Yarber said.

Vance said the department would maintain 418 officers, which is less than the 500 the Linder-Maple study recommended in 1998. Yarber often references that recommendation publicly, the last time during his 2016 "State of the City" speech.

Ward 1 Councilman Ashby Foote said he was against any cuts to the department.

"I don't think we should cut police at all," Foote said. "It is discouraging to me with the challenge that the police forces across the country face today."

Much like the JPD, the Jackson Fire Department found a lot of its savings in its budget from shrinking budgeted yet unfilled positions without cutting any currently employed firefighters from its current roster of 336. Fire Chief Ronerick Simpson told the council that by doing away with 12 of the 22 currently vacant positions, the department will reduce its budget by $1.4 million for a proposed $20,140,585.

One achievement for the fire department was reductions in overtime to two divisions for a total savings of $45,000. "We were able to accomplish these reductions through management and adjustment of shifts," Simpson said.

The Human And Cultural Services Department cut $1,662,076 from the previous year to $8,892,552. The proposed restructuring included cuts to the Jackson Zoo, the planetarium, the art gallery and Smith Robertson Museum and Cultural Center, as well as a complete defunding of the summer youth employment program.

The City had a contract with the zoo to provide $880,000, but this year the proposed allocated amount for the zoo sits for the moment at $750,000. It is not a final amount, but at the moment it could mean difficulties for the zoo, Executive Director Beth Poff told the city council.

"We had already cut to the bone last year," Poff said during a phone interview on Aug. 19. Poff said that the zoo might have to cut its operating hours to save on personnel costs if the proposed budget cuts pass.

The largest department in the city, Public Works, faces a $20,333,445 decrease in its projected budget for the next year, down to $278,405,307. About half of that is in the revenue drop from the water and sewer fund as a direct result of the City's struggle to wrangle the current billing system.

Director of Public Works Jarriot Smash said the department is working with Siemens to resolve the problem and will begin to turn off delinquent accounts.

Smash said that seven positions normally allocated out of the general-fund revenues will be cut, 21 positions cut from the water and wastewater divisions and for solid waste seven positions will also be cut.

"Our basic summary here is our key focus is revenue generation and an increase in collections," Smash said.

He added that the City's "renewed approach" to working with Siemens centers on bringing more revenue into the City.

This department, like public works, encapsulates several large services, including JATRAN and other transportation, as well as the permits and zoning divisions. As such, the cuts to the department, a total of $2,733,255, were stretched across the department. The transportation budget, $11,350,810 for this year, is down with a 12-percent reduction of JATRAN maintenance.

"This year's planning budget is conservative to say the least, but with the resources we have available we remain confident in our ability to achieve these goals," department Director Eric Jefferson told the council.

The good news is that JATRAN will receive two additions to the fleet early next year. Currently, the department is in talks with the Federal Transit Administration to find ways to bolster the fleet, which is running with 12 buses "hard-down," or out of service due to major mechanical malfunction.

One of the smallest departments of the City, the Internal Audit Division, cut one of its employees to fit the requested budget reductions, saving $40,863. The office is responsible for oversight of spending practices and financial management for the rest of the City administration, and the reduction put its budget at $163,362 for the three remaining employees.

This was one of the few departments during the budget hearings that the mayor expressed a wish to replenish with funds if necessary to ensure that the current budget and correct financial practices were adhered to during the next year. Yarber said he wanted to bring back resources to the department.

"We think that we will be able to find those in savings and come back to council for revision to add that additional staff person because we just cannot at this particular point afford to not to have this division up and running, because this will be the division that helps us save money in other places," Yarber said.

Office of the City Attorney

This office asked for an increase from their previous year's budget but not to expand their staff or other usual expenditures. Instead, they asked for an increase in the two areas of their responsibilities as chief litigators and risk managers for the city: property insurance and proposed legal claims against the city. City Attorney Monica Joiner said that the increase to the legal claims is because of old cases that are finally coming to fruition.

"I think we have to keep good track of what is still out there and what is still to come," Joiner said, adding that her department will work with the finance department to plan ahead for these possible expenditures.

For the next year, the city attorney asked for a $1,925,000 increase for claims, a response to a $667,985 increase in claims for 2016. The property insurance for the various buildings the City manages also increased last year by $1,011,269. The trend continues this year as the department requests a $77,154 increase. To offset the increase, if slightly, the department also reorganized three positions for a total $113,416 in savings.