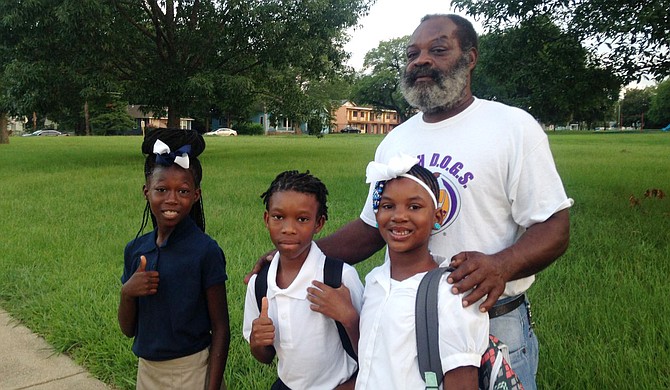 JACKSON — Early this morning, a handful of bright-faced elementary-school students and their tired but happy-looking dads participated in the Million Father March from Jackson Public Schools' Enoch building to Poindexter Elementary School.

The Black Star Project, a Chicago-based group founded to fight the racial-achievement gap in schools in black and Latino communities, established the nationwide event with the goal of getting dads to take their kids to school on the first day; in JPS, the WATCH D.O.G.S. (Dads of Great Students) took up the charge in organizing the march. Though Poindexter students enjoyed a physical march, JPS encouraged dads and other male family members and caregivers district-wide to bring their kids to school on the first day.

"We participated in the Million Father March to invite fathers to come and invest early in their children's education—the earlier the better," said Fredrick Nolan, JPS' district-wide WATCH D.O.G.S. coordinator. "It was a no-brainer when we received the information on how to participate."

The district welcomed WATCH D.O.G.S., a national volunteer program founded in 2003 to get fathers and other male family members more involved in the school success of their children. Not every school in JPS participates in the WATCH D.O.G.S. program; Poindexter principal Dr. D. Antrice Smith says her school hopes to revitalize its WATCH D.O.G.S. group in order to increase father participation in school-volunteer programs, in which the school's moms make up the majority of participants.

"Moms are always here from the PTA to room mothers," she said. "We want to open up our doors to fathers as well."

Evelyn Townsend, a longtime Westside resident with many grandchildren at Poindexter Elementary, says the impact of a dad's presence varies from child to child. Still, she says, it would have been nice to see more dads there.

"It's something about kids and dads that's a different bond—makes kids feel protected," she said. "But when it comes to school, it's going to fall on moms, no matter what."

Dennis McCollum, a first-grade teacher and the school's WATCH D.O.G.S. coordinator, says he sees firsthand the impact that having their dads involved with their schoolwork has on children.

"It makes a tremendous impact," he said. "They want parents to see what they're doing in school. Research shows that children tend to do better when dads are around. And even when it's their uncles and grandfathers, they get excited."

A 2014 University of Florida study entitled "The Hidden Benefits of Being an Involved Father" reports that involved dads, whether or not they live with their children, have a positive impact on kids' scholastic achievement. When their dads are invested in their academic lives, kids are happier and have better chances of graduating from high school and going to vocational school and college.

Dashawn Davis, a 36-year-old father of two Poindexter Elementary students and a three-year member of Poindexter's WATCH D.O.G.S. group, says it is important for dads to show up for their kids. Not all kids have dads who can be there, he said.

"I participate to show my kids I'll always be there for them—even for the little things, like the first day of school," he said.