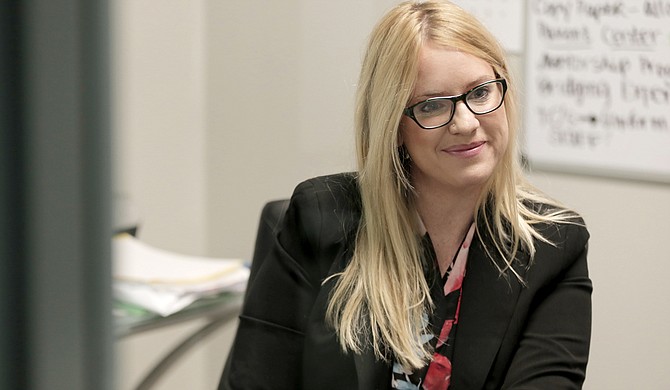 JACKSON — Josalyn Filkins has only been in Mississippi since July 5, when she accepted the job offer of principal at Midtown Charter Public School in Jackson, replacing former principal Jemar Tisby. So far, she says, the community has been exceptionally welcoming, and that Sylvester's, a barbecue spot in Raymond, is hands down her favorite place to eat. The food in Washington, D.C., where she worked before as a charter-school principal, has nothing on the food in Mississippi, she says. But Filkins does not project her job to be a cakewalk. Tisby's administration left shaky conditions at Midtown, with an exodus of teachers, leaving instructional slots open at the school even during the regular school year.

With community champion Midtown Partners Inc. providing a bevy of services to community members, the charter school serves fifth- through seventh-grade students in that neighborhood, even though the charter law has expanded to allow students who don't even live in Jackson the opportunity to attend.

When Filkins sat down with the Jackson Free Press, she talked about her plans for the future of the school and for engaging with the community as Midtown tries to move forward amid potential litigation against the charter law, and as legislation opens the doors of the charter school to kids who don't live in Jackson.

Tell me about your childhood.

I'm originally from outside of Chicago. I'm from Joliet, Ill. I went to Illinois State University. I studied education, of course. From a young age I knew that I wanted to be a teacher, and my mom kind of pushed me a little bit further. She would always say, "you know, why don't you run the school? What about being an administrator, what about being a principal?"

But I knew that in order for me to be able to really lead a school with fidelity I had to have all of the moving pieces that go into being a principal. In order for me to really guide and lead teachers, I would really have to have the experience of being a teacher to say, "hey, I've been in the trenches, I get it. These are the things that work, (and) these are the things that don't." So let's move toward really making sure that we're building student achievement to full capacity.

Were you in regular public schools or charter schools?

I started in traditional setting and then after I went through all the steps of growing myself as a leader, I then transitioned into becoming an assistant principal at a charter school. And then I became the founding principal of that (charter school's) middle-school site, and got it off the ground running. I moved to D.C., and I really loved D.C. and all the things that they were doing in the charter community, but there was an opportunity in Mississippi, and I was really excited to see how there are two charters that just started in Mississippi and they're gaining some steam. There are some great things happening in Mississippi for the community members of the state, and I'm like, let me go ahead and get on board. See what I can do.

As soon as I interviewed with Midtown I just fell in love with the community. It's just a different vibe, very much at home, welcoming and kind. Wherever we're moving in charters, I want be a part of that to show the community we're all public entities, and we're all here to give kids choice and do what's best for students and just keeping kids first.

Have you hit maximum enrollment numbers for the school year?

We have nearly full enrollment for sixth and seventh grades, but we have a few slots open for fifth grade still. We're trying to get those enrollment numbers up however we can. We're trying to make sure all the students have a choice and to let the community know that there's a choice for them. We really would like to do 52 students at each grade level.

The model we want to focus on is having smaller class settings for the students to give them that individual attention and intervention. We've reworked the master schedule so there is an intervention block to support them and get them that very specific targeted instructional time. (We are) using the data to say, OK, there are certain strands that each student is struggling in; let's make sure we're giving them the instruction they need to support them in growing in those areas.

How are you doing with community engagement with parents?

The best part of Midtown Public Charter, I would say, is the fact that we have Midtown Partners. I feel that Midtown Partners is such a valuable asset to us. We really need to ensure that the parents know that they have all of those resources at their fingertips. The GED program, the daycare, the Montessori school, there's clinic times, there's dentistry, there's all these resources in this community that they can tap into.

So really a personal goal for me this year is to make sure those parents understand and utilize the resources that they have for them. I have a parent academy that I'm running the first Wednesday of every month. I really want to focus on helping the parents to be comfortable in the Common Core, understanding Common Core math questions, the literacy piece of it, and additionally I'm going to try to bring in some of our Midtown partners.