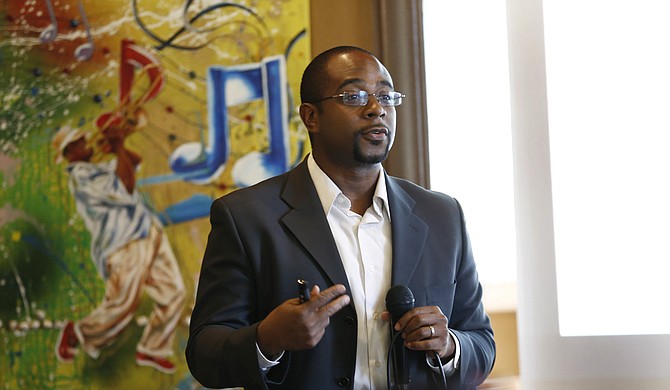 Jemar Tisby is acting as the interim principal of Midtown Public Charter School, after the resignation of Adam Mangana, the founding principal of the middle school. Photo by Imani Khayyam.

Midtown Public Charter School is looking for a permanent principal, after the original head of school resigned in early October. Jemar Tisby replaced Adam Mangana as the interim principal of Midtown Public Charter School on Oct. 8. Mangana was hired in April and helped start the school, working with the founding group of teachers this past summer to open the stand alone charter school in Midtown this fall.

Tisby told the Jackson Free Press today that Mangana resigned on amicable terms, and he is grateful for Mangana's work founding the charter school. Tisby said his role as interim principal is temporary—the charter school’s board is forming a search committee to look for a permanent principal. Tisby has been on the board since fall 2014.

Tisby, originally from the Chicago area, was the chairman of the Midtown Public Charter School Board. (He will now be a non-voting member of the board). He was tapped to act as interim principal due to his experience teaching in KIPP Charter Schools in the Arkansas Delta. Tisby taught at KIPP Delta schools in Arkansas for four years and worked as the principal of Delta College Prepatory School for three years before moving to Jackson in 2011. He graduated from Reformed Theological Seminary with a master of divinity degree in 2015.

"It's been fun being back in the classrooms," Tisby said.

Mangana did not respond to voicemail messages to comment on this story.