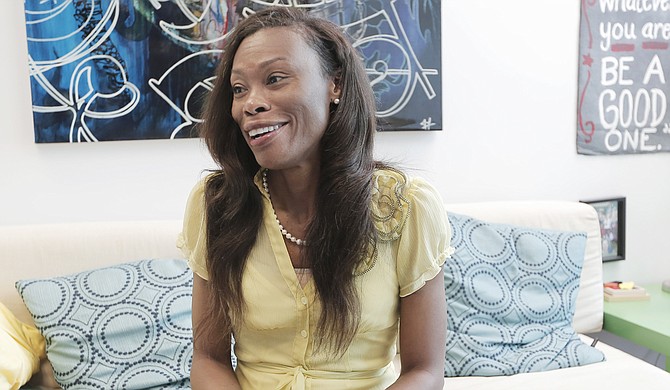 A. Shae Buchanon-Williams is a U.S. Marine Corps veteran, financial adviser and business owner running for the District 72 House of Representatives seat. Photo by Imani Khayyam.

JACKSON — A woman of many trades A. Shae Buchanon-William is a U.S. Marine Corps veteran, mother and business owner. Buchanon-Williams works with communities in Jackson and around the state through her multiple business ventures including tax, reinvestment and construction businesses.

"I assist people with avoiding foreclosure, so I help them with financial literacy programs and teaching them about credit," the 42-year-old Jackson native says.

Buchanon-Williams started working on tax returns for members of her family at the age of 16, as a punishment from her mother, but later she turned that skill into a business. Shortly after graduating from Forest Hill High School (she attended Lanier High School her first three years of high school), Buchanon-Williams joined the U.S. Marine Corps and was stationed mainly in southern California during her three-year tenure from 1992-1995. She was injured during her service used the GI Bill to go back to school. She bounced around the country working on her degree, and eventually she graduated from California State University at San Bernardino with a bachelor's degree in psychology. She later got her master's degree online in health psychology from Capella University.

Buchanon-Williams, who teaches seminars on financial literacy, said that a strategy called "PPE" is what's missing in a lot of youth and adults she works with in her businesses.

"You Plan, you Prioritize, then you Execute, and I think that's what we're missing especially with our youth and adults that I see. They know what they want to do; it's just someone (needs) to help them put the plan in place," she says.

Buchanon-Williams says "PPE" also helps explain where the state of Mississippi is.

"I think if we could put those things together, we could see Mississippi make a huge turnaround in this state, and it's the youths' time to do something and get out there now and not later—now," she said.

Buchanon-Williams moved back to Jackson in 2009 and continues to run her three businesses and raise her four children in north Jackson.

Why are you running to represent District 72 in the House of Representatives?

I can do exactly what I do in the community without being a politician, but I prayed about it, and God says, "You know, you essentially are a politician, just not an elected official." Everything I've been given, everything in my life, my experiences and things: it wasn't given for me, and I have comfortably served the communities all over the state without any pressure. I think it is time for me to utilize those skills to help further our state. I started in the 10th grade helping to do things with teen pregnancy, and I just think it's my destiny, and that's where I'm supposed to be and the next area where God wants me to serve—and that's in our state Legislature.

I think we're missing a lot of things in the Legislature, and God is definitely one of them. Do we consult him in all that we're doing? Do we do this because it's the right thing to do? So I just think that what my skills, my experience and my tendency to build collaborations and build co-operation—not corporations—co-operations and partnerships, that that's what we need in the state legislature.

That's why I'm running, and I want to make sure that I serve my people well, and that's not just District 72, that's the entire state. There's a lot of issues (like) women's issues, financial issues that I think we're forgetting about. We're talking a lot about infrastructure, but we have people that are hurting in this state, and they don't know where to turn. They have no idea where these resources are coming from, and a lot of times when they find out about the resources, it's all gone, or it's been reallocated.

Veterans are very important to me. There's a lot of money that comes to the state for veterans, and a lot of times by the time we find out about it, it's gone, or it's been reallocated, or we didn't use it so we lost it. I'm usually the person who does a lot of the research, and (I have) a lot of the close ties to HUD and these federal agencies where this money comes through. There's a lot of organizations that I'm a member of that bring these resources to the state, and through me, I think I'm the avenue to bring those to the constituents.

It comes to the state, but now what? And how do we know who needs it? And I know a group of people who need it, and that's my district. And definitely, African Americans who are hurting, who don't know where to turn, and are wondering, you know, "what do I do about the school system? Do I try to get on the school board? What do you actually do as a state representative? Can you help me with the streets?"

I have never been a teacher before, professionally, but I call myself a teacher because every time I step into a room, I'm teaching either about life or about finances or home ownership or what's important to families. Family strengthening (is important); a lot of the families break apart because of finances, and it's time for that to stop. It's time for us to lend a hand as legislators to keeping our family units together, it's going to make better schools and better kids when their families stay intact when they know they have a place to go to and lay their heads down, they don't have to worry about moving all the time or mom and dad losing their jobs.

What is it that we can do about jobs? Making sure that our school system is up to par so we can become very attractive to these large corporations—and we don't have to give away the bank to get them here. We have an obligation to our colleagues in the House, all 122 of us, we're creating policy and addressing public policy, but what about the people? And I think you have to be a candidate and strong person who can function on this side of the fence with your colleagues but can also identify on this side of the fence with the people who vote for you and who you are serving.

What does District 72 need the most right now?

I have so many things in my head, and it didn't come from me—but it came from the constituents that I've been talking to. I can tell you, they're complaining a lot about the roads. They're complaining a lot about the education system—and access to healthcare. Our seniors are worried about growing old gracefully—in their homes. My grandfather was 102 when he died, but he didn't get sick and die until he was in a nursing home.

Through advancements like telemedicine, awesome, where you have a senior where it's not really life-threatening right now, but if left untreated, it will be. They can go on whatever device that they can connect with a doctor and tell them what's going on, and the doctor in turn can send the prescription and it's either mailed to them or there are services that can pick it up and bring it to them, keep them in our homes and keeps our neighborhoods and communities intact because we need their voice.

We need their leadership; we need their wisdom and their knowledge in order to continue further, when I tell you that it takes a village, it does, and that's not just a village of us young people. It's a village of the wisdom and the knowledge of the days of old that we need, and while we're working and trying to make a living, they're trying to keep the younger generation—like my kids—in line when I'm not there. Those are the issues to me.

How would you propose policy if elected or advocate for those issues in your seat?

The first thing I'd do is take a look at policy that's already in place. With respect to medicine, sitting down with our governor and really having a talk about what's needed in our areas. What may be needed in 39211 is a totally different thing than what's needed in 39206 because the demographics are a little different, the incomes are a little different. So sitting down and making sure—before we propose all of these bills and just write a bunch of bills—I want to make sure that it has an impact on the lives of the people that are served.

So I would carefully look at policy, carefully look at statutes, where there can be some easy feats we can tackle first. We have to come up with ways and adjustments that not always involve policy changes because there's things we could be doing when we're not in session—so we're armed with what we need when session time comes. Armed with the knowledge that we need to lobby and speak with our colleagues (to) say this is what we need and this is why we need it and see how we can collaborate to make Mississippi a better state.

If you could pick which committees you were put on, which one would you prioritize?

Banking and Finance. There's some issues in banking and finance that I would like to address especially for the unbanked and making sure that they have somewhere to put their money. Right now, a lot of these debit-card companies and check cashing places, they're gaining millions hand-over-fist from the unbanked, and a lot of the times, they are unbanked because they probably messed up another bank account or something. There's things we can put in place where they're (companies are) not allowed to do certain things, where their bank account is not allowed to go into overdraft or they're not allowed to swipe their card. Housing (a committee that's only in the Senate) and Banking and Finance are the two that I would definitely choose to be on. But Banking and Finance on the House side is definitely where I would want to be—and Education.

What separates you from the other candidates running in this race?

Number one, I am a veteran of the United States Marine Corps, and one thing we know about veterans, especially Marines, is that we never leave our post until the job is done. I would say (with) all of my community involvement, I've been in the trenches with the people we're serving. I hear their cries, I see their credit, I see what's happening to them on the home-front, and that makes me a lot more empathetic than most. I would say also my experience all over the United States (sets me apart). I've seen other programs and how they're working.

I build coalitions; that's what I do. I don't build models that appear to be a coalition but really it's for the betterment of just my little group for someone that's already in power. I'm running my own race, you know.

This interview has been edited for clarity and length. The District 72 House seat election is set for Aug. 23; a runoff, if needed, will be held on Sep. 13. For more interviews with candidates, visit jfp.ms/2016elections. Email state reporter Arielle Dreher at [email protected].