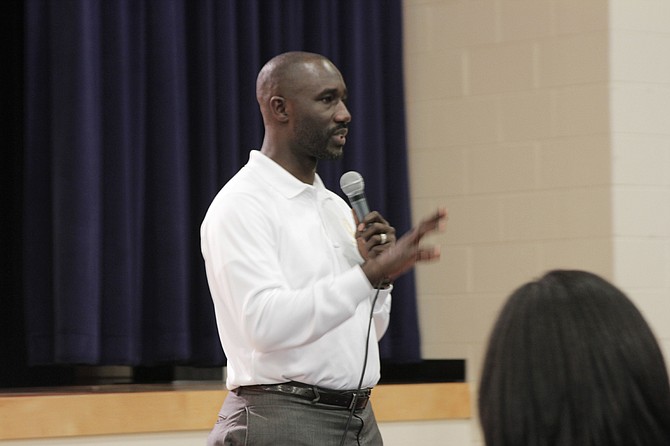 Me Pearl Wallace slowly explained to Mayor Tony Yarber how the pothole in front of her house fills up with sewage, rainwater.

"Every time a car drives through it ..." Wallace said in a soft voice, barely audible in the echoing gymnasium of Cardozo Middle School. Members of the crowd seated in the back, some taking notes, some holding their cell phones aloft to record the meeting, leaned in to catch Wallace's words.

She motioned with her arms as if she is scooping up the water in the pothole, throwing it up in the air, saying so gently, "and all that doo-doo is in there." She repeated a refrain of car damage and busted tires, a tale Jacksonians often tell. "I have had three tires lost."

Yarber announced that night, April 26, the beginning of what he described as a "pothole blitz" across the city, addressing and fixing potholes on select streets in each ward. During the "Listening Tour" gathering, he addressed many issues and questions from citizens, but potholes and infrastructure were easily the central concerns.

"The potholes on my street are just like the potholes on your street," Yarber said during the meeting. "I have the receipts from the front-end alignments. We can prove it."

Yarber said the pothole patches, which the 1 percent sales tax partly funds, are early efforts to chip away at mounting infrastructure costs, estimated at $2 billion. The mayor said years of planning have gone into attacking the problem.

"We wanted to be smart, y'all," Yarber said. "We didn't want to get caught in a situation where we were playing with your money just so we can get you quiet in order to start talking about an election."

The City issues a statement the next day saying that pothole-repair teams would be moving around the wards in the order derived from "311 Action Line calls and prioritized based on the urgency of the repair."

"Beginning this week, Infrastructure Management will focus all resources in a single ward each day to accomplish as many repairs as possible," the press release stated.

The administration is leveraging the new Open Data portal it has touted in the last few months to determine which wards have the most 311 complaints. The 311 section of the website allows the user to select which ward's complaints to view, even allowing a comparison by hovering the cursor over the interactive map included on the site.

The complaints logged on the Open Data portal end mid-2015 and seem to go back as far as the early 2000s. Ward 7, mostly centered in southeast Jackson, has the most, with 16,500 complaints. Not surprisingly, most of the scheduled pothole repairs are in Ward 7, although some do fall in the neighboring Ward 6, which boasts 12,000 complaints. (Not all of the complaints have to do with potholes, however, so this is a rough estimate.)

Calls for comments to City communications were not returned, and calls for comment from the Infrastructure Management office in the Department of Public Works inquiring about the order of the pothole repair "blitz" were redirected to the Clerk's office and to the online Public Records request system.

The press release also states that work on the Hanging Moss Road Bridge begins this week as a result of the 1 percent sales tax. "The bridge has been closed since late 2015 due to structural damage. The construction is expected to take up to six weeks," the released stated.

Yarber emphasized patience over haste when it comes to addressing the City's looming infrastructure problems.

"What I've learned is that you always have to manage expectations," Yarber said. "Nobody gets diagnosed with an illness today and then walks into the doctor's office tomorrow, and you are cured."

"As we move forward with the long-term Capitol Improvement Plan," the press release from the mayor's office Wednesday stated, "we want to address critical road issues our citizens face on a daily basis. The 'Pothole Blitz' will help in this effort. We are excited to be at a point where residents can see their tax dollars at work."