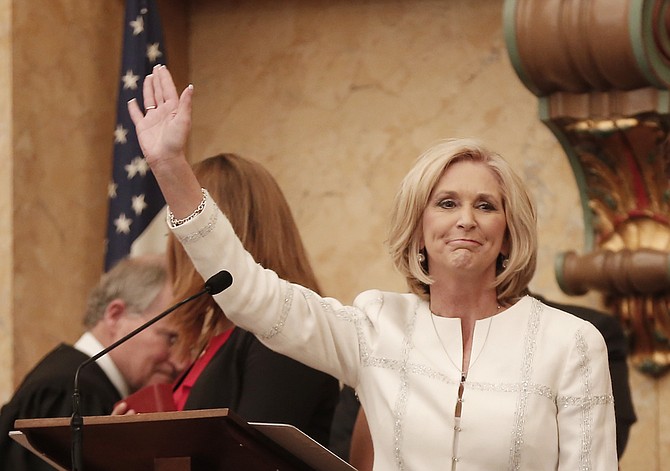 State Treasurer Lynn Fitch sent a letter to legislative leadership last Wednesday expressing concerns over the state's debt service, after the Legislature passed a bond bill in the final days of the session. Photo by Imani Khayyam.

JACKSON — State Treasurer Lynn Fitch wrote a letter to Lt. Gov. Tate Reeves and House Speaker Philip Gunn on April 20, the day the Senate went home, saying she was "deeply disappointed" with some legislative actions, including the bond and debt service appropriations bills, which she says will force the state into one of two "bad options" down the road.

In her letter, Fitch wrote, "the State will now be forced to choose between two bad options in order to keep from defaulting our debts. We can either seek a deficit appropriation next spring to cover the shortfall created by SB 2918, or we can draw the missing $31 million from unencumbered funds in the State treasury."

Senate Bill 2918 is the debt-services appropriations bill, which calls for $392 million from the state's general fund and $111 million from state special funds to cover debt service. In her letter, Fitch says there is no way for her office to generate that $111 million—and at most could generate $80 million. 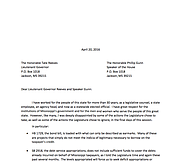 "We are $31 million short of what we will need to maintain the integrity of the full faith and credit of the State," Fitch says.

The bond bill, House Bill 1729, would issue several bonds for college infrastructure projects as well as the 2 Museums project. Fitch says the bond bill will cost the state $308 million—not $250 million as originally reported. Her letter says that several of the earmarked projects in the bill "seem to be recurring."

"We do not borrow on the taxpayers' credit card to fund recurring expenses," Fitch wrote.

Fitch sits on the state's bond commission, which has to approve of bond bills from the Legislature. The other members of the State Bond Commission include the governor and the attorney general. Fitch wrote that she intends to request individual resolutions on each of the earmarks in the bond bill.

Lt. Gov. Reeves denounced Fitch's concerns last week, and said that while the bond commission may not approve some projects listed in the bond bill, her assessment of the legislation's affect on the state's indebtedness is wrong.

"Where she's embarrassingly wrong, and I think irresponsible is in talking about what the total package means to the overall bonded indebtedness of the state, it has been my goal in my five years as lieutenant governor—and we have been successful—that we never authorized a number larger than we are paying off in any one year," Reeves told reporters last Thursday.

Reeves reiterated that Fitch did have some valid points about some projects that have received bond approvals over the years, like the 2 Museums project, which he said he voted against when he was state treasurer. Now, however, he said it's important to fulfill the previous administration's commitment.

"When I was treasurer, I actually voted against the two museum project but I felt like the commitment was made by the previous administration and it was important that we fulfill that commitment and we did," Reeves said.

Fitch ended her letter reminding leaders of the Continental Tire and coastal shipyard bond bill, passed after a special session called by Gov. Phil Bryant early on in the session. With the state's bond bill and the Continental Tire bonds, Fitch says the Legislature has passed a total of $582 million in bonds this session. An April 1 report values Mississippi's bonded indebtedness at $4.393 billion.

The treasurer was not available for additional comment today at her office. Today is Confederate Memorial Day, and state offices are allowed to close at the discretion of the executive head of the department or agency, the secretary of state's holiday notice says.