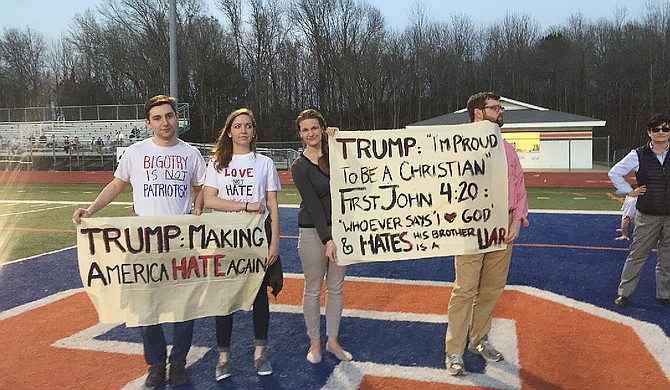 Madison taxpayers paid at least $11,565.44 in security expenses for a March 7 political rally for Donald Trump, public-records requests have revealed.

The City of Madison reported paying at least 235 law-enforcement personnel overtime hours at an average rate of $34.50 per hour, totaling $8,107.50. They also paid $1,292.64 for lunches, water and snacks for public-safety workers, including City of Madison fire and police personnel, as well as other public-safety personnel from other jurisdictions. The City paid $2,165.30 in Fire Department overtime.

Aregood said individuals and groups that want to rent a facility through the Madison County School District are required to fill out a "Use of Facilities" form and show proof of insurance, and then pay an hourly fee. "If the facility is available that day and they have all their paperwork in order, it's generally not a problem," she said. The school district did not provide any security detail for the Trump, she added.

Madison City employees were not the only law-enforcement personnel at the event, although it is the only government agency that has provided a breakdown of the cost to taxpayers for security.

After the rally, the Jackson Free Press reported that Phillip Rollins, also known locally as DJ Venom, said that a uniformed Mississippi Highway Patrol officer escorted him outside the Madison Central High School auditorium because he was wearing a Malcolm X cap and a Black Panthers comic t-shirt. As it happened, Rollins said, Trump supporters around him pointed and shouted, "Get him out!"

Kicking protesters out of political rallies is constitutional, Mississippi College law professor Matt Steffey said. "Of course you have a right to peaceably assemble, but I don't have a right to peaceably assemble at your house or at your private function," he said. "Citizens have First Amendment rights only against the government, and chances are that (Trump), being a private citizen, can make any decision about whom he wants at his rallies."

Political conventions and rallies are (usually) private events, and in most cases they are ticketed, Steffey said. "Depending on several circumstances, Trump may be allowed to exclude whomever he wants from his political rallies, he said.

But who decided to eject someone from the rally could make a difference in whether the action was constitutional. "It matters who took the action to escort (DJ Venom) out and why they did it," Steffey said. "If it's the government that made the decision, then the First Amendment applies, and it matters why they did it. If it is solely a private function, then it's probably a tempest in a teapot."

It wasn't unusual that Mississippi Highway Patrol officers were on site, the agency said. "When any type of dignitaries at the federal level visit, (Secret Service) always contacts Highway Patrol," Capt. Johnny Poulus, director of public Affairs of MHP, said. "This is protocol ... it goes from federal to state level when any type of security is involved."

Since security for the event was protocol, Poulus says there are no records of payment from Trump or the City of Madison. The state agency drafts a yearly budget, which is then proposed to the Legislature for approval, he said. After approval, funds are allocated to districts across the state.

That could mean that an officer paid by taxpayers escorted someone out for wearing a certain cap or shirt. Steffey said law enforcement should always set up a designated free-speech area setup nearby.

"Stand on the sidewalk outside of (the rally)," Steffey said. "It's hard for a lot of people to get their mind around it ... but it's a private event."

Mayor Mary Hawkins Butler of Madison did not respond to messages. Hawkins Butler endorsed Trump and gave him the "key to the city," he said at the rally.