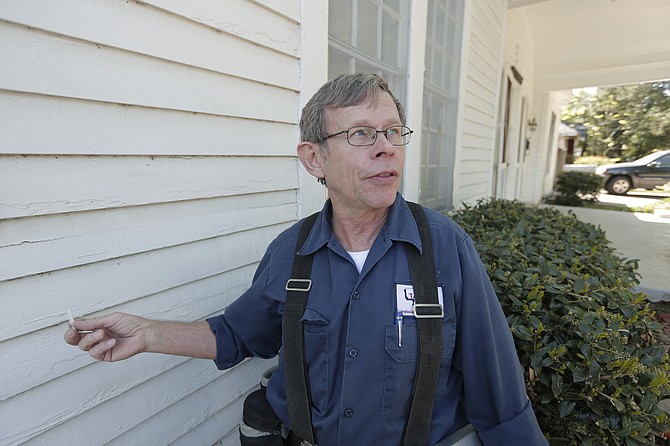 JACKSON — While Jacksonians worry about whether their pipes are leaching lead into their water, those who live in the oldest, poorest sections of the city have been living with the threat of lead for years.

"In Jackson, about 70 percent of our occupied housing stock was built prior to 1978," Catherine Lee, project manager for the Green and Healthy Homes Initiative Jackson, said April 1. The Consumer Product Safety Commission banned the residential use of lead-based paint that contained greater than or equal to 0.06 percent of the dangerous substance in 1978.

Lee estimated, based on census data, that around 52,653 housing units fit into that time period, and every one of those homes, without some plan for abating exposure, could have lead paint on their walls, slowly releasing tiny amounts of lead into the air, food and water.

"It's overwhelming when you think about it," Lee said.

These older homes have a higher chance of containing lead-based paint, as well as pipes that might contain lead solder. Lee said that the city's housing was built in a series of concentric circles starting at the center and moving outward until the suburban spillover in the 1970s and '80s.

Some older areas, like Belhaven, have homes built prior to 1978 but have been redone in recent years. Therefore, they are less likely to have lead-based paint. Lee said, even though most of Hinds County is considered to be high-risk for lead poisoning, additional factors like whether there are children in the home and poverty increase the risk factor.

"The rest of the housing units in Jackson, outside of those higher income areas, are more vulnerable, more likely to have lead-based paint in them still because the communities don't have the resources they need to abate the units of lead paint," she said.

The problem then is that lead exposure is an environmental concern. While residents may receive a very small amount from a water source, compounded with other sources such as lead paint, that exposure can lead to health problems over time both in children and adults.

"You have to add that to the lead that shows up in your food, add that to the lead that's in your air," Dr. Howard Hu, dean of the Dalla Lana School of Public Health at the University of Toronto, explained during an April 1 phone interview. "The real argument is how does society control the totality of lead exposures ... you have to ensure they remain as low as possible."

The effects of lead, even in very small doses, on children has been a public concern for decades. That is why the Mississippi Department of Health issued warnings in January and early February advising pregnant women and small children not to drink from the Jackson public-water supply.

Hu said lead in adults contributes to kidney issues, including premature failure, and hypertension, a major risk factor for heart attack and stroke. "A third domain of problems is that lead clearly accelerates declines in mental functioning in adults," Hu said, including loss of "short-term memory and verbal memory and visual-spatial function and coordination."

"Usually we are talking about years of chronic low-level exposure building up and causing this problem over time," Hu said. "Lead does accumulate in the body, which actually explains how we uncovered these problems because the principal place where it accumulates is the skeleton."

"It might be just that every time lead goes into your brain, it does a little bit of damage, then it leaves and goes into bone," Hu said. "And that continues, that process continues, over years, and then what do you have left? You have a damaged brain."

Hu said that because of the threat exposure lead causes even in low-level doses, "anybody that has concern because they live in an old house, or they have a job that might involve exposure to lead, like a construction worker polishing old houses, I think that its reasonable to ask their primary-care physician, 'can I have a blood level test?"

Getting the Lead Out

The best way to find out if you have lead in your home, for a little out-of-pocket expense, is to have an inspector come out and conduct a series of tests on the air, paint, pipes and soil. Rick Eades, president of the Mississippi Association of Home Inspectors, performs tests all over central Mississippi and said that it is important for people to get their homes tested before performing any renovation, and if they hire contractors, to be sure that they are lead-certified.

"It's a community issue," Eades said, explaining that lead released into the air, water and soil systems can spread about the nearby area, potentially affecting other residents for up to a mile away.

Eades talked about a house he inspected years ago in a small town outside of Jackson, which was owned by a young couple and their 3-year-old daughter. He said the husband had stripped the paint off the outside of the house, years before his daughter was born, and that tiny, dime-sized paint chips could still be found around the yard.

"That dime becomes dust," Eades explained. "The wife, while she is pregnant, is walking around the yard and everywhere else, traipsing in dust on her feet. Her husband has it on his clothes from cutting the grass and so forth."

"So there is always a strong possibility that she ingests the dust. She will not even see the dust. So then sooner or later when they do a lead test, this kid has high levels of lead," he said.

The dust cloud from sanding or grinding the paint can travel "great distances," Eades said, "and so while he was grinding his house, he was dusting the neighborhood."

Eades has also performed lead testing of the water in homes, including inspections of the piping for lead solder. The protocol for that test is similar to the technique that the City of Jackson has been encouraging: to test the water, run the tap, then test again.

"You want to establish if it is in the flow or if it is in your own immediate pipes," Eades said. "You may have brand-new pipes in your crawlspace, as an example, which a lot of older homes have crawlspaces, but they only did what I call the laterals, the pipes they can see in the crawlspace. They haven't done anything to what we call the risers, the ones that go up to the sinks and the showers."

"This is because people don't want to spend a fortune, and they do the cheapest way possible," Eades said.

Eades said that in some cases he would run the water, and there would be a reddish color, indicating that the pipe was exposed at some point. A test of that water might then, he said, indicate that there is lead present.