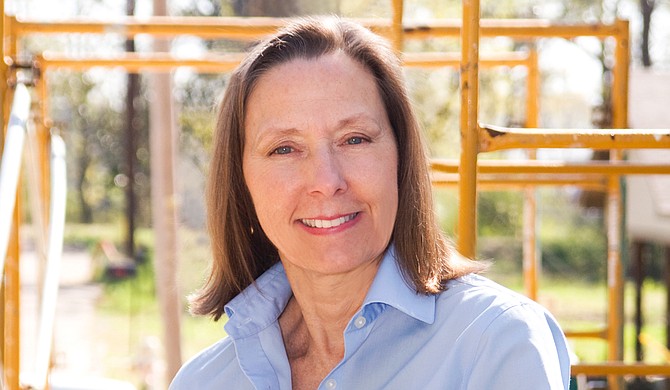 For the past 14 years, Cindy Griffin has been a driving force for Habitat for Humanity Mississippi Capital Area, and for the past 11 of those, she has served as the executive director, working to enact the wishes of the board in everything from day-to-day operations and construction to finances. However, unlike higher-ups at many companies, Griffin didn't begin her career in the organization with an interview in a shiny office building.

"I got involved with Habitat just about how everybody does—working as a volunteer," she says. "Working through (Northminster Baptist Church in Jackson), working on Habitat builds, I just became committed and impassioned about the mission of Habitat."

Perhaps the largest challenge that Griffin has faced since accepting her current position was leading the charge to restore the Mississippi Gulf Coast following Hurricane Katrina, which made landfall in summer 2005, only months after she took over as executive director of HFHMCA.

"That was a real baptism by fire, if you will," she says. "Jackson was really the only functioning affiliate between here and the coast, and you may be aware of the incredible level of devastation we had. We had a big job ahead of us in rebuilding the Gulf Coast, and then also, we had a huge influx of evacuee families who then realized there was no home to go back to."

Griffin says she and the organization decided on a "triple-mission push": HFHMCA would help with the coastal relief effort, help evacuees moving into the Jackson area, and continue serving those who were in need before the storm.

"Our mantra was (that) we wanted to multiply what we do, not redirect it," she says.

One of the difficulties that comes with Griffin's position is simultaneously seeing the need and knowing Habitat for Humanity's limitations. As the Christian organization's saying goes, Habitat is about giving families in need a "hand up," not a handout, providing those in need with an opportunity to step out and stay out of poverty. But as the executive director, Griffin has to oversee budgets and control costs, which she says might not sound in sync with the organization's altruistic goal.

"The way I reconcile that is if we're not good stewards with the resources we've been given, then that's going to greatly limit the number of families we can serve," she says. "So if we're a healthy organization that is effectively managing its resources, then we're going to be able to help more families even better."

In order to help determine the best way to divvy those resources, Habitat for Humanity has three criteria for a family to apply for assistance. Griffin says the organization describes the criteria as "need of housing, ability to pay and willingness to partner."

"Need of housing" refers to the family's current state of living, which requires a home visit to evaluate the level of need. Just as it sounds, the second criterion refers to the applying family's ability to pay for the Habitat home's 0 percent interest affordable mortgage. The family is also required to make a $500 down payment.

The final requirement, "willingness to partner," refers to what the organization calls "sweat equity." Applicant families are required to spend 250 hours per head of the household on a worksite, helping to prepare homes for other applicants while they work toward their own. Families who have completed more sweat equity hours get to choose the neighborhood they'll live in first.

Griffin says Habitat for Humanity isn't just about placing families in affordable homes, though. The organization also wants to prepare them for home ownership with free classes such as a "do it yourself" class on rudimentary home maintenance and a mandatory certified homebuyer's education class. Habitat also offers a seven-week "Financial Peace University" class from Dave Ramsey, which requires a $100 fee for the course materials.

"There's a lot of educational training that goes into preparing them for home ownership because the families that come to us have generationally been renters, so we're trying to give them the tools to be successful homeowners," Griffin says.

On Sept. 16, the organization kicked off its latest major endeavor, which will tackle Jackson's Greenview Drive area. The first phase of the project will place 20 new homes in that neighborhood by 2017. Based on numbers from the Englewood and Parkview projects, which generate $1.70 for every dollar contributed to Habitat, Griffin says Jacksonians can expect a similar outcome from Greenview.

"We know the work we'll do in Greenview will approximate about a $5 million economic impact and about 50 full-time equivalent jobs," she says. "This is a street that's got about 69 lots, and about 48 of them are derelict and abandoned, so it's just a huge impact to take abandoned properties, clear them out and put decent, affordable homes filled with homeowners in them."

Born and raised in Baton Rouge, La., Griffin has lived in Madison, Miss., for more than 30 years. She graduated from Louisiana State University with a bachelor's degree in business administration in 1975, and received her master's degree in business administration from Millsaps College in 1978. Through Northminster Baptist Church, Griffin also received an education for ministry certificate at the University of the South in Sewanee, Tenn., in the mid-1990s.

In her spare time, Griffin loves golfing, working in her yard and working out. She and her husband, Dennis Griffin, who is the CFO of Southern Farm Bureau Casualty Insurance Company, have a son, Brian Griffin, who lives in Washington, D.C., with his wife, Tiffany Griffin.