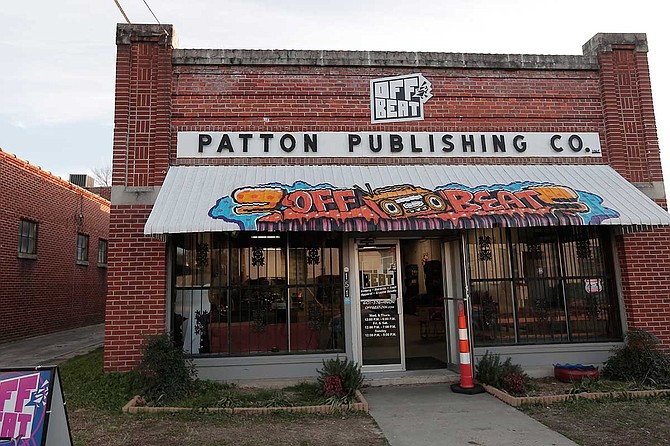 Instead of centering my New Year’s resolution on things that just benefit me, I decided to focus on shopping and eating locally as often as possible to help bolster the Jackson businesses I want to support, such as Offbeat in midtown. Photo by Imani Khayyam.

The other day at church, our pastor brought up the idea of New Year's resolutions.

Then, he asked everyone in the congregation to swap theirs with a seat buddy or two, and strangely enough, that might be the loudest I've ever heard that sanctuary get. And I'm the sound guy, so you know good and well that I've played some heavy music on that sound system before. I mean, you know, just for testing purposes, of course.

People seemed genuinely enthused about their goals or maybe a touch embarrassed, in some cases, judging by the smattering of nervous laughter, and the room was filled with smiling faces and cheerful chatter. But that moment acted as a friendly—but again, pretty darn loud—reminder for me that I hadn't come up with a resolution.

I don't know if it is just that part of my brain is being obstinate like, "Nope, it's 2018 until I say otherwise," but the idea that 2019 is already well upon us has yet to click with me. My wife and I even attended a New Year's Eve party, watched Carson Daly somehow still be on TV, and puzzled at Jennifer Lopez dancing in an oversized men's suit shirt for some reason. If that doesn't scream "Happy New Year," then I don't know what does.

But there I was on a Sunday morning, almost a week into 2019, thinking, "Huh. I guess I should come up with a resolution." Luckily for me, the Internet is a thing, so that afternoon, I was able to get a few ideas on where to start from every last-minute idea man's best friend, Google.

In one article I found from small-business and startup magazine Inc., writer Peter Economy—that is his actual name; I checked—says that about 60 percent of people make resolutions each year, but only about 8 percent of those are successful. Worse still, more than half of the 2,000 people surveyed said they failed their past resolutions before Jan. 31 of that year.

That in itself may not be too surprising, but what I did find a little strange is that, when you look at the list of the top resolutions for 2019, almost all of them were focused entirely on self.

The top three categories centered on personal fitness goals, with more than half of those surveyed saying that they wanted to diet or eat healthier, exercise more and lose weight, among other resolutions.  Underneath that, you had financial and career categories, including saving more money and finding a new job; betterment categories like learning a new skill or hobby, and reading more; and what I might call the "kicking your vices" categories, with many people looking to drink less alcohol and stop smoking.

All of these are good things, of course, and I understand that most people see a New Year's resolution as an opportunity for self-improvement, with an emphasis on "self." In fact, I would throw myself in with the folks who want to exercise more and lose weight.

At the same time, I will admit that I was a little disheartened reading Inc.'s article. The only really positive external resolution was in 10th place, the bottom of the list: "spend more time with family and friends." Again, that is a great goal, but with that at only 13 percent, it just made me wonder what fell short of the top 10.

In 2019, I'm going to exercise more, I'm going to lose weight, and I'm going to just generally try to be adapt a more active lifestyle, as tough as that can be with a full-time desk job. But while I'm committed to those goals, I decided that I want those to be a given, not my resolutions.   For many people, a new year is a time for personal reflection, so since I was late to the resolution game anyway, I took a moment to think about what I could be doing better to help my community.

Especially during the nonsensical busyness of the holidays, I will fully admit that I went the easy route on too many  occasions. For one, I went to a nearby chain store to pick up gifts instead of traveling just 10 minutes further to shop locally. I also grabbed coffee at a Starbucks just because it was attached to that store, when I could have waited half an hour and gotten a much, much tastier beverage since I was heading toward Jackson anyway. And God help me, I shopped on Amazon.

Feel free to judge me. I'm judging myself. It's incredibly stupid that I couldn't be bothered to drive a little further or to pay maybe a dollar more if that so I could support businesses that I love and am rooting for. Instead of spending money locally, where it can stay in the Jackson metro area and do much more for our community, I got lazy.

I know that some people will be reading this and saying, "So what? Most people do that." But that's where the resolution aspect of this all comes in. Most people fail their resolutions, too—92 percent, remember? Most people make up their minds to do something every year and can't get around to it. I don't want to be most people.

If a new year is an opportunity to be better, then I want to get better about what I'm bettering. Instead of just checking the box of, "Yeah, I'll exercise more in 2019," I'm setting that as the base level. My higher ambition will be to support Jackson businesses at every chance I get, not just come next holiday season but throughout the year.

Like I said, I know I'm late to the resolutions game, but maybe a few people will join me in this. I think resolutions will start meaning a whole lot more when we all choose things that make a difference for more than ourselves.