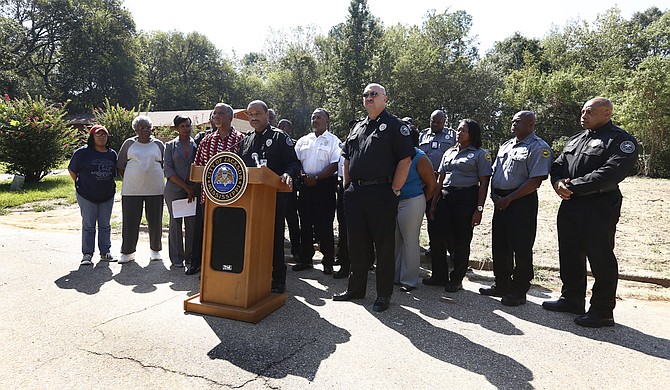 Lee Vance, the JPD chief of police, touted the City's 100th demolition of a dilapidated property. Photo by Imani Khayyam.

Katie Brown, a 35-year resident of Jackson's Queens neighborhood, said the neighboring house at 5157 Queen Mary Lane was beautiful when she first moved in. However, for the past 10 years, Brown says she had been asking the City of Jackson to do something about the overgrown and abandoned property.

Neither drug-dealers nor homeless people occupied the building, Brown says, but it was such an eyesore that when the home was featured on a TV news broadcast before the City tore it down in August, she didn’t even recognize it.

“I said, ‘Oh my God, that’s it?’ You couldn’t even tell it was a house,” she told the Jackson Free Press.

Jackson police Chief Lee Vance and department officials said the home represents a milestone in the city's fight against blight. On Sept. 17, the city's Community Improvement Unit, which Mayor Tony Yarber placed under the supervision of the Jackson Police Department last year, announced that 107 properties have been demolished under the revamped division.

Starting last year, the City revamped the way it handles complaints against rundown houses and unkempt properties. Under that new system, contractors wanting to receive work to clean up the properties must receive pre-approval. City officials said the change cut down on unqualified firms getting contracts from it.

The State of Mississippi currently owns the Queen Mary Lane property, which Jackson paid $7,000 to demolish.

Vance said many owners of the non-State-owned properties demolished their own properties, saving the city $411,000. In addition, the use of inmate labor saved the city another $363,000 in labor costs, information from JPD shows. Vance said the department’s operations will continue to accelerate, working through a lengthy list of candidate properties to be demolished.

“How do you eat the elephant? One bite at a time,” Vance said. “Mayor Yarber made it very clear that this was high on his priority list.”

Some Queens neighborhood residents attended the chief’s press conference. Vance said it’s been established that abandoned properties are a breeding ground for crime and places that attract drug-addicted people, prostitution and homeless people.

“Getting the properties down or renovated and occupied are the only two solutions that I know to that,” Vance said.