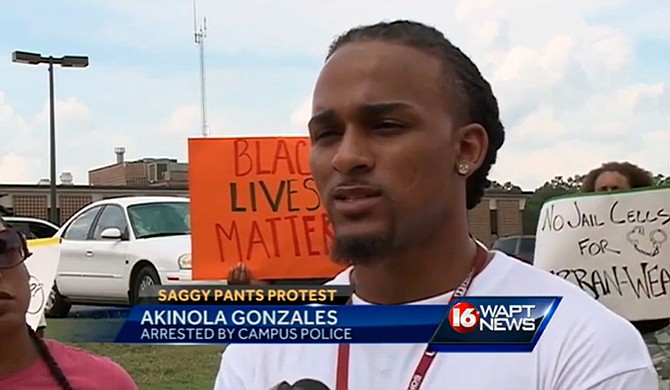 A Hinds Community College committee said Akinola Gonzalez, 21, would not face a disciplinary hearing stemming from his Sept. 1 arrest, which campus police initiated for a dress code violation of sagging. However, Gonzalez, could still face criminal charges for refusing to surrender his school ID. Photo courtesy WAPT

That day, Akinola Gonzalez was outside his school's cafeteria when a campus police officer confronted him. The officer told Gonzalez he was in violation of the school dress code's prohibition against wearing sagging pants. Gonzalez, a 21-year-old engineering major at Hinds, said he would pull up his pants, a police report of the incident shows.

The confrontation did not end there.

Officers asked Gonzalez to sit down and gave other commands with which officers said he did not comply. Officers then placed Gonzalez under arrest for "Disorderly Conduct: Failure to Comply." He was detained overnight for 22 hours at the Raymond Detention Center.

Hinds Community College officials were not immediately available for comment this morning. Several attempts over the years, including a 2012 proposal from then-District 5 Supervisor Kenneth Stokes, to ban and assess fees for sagging in Jackson have failed.

"Although Akinola was not suspended or expelled, we still see this as outrageous— that a student minding his own business was stopped on campus and found guilty of anything at all. And we certainly find it outrageous—that a student walking to his dorm room ends up in JAIL," Cooper wrote.

On the afternoon of Sept. 9, the Hinds Community College disciplinary board ruled that Gonzalez did not violate the school's dress-code policy, and they have decided to not take any disciplinary action against him. Protesters gathered on Wednesday to defend Gonzalez and other students who have been arrested for sagging pants.

However, he still faces charges from the campus police department for failing to comply with their orders.

Tyrone Jackson, the dean of students at Hinds Community College, told WAPT Wednesday that students would not be arrested based on dress-code violations. Jackson disagreed with the protesters who claimed that the incident was profiling because African American officers were involved in the arrest.

Cooper also wrote: "The fact that Hinds Campus is feeding young Black people into a penal system is a REAL problem. It is an issue that cannot and will not be dismissed."