Provine: Academics, Behavior ‘Go Up Together’ 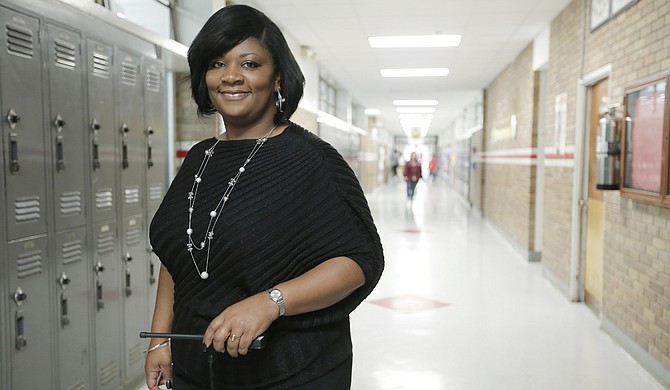 Principal Laketia Marshall-Thomas believes that good behavior at Provine High School is about getting creative. The school's mascot, the Rams, is also an acronym that represents school-wide expectations in Responsibility, Achievement, Motivation and Safety. RAMS expectations are posted throughout the school with specific rules depending on location.

In the hallway, for example, the Responsibility rules for students include: "Walk in an orderly manner on right side of hall" and "Keep noise level to a minimum."

Behavioral expectations are posted all over the school and explain rules for every area of Provine in the classroom, hallway, bus, cafeteria and even bathroom.

RAMS is Provine's implementation of the positive behavior interventions and supports, or PBIS, a district-wide behavioral framework used to track student behavior in JPS schools and in districts nationally.

Following the broadcast of several disturbing videos—one showed a student pushing a teacher down stairs—in JPS high schools, the school district held a press conference on Monday, Nov. 16, to address the public concern for safety and discipline in local high schools.

Dr. Freddrick Murray, the chief academic officer of high schools, said then that scenes portrayed in videos were the exception and not the rule in JPS schools. PBIS is not about punishment, Murray said.

"Discipline is about teaching, not about punishment, so that's the approach that we take with PBIS," Murray told the Jackson Free Press.

Marshall-Thomas said she attributes Provine's lowered number of discipline issues, since she started as principal in 2010, to PBIS. The RAMS system includes incentives for students to behave appropriately. Each Provine student has a RAM card with 10 hole punches. The game is simple: Don't get 10 punches, and you qualify for school assemblies and events with free snacks. Students who fill their cards must sit in a classroom during assembly time and listen to a lesson on behavior instead—every nine weeks, students get new cards and a chance to start over.

"We always try to do something to reward students who are meeting expectations," Marshall-Thomas said.

Students receive punches for disturbances that continue after they have been warned once. Marshall-Thomas said the staff do not administer punches frivolously, but at the same time, teachers have the power to punch cards themselves, giving them more control over their classroom environment.

A PBIS team made up of school administrators, teachers and students meet twice a month to evaluate discipline data and see what locations and times have the most disturbances.

When classrooms were rowdy after lunchtime, Provine transitioned to quiet lunches, where students could talk to neighbors but not yell across the room.

In their latest evaluations, the PBIS team found that morning transition times were rowdy, especially in the hallway. Now teachers stand in the hallways, students walk to the right side of the hallway, and if necessary, teachers do lock-outs, where they lock doors as soon as class starts. Students who are late must go to detention.

"We have PBIS lessons we teach at the beginning of the school year—we did them every day for about two weeks where we taught expected behaviors," Marshall-Thomas said. "We actually had a lesson where we demonstrated how you walk to the cafeteria and walk to the buses."

Research shows that making expectations clear can help eliminate problems or confusion, and it's working at Provine. In her five years as principal, Marshall-Thomas has seen her graduation rate go up significantly—it was 51 percent when she came on board in 2010; by 2014, 65.6 percent, Mississippi Department of Education data show.   "Academics and behavior go up together. If you have fewer interruptions during lessons, there are fewer stops in the lesson; then more material can be covered," Marshall-Thomas said.

"It's about changing the culture."

Training for PBIS is ongoing, as well as crisis-prevention intervention trainings for teachers in the district. JPS also implemented its own restraint-and-seclusion policy in February that details specific protocols for when and how it is appropriate for teachers to use restraint or seclusion on students.

Dr. Margrit Wallace, the executive director of student academic and behavioral support at JPS, said PBIS is an overall framework for JPS to follow, but how schools implement the three-tiered system is up to the school administrators. The tiers represent student levels of behavior—tier one being a student displaying positive behavior and tier three a student "in crisis," Wallace said.

"We do universal screening of behavior for characteristics of being 'at risk' and having difficulty with problem solving, conflict resolution, social and emotional skills, and then we provide support," Wallace said.

Teachers also track student behavior ratings. Tier two and three students must have either a behavior contract or a plan to help them fix and correct habitual behavioral infractions. Marshall-Thomas said about 2 percent of her students have behavioral plans requiring them to meet with a school counselor every week. About 5 percent of Provine students have a behavioral contract.   Teachers evaluate tier 2 and 3 students at bi-monthly meetings, and when students improve over time, the contract is lifted.

"It's about incentives, expectations, and procedures and routines," Marshall-Thomas said. "Those things will make the biggest difference in your school."