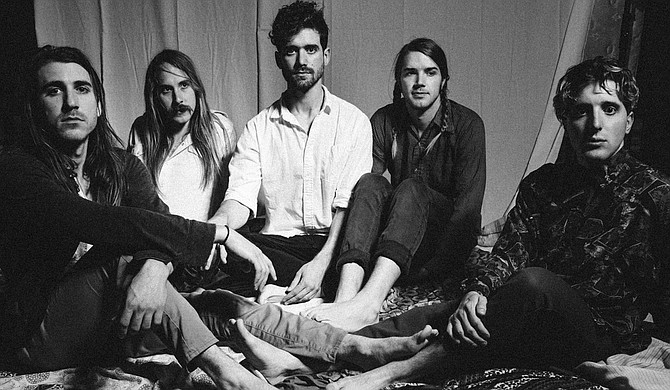 When Nashville, Tenn.-based band The JAG independently released its sophomore album, "Pondermental Wonderment in Hypocricity," on Oct. 23, the band created quite a stir among fans, many of whom were curious as to what exactly the album was about. The eight-song record's title alone attracts attention, but for the quintet of psychedelic rockers, it's not just about standing out from the crowd. It's also about being their true selves and delivering a message.

"The album is not about anything specifically; it's about different things," bassist Gant O'Brien says. "We aren't big fans of the industry here (in Nashville), and we decided to make that known through the attitude of the album."

Although the band members currently live in Nashville, four of the five musicians—O'Brien, singer-guitarist Aaron Tyler King, lead guitarist Joe Regan and percussionist Nick Vallas—grew up here in Jackson. Early '90s shoegaze music inspired them to write their own songs.

"I grew up listening to Nick Cave, Leonard Cohen and others. Those are not necessarily artists, but they're great songwriters, for sure," King says.

O'Brien says both he and King began playing instruments at age 12, and they were fortunate to decide at an early age that music would be their career.

"We've been listening to music all of our lives, and eventually, you decide if that's what you want to do," he says.

King, Regan and O'Brien began playing music together in the early 2000s before deciding to move to Nashville to pursue their music full-time in 2011. Drummer Scott Harper a short time later, and Vallas joined in 2014. The musicians performed together as The JAG for the first time when Nashville pop-rock group The Gills invited them to join the bill at a house party in Antioch, Tenn. One of the biggest moments for the band came in the form of a 2012 tour with popular rock act Grace Potter and The Nocturnals.

"She kind of helped us get a foothold in Nashville," O'Brien says of Potter.

Producer Andrija Tokic, who owns Nashville recording studio The Bomb Shelter and is best known for his work on the Alabama Shakes' "Boys & Girls," was also a catalyst for The JAG's success in the city thus far. O'Brien credits Tokic for helping elevate the band's stature by producing "Pondermental Wonderment in Hypocricity."

The members of The JAG say they operate on a broad musical spectrum musically, ranging from '60s psychedelic rock to early '80s funk. King says they derive a lot of that approach to songwriting from the bands that they grew up listening to and whatever current favorites they come across.

"We love a variety of sounds," he says. "That, in itself, is a lot of influence for us."

O'Brien and King say they occasionally find themselves with limited resources due to the financial strains that come with pursuing music as a career, but they understand that this part of the process. When the opportunity presents itself, The JAG will be ready to bring its music heard across the world.

"We would like to teach people something," King says. "It would be great for our music to be heard worldwide. We want people to not just receive us but, essentially, learn and gain something from us. If not learn, at least we want them to experience it. Our music is an experience."

The JAG performs at 9 p.m., Wednesday, Nov. 25, at Duling Hall (622 Duling Ave., 601-292-7121). Admission is $10 at the door or $7 in advance at ardenland.net. "Pondermental Wonderment in Hypocricity" is available on iTunes, Soundcloud and Spotify. For more information, visit jagjagjag.com.