Artistic director David Keary will appear at the event to discuss the narrative of Ballet Mississippi's upcoming production of "Coppelia," and costume designer Gerry McElroy will talk about the costumes used in the performance.

Mary Schiele Scanlon, president of event sponsor Friends of the USA IBC, is one of the organizers for the event. 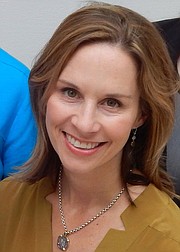 "We are trying to bring ballet to everyone with this event," Scanlon said. "This first event will feature Ballet Mississippi's upcoming spring performance of the classical comedy 'Coppelia,' and we hope to feature more in the future, including 'Cinderella,' 'Giselle' and other traditional ballets. Most of these have been featured in USA IBC competitions for years."

Scanlon, 47, was born in Greenville, Miss., and grew up in Belzoni, Miss. She started dancing at age 4 and has studied everything from ballet and tap dancing to ballroom dancing throughout her life. She went to high school at Humphrey's Academy in Belzoni and later attended the University of Mississippi, where she graduated with a bachelor's degree in French in 1990.  She taught English in Dunkirk, France, for a semester after college and married her husband, Pat Scanlon, after returning to Mississippi and settling in Jackson in 1991. Mary and Pat, who have been married for 22 years, were friends at University of Mississippi and became reacquainted while Pat attended the University of Mississippi Medical Center School of Medicine in Jackson. The couple has two sons, Patrick, 19, and Duncan, 15.

"We're hoping that Ballet BackStory will both give the public a chance to learn about the techniques and various schools of ballet, as well as help expand membership and recognition for the USA IBC," Scanlon said. "Understanding classical ballet makes a big difference. We want people to be able to appreciate the expressions, the emotions that go into a performance. The USA IBC does a lot to enhance the understanding and enjoyment of this art form."

Friends of the USA IBC is seeking volunteers for its annual Moonlight Attitude fundraiser in Jackson, as well as the local public school ballet program CityDance and preparations for the next USA IBC competition. Anyone interested in volunteering can email Scanlon at [email protected] or call Friends of the USA IBC at 601-355-9853.