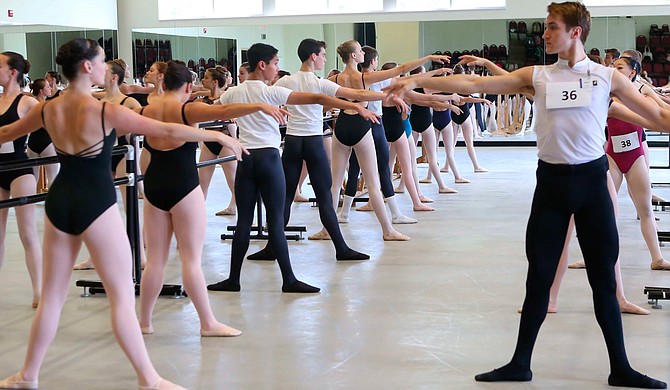 This year, Belhaven University is playing a part in the USA International Ballet Competition by hosting the USA IBC Dance School, which runs simultaneously with the competition. Photo by David Sprayberry

The latest installment of USA International Ballet Competition, which comes to Jackson's Thalia Mara Hall once every four years, began June 10 and runs through June 23. This year, Belhaven University is playing a part in the event by hosting the USA IBC Dance School, which runs simultaneously with the competition.

Ballet students from around the world will take dance classes in the Bitsy Irby Visual Arts and Dance Center studios, while living in Belhaven University residence halls during their stay. Five Belhaven alumni and six students will assist with the dance classes.

Additionally, Ravenna Tucker Wagnon, associate professor of dance at Belhaven, will serve as an evaluator during the competition itself, and will offer competitors feedback after their performances.

For more information about the competition, visit usaibc.com. Learn more about the IBC Dance School at usaibc.com/dance-school.

The Mississippi Heritage Trust, a nonprofit working to preserve historic sites in the state, presented Jackson State University with one of its 43 Heritage Awards for Excellence in African American Preservation during a ceremony in Ocean Springs on June 7. JSU received the award for its work in restoring the Mt. Olive Cemetery in Jackson in 2017.

Mt. Olive Cemetery opened on the grounds of a former plantation in the early 1800s and is among the oldest private cemeteries for African Americans in Mississippi. The cemetery has 268 identifiable graves and more than 1,000 unidentifiable burial sites. The National Park Service added Mt. Olive Cemetery to the National Register of Historic Places in June 2017.

JSU's efforts to restore the cemetery included refurbishing two statues at the site depicting Ida Revels Redmond and James "Jim" Hill. Redmond was the daughter of Hiram Revels, the first African-American to serve in the U.S. Congress in 1870, who organized voter registration drives and youth social services in Jackson. Hill, for whom Jim Hill High School is named, was a former slave who served as Mississippi's Secretary of State from 1874 to 1878.

JSU also recently applied for a $500,000 grant from the National Park Service to restore most of the mausoleums and headstones in the cemetery.

The Institute for Disability Studies at the University of Southern Mississippi is partnering with Mississippi Gulf Coast Community College's Estuarine Education Center to host a free program called "Adventure Therapy."

The program will aim to help people, both with and without disabilities, develop teamwork, communication, trust and self-empowerment skills through activities such as tightrope walking, zip lining, kayaking on the Mary Walker Bayou and indoor rock-wall climbing.

Remaining dates for the 2018 Adventure Therapy program are Aug. 10, Aug. 24 and Sept. 14. Individuals and groups can also schedule additional dates to better accommodate their scheduling needs. Participants must be age 12 or older to try the rope courses.