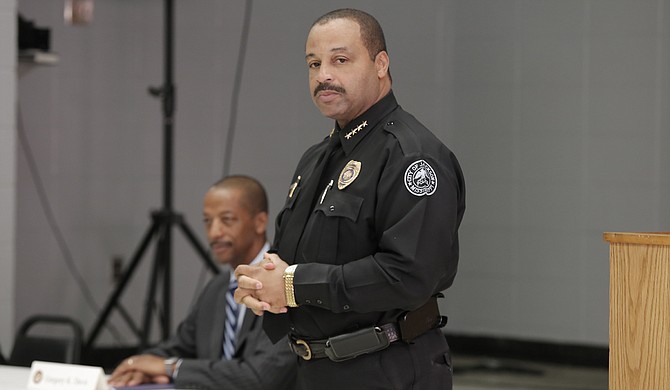 The brass at the Jackson Police Department are crowing about ending 2015 with crime in a continued free fall and some new technology helping officers solving crime.

Since the summer, JPD has "aggressively" used the National Integrated Ballistic Information Network, a national database of digital images of spent bullets and cartridge cases found at crime scenes and test-fired from seized weapons

The Bureau of Alcohol, Tobacco, Firearms, and Explosives manages the program and provides the equipment for crime labs around the country; it's free for JPD.

Chief Lee Vance explained to the Jackson Free Press that officers would sometimes respond to shots-fired calls but if there was not a victim, they had little to investigate. Now, he said, officers can collect shell casings, run them through NIBIN and if there's a violent crime involving a gun, police can compare shell casings from the crime to the information in the database.

"A NIBIN hit report has many potential tactical and strategic uses for law enforcement. Law enforcement investigators can use it to link crimes, which can help to identify suspects. They can also use it to understand patterns of gun crime, such as gun sharing and trafficking," a 2013 report from the National Institute of Justice states.

Vance and other JPD brass said the combination of NIBIN and increased patrols in northwest Jackson are responsible for a reduction of violent crimes compared to the same period last year. In all, violent crimes saw a 3.1-percent reduction for the period ending Dec. 13. Vance believes the stats address a popular misconception that JPD is indifferent to crime in the capital city. "People ask what we're doing about crime," Vance said. "We're catching bad guys."

Forget it, Jake. It's Jacktown.

Although no guns were used in the commission of the crimes, JPD was also integral to the arrests of two men charged with embezzlement for water theft. Mayor Tony Yarber said the public-works employees were arrested Dec. 15.

In both cases, City officials say the men, who worked in the field as water-meter installers, are accused of stealing water at their private residences. On Dec. 18, the City announced five more people were terminated; officials have said that up to 30 people in all could be fired before the investigation ends.

Yarber was alluding to the fact that public-works officials have received complaints from elderly residents that water shut-off workers attempted to "hustle" homeowners into paying them "to hook them up," as Vance put it. Loss of water has been a nagging problem for Jackson. In addition to losing as much as 40 percent of its treated water to leaky and failing pipes, ways around paying a City water bill are an open secret. In February, Raftelis Financial Consultants, a firm the City hired to audit its water revenue, found after a review that the potential for fraud exists at the water-billing department in a number of ways.

These included field tampering, falsified meter reads and disconnected bribes, as well as payments made at the water-billing department that were not deposited into the bank. Subsequently, the Jackson City Council hired retired officials from the Internal Revenue Service and Federal Bureau of Investigation to probe the water-collections department. Ward 4 Councilman De'Keither Stamps said last week that the probe is ongoing and looks at deeper systemic issues in the water department.

"I don't want anyone to think we arrest two people and think the water-revenue issues are solved," Stamps said. "This is just the tip of the iceberg."