Faiths Join Together Against Violence 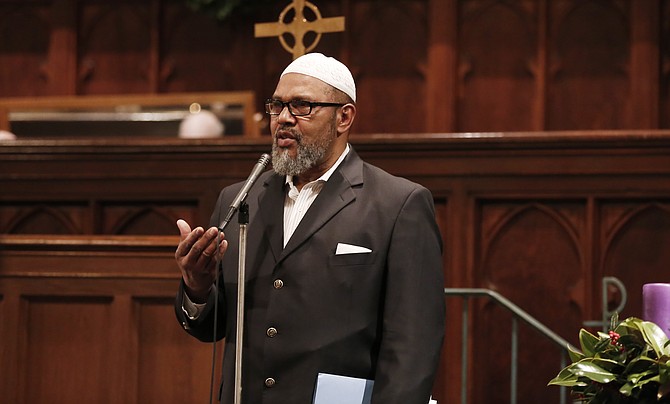 The chapel of Fondren Presbyterian Church swelled with the voices of people from several Jackson-area faith communities—Muslim, Jewish and Christian—who came together to respond to the international terrorist attacks in Paris, Lebanon and Turkey as well as recent national mass shootings.

Hanukah began the night of the service, and Rabbi Stephen Wylen from the Beth Israel Congregation led the audience in a Jewish peace song with three words "Hevenu Shalom Aleichem" which means "We brought peace upon you."

Leaders from the Muslim community condemned the terrorist attacks abroad and the shooting in San Bernardino that left 14 people dead on Nov. 2. Fatih Ozcan, a Muslim regional representative from the Dialogue Institute of Mississippi told the audience, "No terrorist can be a Muslim, and no true Muslim can be a terrorist."

Imam Ameen Abdur Rashied, who leads the Masjid Muhammad in Jackson, said that the spirit and faith within believers, regardless of what faith tradition they come from, unites them all against those in the world who would have people turn against one another and hate each other.

Rev. Justin McCreary, the pastor at the Unitarian Universalist Church of Jackson, invoked a Christian song he learned as a child to understand where we all came from. The song, "Father Abraham," is about all of humanity, McCreary said.

"We are the children of Abraham and Sarah—that is where we came from," he said.

Rabbi Matt Dreffin, Mississippi Religious Leadership Conference secretary, said the organization recognizes humanity in all human beings and has no qualms about getting involved in political issues when they become moral issues. Saving people's lives is one of those moral issues that MRLC feels strongly about.

"We have an obligation to speak out against or for (people), depending on what the particular situation is," Dreffin said.

MRLC condemns the recent shootings and attacks in Paris and more recently in Colorado Springs, Colo., and San Bernardino, Calif. The "peace service" was a way for those who practice different faith traditions to stand together.

Dreffin said that, in his personal experience, the way others understand him as a practicing Jew is sometimes limited, and that understanding all voices—even those in the minority—is crucial for working toward making our community and world a better place.

"If we allow only one voice to dominate the conversation or one set of voices—even if they makes up 99 percent of the conversation—damage can be done without learning," he said.

On Nov. 2, a married couple, identified as practicing Muslims, opened fire on an office holiday party in San Bernardino, killing 14 people and injuring 21, in the most deadly U.S. shooting since a white 20-year old male killed 20 students and six teachers in Newtown, Conn., in 2013.

Okolo Rashid, the executive director of the International Museum of Muslim cultures in Jackson and a practicing Muslim, said the differences between "Muslim" and "Islam" are not discussed when a Muslim is responsible for a crime. Rashid said the media helps perpetrate the idea that Muslims are associated with terrorism in the U.S.

"If a Muslim does something, it's at the top of the news," Rashid said. "And the whole story is 'this Muslim did this or that,' and it's attributed to the Muslim culture."

Rashid said that identifying a shooter as "Muslim" is the "wrong approach and wrong language" and is not used in discussions of other shooters—like Robert Dear, who is accused of killing three people at a Planned Parenthood clinic in Colorado Springs.

"Muslims in this country and in their own countries are more influenced by culture than the dictates of the religion, so to use the religion as a foundation of the problem is problematic," Rashid said.

There have been four mass shootings this year according to a Mother Jones database that defines a mass shooting as the FBI does, when four or more people are killed in a single incident and location. The shooting in San Bernardino was the deadliest this year.

According to Islam, the victims of these attacks are received by God as martyrs, Rashid said. She sees these mass shootings as products of social, economic and cultural circumstances; the culture informs the religious beliefs, Rashid said, and Islam—which does not condone murder in the first place—is not to be blamed for terrorism. Islamaphobia, Rashid said, is bred through fear and sometimes anger—not understanding.

Rims Barber, a parish associate at Fondren Presbyterian Church and director of Mississippi Human Services Agenda, said his faith calls him to love other people without regard to almost anything. Barber believes that the religious communities can offer hope to those who are distraught or fearful.

"There are too many people out there that are preying on our fears and use it for political points," Barber said. "I think we have to have a place in our society that's open for people who are free to disagree and free to live lives that make sense to them."

Barber said bringing different religious groups together is important to make life better for the world and the next generation. Rashid agreed.

"It's important for the religious faith community to stand against those kinds of things and cultivate a culture of getting to know one another, love one another and wanting the best for one another," Rashid said.