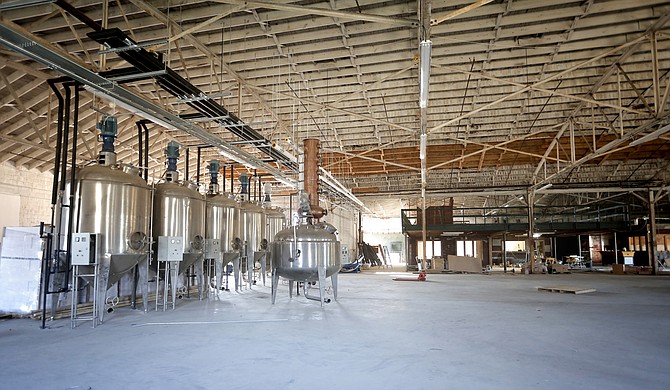 Cathead Distillery will host a grand opening for its new downtown location on Dec. 12. Photo by Imani Khayyam.

On a day in the middle of November, a lot of commotion is happening in a warehouse space off South Farish Street behind the Jackson Convention Complex and Mississippi Museum of Art. Worker crews dig up dirt in small concrete areas of the space's parking lot, preparing to plant patches of grass. Some workers unload materials such as lumber from the back of trucks and carry them into the vast warehouse space.

At one point, a worker jackhammers a spot near the building's front entrance, making it hard to hear much of anything else. Just inside sits the framework for offices and a lab. Three tall cylindrical stills, one with a large copper pipe, are near the back of the space and sit in from of an empty room that will eventually house whiskey barrels.

Cathead Distillery, Mississippi's oldest distillery, is in the process of moving to downtown Jackson from its space in Gluckstadt after five and half years of business.

Owners Richard Patrick Jr., who is from Alpharetta, Ga., and Austin Evans, a Jackson native, met and became good friends while studying small business at the University of Alabama. After Evans graduated in 2004 with a bachelor's degree in small business, he moved to Charleston, S.C., and convinced Patrick to do the same after he graduated with the same degree in 2005. There, they both worked in the alcohol and beverage industry, with Evans working on the restaurant and bar side as a server and Patrick working as a marketing representative for a business that imported wine, beer and Scotch from all over the world. They worked in South Carolina for about 11 years before moving back to Jackson to start Cathead.

Patrick says that in college, they knew they wanted to own a business together, though at that time, they didn't know it would be a distillery. For them, owning a small business made sense because both of their parents owned small businesses—Evans' father, John, owns Lemuria Books in Jackson, and Patrick's father, Richard Patrick Sr., owns a machine fabrication business.

Evans says that the alcohol and beverage industry struck him as a fun, fast-paced industry, and once he started learning more about it, it continued to pique his interest.

In May 2010, Cathead Distillery went to market as the first distillery in Mississippi.

"At the time we started a distillery in Mississippi, it was one of the last states in the country that didn't have a distillery, so we thought that was kind a unique point of difference," Patrick says. "We wanted to basically create a value add for the state in a sense that (a distillery) was something that was missing."

The name derives from the phrase, "That cat can play," meaning that a blues musician was respected by his peers in the blues and folk-art community. Blues musician and artist, James "Son Ford" Thomas, was known for sculpting "Cat-heads" featuring other blues artists. Patrick and Evans used the name to pay homage to Mississippi's deep blues roots.

The business' first home was in Gluckstadt near the Mississippi Alcohol Beverage Control warehouse, which houses the state's liquor before it gets distributed. "It made sense because we were right there," Patrick says.

At first, because of state law, distilleries couldn't do tastings, which meant that Cathead didn't do tours.

But a couple of years ago, Mississippi state legislators passed a bill that allows for four-ounce pours, or tastings, which is part of the reason Cathead is currently making the transition into Jackson.

"Once that bill passed, (it) validated everything moving forward for us," Evans says.

Patrick says that their location in Gluckstadt wasn't as inviting as the space in Jackson will be.

"We've outgrown (the Gluckstadt location), and we wanted something that was, I guess, more inviting to the general public, and (had) more square footage. We needed a building that could accommodate more space," Patrick says.

Having more square footage (the South Farish Street space has more than 20,000 square feet, compared to 2,000 in the old building) in the new space will allow them to produce more spirits such as whiskey.

Patrick and Evans plan to do bourbon whiskey, bourbon, rye and wheat whiskeys, and single malts.

"The ability to move into downtown Jackson and offer tours and tastings and have a storefront and have people come by and see the production aspect, it's a really neat thing, and hopefully it's really beneficial to the movement that's going on in the city," Evans says.

To make Cathead vodka, Patrick says that they start off with a mash, which is essentially a beer, and then distill it to get it to a higher proof (190 is the minimum for vodka).

Then, they filter it and add water back into it, bringing the proof down to 80. For Cathead's Bristow gin, they steep the vodka with botanicals and then blend all the distolates together. The company produces vodka in flavors such as honeysuckle and pecan, and creates Bristow gin and Hoodoo chicory liqueur.

"It's been kind of a dream since we started this business to move downtown," Evans says. "It was just looking for the right time and space to do so. Being born and raised in Jackson, my father having a small business in Jackson, it was a long-term goal to establish a footprint and establish my business' domain here in Jackson."

Cathead Distillery (422 S. Farish St.) will have a ribbon cutting Dec. 8 and host a grand opening Dec 12. For the grand opening, the cover charge is $10. Music will start at 1 p.m., and Hal & Mal's will provide food and drink. For more information, visit catheaddistillery.com or find the business on Facebook.