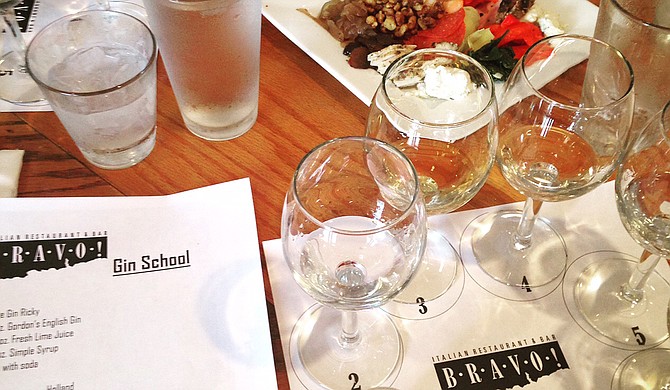 BRAVO! Italian Restaurant and Bar has expanded its wine tastings into the world of liquor, including gin. Photo courtesy Liz Lancaster

I often find myself drinking seasonally. Generally, that means more red wine and full-bodied beverages in the winter and lighter wines in the summer. Spring and summer also make me think of gin.

I'll admit that back in my law-school days when I first drank gimlets and martinis, I went the vodka route. But now that I'm a little older and wiser, I stick with a classic gin martini, also called a vesper. I'm also a fan of pink gin (made with gin and angostura bitters). And I've had enough of the liquor to know that some are more floral than others, some are stronger in gin's signature juniper note, and Hendrick's tastes of cucumber, but I'd really only ever tried a few brands.

So when I heard that Chris Robertson, assistant service manager at BRAVO! Italian Restaurant and Bar, planned to host a gin tasting at the restaurant one Saturday afternoon, I immediately emailed my man and a group of friends to see who was game.

Lately, Robertson has built on the restaurant's popular Sunday wine tastings, expanding them to the cocktail side of things as well over the past year with a Tiki cocktail tasting, a class on how to stock your home bar and a Scotch tasting, among others. In all the tastings I'd attended before, Robertson's friendly personality, fun stories and honesty about what he likes to drink complement his extensive knowledge and passion about cocktails, which makes the tastings informative and fun. He also includes recipes for drinks, so you leave with takeaways to practice. The latest was no exception.

My date and I arrived to find communal tables set up in the restaurant area, so we joined a booth where we made friends with Dennis Riecke, a gentleman who moonlights at a liquor store and, therefore, viewed the gin tasting as an educational opportunity. Cheers to that, we said. As we chatted with him, we sipped on the Gin Rickey we got as a welcome cocktail. Robertson explained it was his ode to local legend (and ladies' man) Cotton Baronich—the 85-year-old gentleman known for his years tending bar at the Sun & Sand, George Street Grocery, Hal & Mal's and the Edison Walthall Hotel.

After that, Robertson introduced the tasting with a promise to open our eyes (and tastebuds) to the wide world of gin, proclaiming, "If we (think we) know anything about gin, it's probably wrong," adding that those we would try included no bottle that cost more than $50, so everything was relatively accessible to enjoy at home.

His selection for the gin school included six samples. The first, Bol's Genever from Holland, Robertson encouraged us to take as a shot. After having tasted it, I could see why; my fellow agreed it would put hair on your chest. Robertson added that to him, it almost drinks like a white whiskey, though with a strong taste of juniper.

As he explained the process of distillation, including drawing a diagram of the process on a small whiteboard, and what makes a gin English (I'll admit, by that point, the drinks had taken some effect, and I was chatting with my table companions, so I don't really remember the distinction), we progressed to Bristow English dry gin (distilled locally in Gluckstadt in small batches) and Ransom Old Tom gin, which was actually brown, like whiskey.

We progressed to Bitter Truth pink gin from Germany, which was great to sip over ice, with lots of citrus notes and a lower alcohol content. Robertson shared the fun fact that pink gin is far from "girly"; it's actually Bond's official drink.

Next up was Uncle Val's Botanical Gin from Sonoma, Ca., which was my favorite of the day. Just smelling it is a treat; it's really crisp, but the botanical is a good nomenclature to use, as it's not overly floral, just fresh and herby with citrus notes.

It finished smooth; I didn't get any burning or harshness, and I feel like it would be good both in simple, straightforward cocktails, as well as in more complex mixed ones. In case you couldn't tell, I'll definitely be getting this one to stock the home bar.

To finish off the day—as if we needed more—the guys from Cathead Distillery (who makes Bristow gin) sent a special treat to the tasting: some of their Bristow Single Barrel Cask Strength Confession. Just smelling that one was enough for me. Like the Ransom Old Tom, this one was brown, which indicated to me to tread lightly. (I don't do well with brown liquor.) I ran into someone else from the tasting a few weeks later, and she was still talking about this one, though, so for those who like their liquor to really pack a punch, it was clearly a treat.

Robertson plans to continue these Saturday courses, so you'll have more chances soon to go learn for him and enjoy a Saturday afternoon day drink (or several). He's planning a tequila tasting July 25, with more ideas brewing for the fall. In the meantime, go visit him and the bartenders at BRAVO! and see if they'll shake or stir you something gin-tastic to try.

Pro tip: shake cocktails that contain citrus or cream; stir everything else.