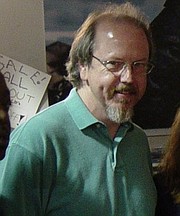 Jackson music impresario Drake Elder died the morning of Friday, Aug. 14, at his home in Brandon. In addition to managing the box office at the Mississippi Coliseum and Thalia Mara Hall, Elder, 62, was one of the founders and co-owners of Bebop Record Shop, which closed in 2011. If you've ever bought a concert ticket or vinyl in the Jackson area within the last 40 years, there's a good chance Elder had a hand in it.

I worked at the Maywood Mart Bebop location from 2003 to 2005, although I was a fixture at the store from about the time I was old enough to drive myself there. A large portion of my record collection came out of that store long before I was an employee. Then, it grew even more. Then-manager Alan Hays hired me because of my background in retail and the fact that I knew the product.

The first time I met Elder, it was later in the day, and business was slow. There were about three employees standing behind the counter chitchatting when he walked in to check on some tickets. One of my coworkers was sitting on the counter. Elder walked back and casually said, "You know you're not supposed to sit there." Of course, I immediately asked, "Who was that?"

Since that time, I got to know him better and realized what a friendly, decent person he was, but I also grew to understand the impact Drake had on the local music scene and the people within it.

"Drake was one of a kind in the community," Hays says. "He was laidback, calm and very analytical in his approach to business. He was also a great guy to work for. I appreciated the fact that he was who he was."

Sheila Carter worked with Elder from 1981 until his death, first at the Bebop Metrocenter location and then at the box office.

"He was such a warm, personable person," she says. "You always understood where he was coming from. He was there in every sense of the word. He respected what people did and rewarded loyalty."

Bebop got its start through concert promotion. Elder, along with Kathy Womack (now Morrison) and Wayne Harrison (deceased), begged the officials at what was then the Jackson Municipal Auditorium, now Thalia Mara Hall, to promote a Dan Fogelberg concert. The success of that show helped Elder make Bebop a reality.

"He took a risk as a young person and knocked down the doors at the auditorium and turned that into one of the largest and most successful independent chains in Mississippi with Bebop," Hayes says.

Correction: One of the founders of Bebop was previously reported as Wayne Harris. The correct name should read Wayne Harrison.