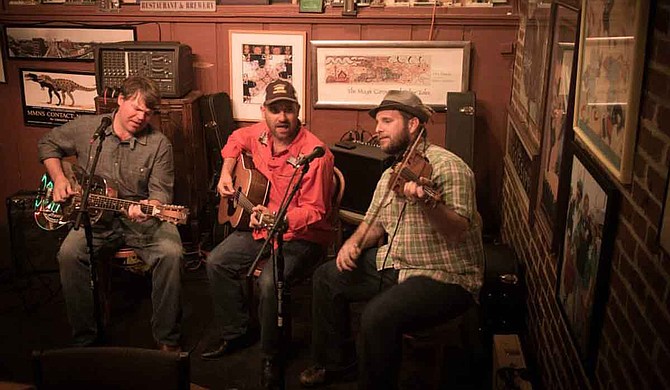 Musician Aven Whittington likes to call The Hustlers "howl-at-the-moon music." Another description may be "front-porch music."

Whittington can't quite pinpoint when The Hustlers were formed, but he knows that the group represents a coming together of sorts for three best friends who also happen to be musicians. "I grew up in Greenwood and can always remember people playing guitar and singing," Whittington says.

The band's first show as The Hustlers may have been at Jackson's long running musical festival, Jubilee! JAM, Whittington says. That show featured him playing steel guitar and Matthew Magee (of Wooden Finger) on fiddle. Guitarist Brian Ledford later joined the duo, completing the lineup.

"Matthew is from south Mississippi and grew up around a lot of fiddlers," Whittington says. "Brian has a background and knowledge of (southern) gospel music, and I come from the blues. Musically, we come from older styles, but it really is a fun excuse to get together and make music."

It's difficult to categorize The Hustlers' sound.

"We play a little of everything and jump around a lot stylistically," Whittington says. "Even if you take someone like Mississippi John Hurt, who does a finger-picking style of blues, it's very different from the music that came from the cotton fields of the Delta. At the end of the day, we just love playing Mississippi music."

Playing steel guitar in The Hustlers also provides Whittington with a unique opportunity. The type of steel guitar he plays is not the typical Hawaiian pedal steel that you may see in country-and-western music. It looks similar to a standard guitar, but features a large metal plate called a "resonator," giving the instrument a distinct sound.

"I was obsessed with resonators, and this music gives me a good outlet for that style," Whittington says.

The Hustlers have also provided him with an outlet for performing alongside musical giants. "We played a festival in the Delta, and Alvin Youngblood Hart was there," he says. "Things like that are so cool."

There are no plans to record with The Hustlers, but Whittington isn't closing the door on the idea. "We have written songs, and we play them in between all the other stuff we do, but we're having such a good time doing what we do," he says.

Perhaps the best way to experience The Hustlers is to catch them live.

The Hustlers will perform at this year's Bright Lights, Belhaven Nights festival at Belhaven Park at 5:30 p.m. The cost is $10. For more information, visit www.greaterbelhaven.com/gbnf/gbnf_BrightLights.php.