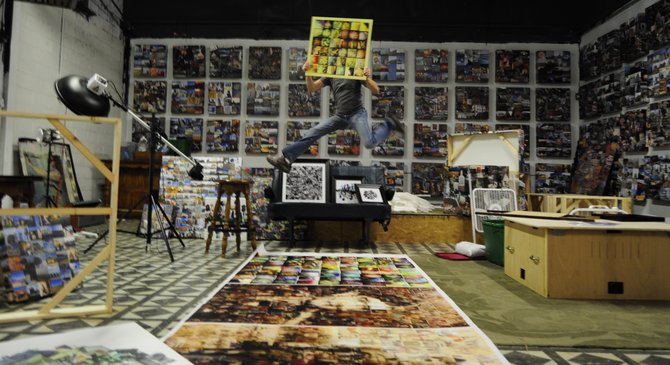 Josh Hailey’s Photamerica project culminates in a blowout at the Mississippi Museum of Art Oct. 3. Photo by Trip Burns.

After 80 weeks of traveling, and a year compiling hundreds of thousands of photos and miles of (virtual) film, Josh Hailey's Photamerica is culminating with a seven-hour, family-friendly blowout Oct. 3.

Jackson artist Hailey conceived Photamerica, (subtitled "the good, the bad, and the beautiful USA") practically on a whim. "I was bored, for one," he says. "The economy was crap. The Occupy movement had just started. ... I was watching a lot of TED Talks and a lot of Kickstarters. The culmination of all that, I just woke up one morning and said, 'I have a van, and I don't have to be here.'" So he got moving.

Hailey's original plan, funded through a Kickstarter campaign, was to visit all 50 states in 52 weeks beginning Jan. 1, 2012. Eventually, he extended his plans by another 30 weeks, returning to Jackson October 2013. He rented a space in Fondren where he displayed photo-collage canvases of every state (he's since moved into The Hatch in midtown). He put the photos on T-shirts, shower curtains, fine-art prints and everything in between. In his spare time, Hailey began formulating plans for heARTalot to bring the arts into Mississippi's public schools. Proceeds from the Photamerica website and the event benefit heARTalot.

The event marks the premiere of the music video "This Land is Art Land," and numerous interactive Story Projectors featuring interviews and film of each state. But that's not all. Photamerica, new art, games, barbecue and music will be at the Mississippi Museum of Art (380 S. Lamar St.), the Arts Center of Mississippi (201 E. Pascagoula St.) and the Art Garden.

The fun begins at 5 p.m. and lasts until midnight. Paperclip Scientists and Vibe Doctors will play, followed by DJ Scrap Dirty and Hot & Lonely. And it's all free! For more info, visit Photamerica Premiere on Facebook and Photamerica.com.