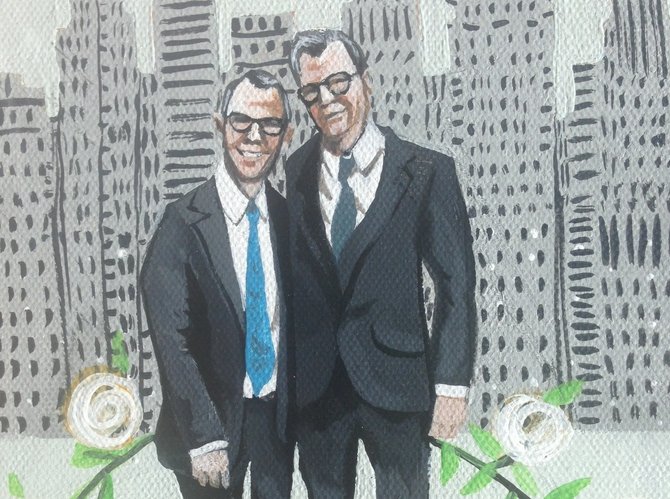 Local art can sometimes be the perfect gift.

When a friend from college called to tell me that he and his boyfriend were getting married, I was thrilled at the news and overwhelmingly happy for them.

Then a wave of anxiety hit. Because I'd want to send them a gift—a gift for one of my dearest friends and his beloved, a gentleman who recently left his position as creative director of Martha Stewart Living to freelance for clients like Williams-Sonoma. I repeat, he worked for Martha freaking Stewart. Hello, wedding present pressure! Could I find a present that Martha would deem a good thing?

My friend is originally from Jackson, and he and his now-husband collect art, so I decided that a piece by a Jackson artist might be just the ticket for something unique and special. Artist Ginger Williams-Cook is someone whose work I've followed for a number of years. She does a lot of drawings, but also paintings and unique pieces, such as her clever nesting dolls of pop-culture characters ranging from the "Golden Girls" to KISS. Williams-Cook also paints a lot of portraits, and her style is one I enjoy; it often reminds me a little bit of Mary Cassatt's Impressionism. I knew that Williams-Cook often paints portraits on commission, and I had seen several pieces she'd done recently of brides and grooms, and even a her baby's birth announcement.

When my friend texted a picture of him and his hubs with their adorable dog in front of their New York City apartment on the way to City Hall to get hitched, I knew I had the perfect source material for a commissioned work. After chatting with Williams-Cook about the couple to determine what to put in the background (we settled on a city skyline) and sending her the photo, I eagerly awaited the finished product. She sent me a photo of the painting's progress along the way, and when I picked it up, I knew it was perfect.

Speaking of which, some weeks later, I learned that the second in a new series of after-hours pop-up gallery exhibits at the Mississippi Museum of Art would feature work by Williams-Cook and Jason "Twiggy" Lot. The pop-up galleries are for once a month from 5:30-7:30 p.m., and they give exposure to local artists and musicians. Being a fan of Williams-Cook and also owning a painting from a series on which William Goodman and Twiggy collaborated, I immediately planned to attend.

The night of the event, I checked with a friend who lives downtown to see about meeting up there, and I headed over after work. Upon arrival, I ran into several friends I hadn't seen in a while and had a great time catching up. The crowd represented a small but diverse crowd of artists, families, young professionals and established art patrons, who mingled and took in the three walls of space on which Williams-Cook and Lott installed their paintings, mixed-media works and custom furniture.

In addition to the pop-up exhibit, visitors could browse the gift shop (that night, one of my friends purchased an adorable pair of felt baby booties shaped like giraffes to give a mother-to-be), as well as the permanent gallery and a Norman Rockwell exhibit, so it was a great opportunity to take in a lot of art in a laid-back, social setting.

It's great to see the museum committing to not only showing large-scale exhibits of established artists, but also to encouraging and offering space to local working artists. I'm told the pop-up series will continue throughout the fall, with the next one scheduled for Sept. 18. It will feature Figment Jackson artists.

Having thoroughly enjoyed the art and the company I found at the August installment, I know I'll plan on going back for the next one. Hopefully, I'll see you there, too.