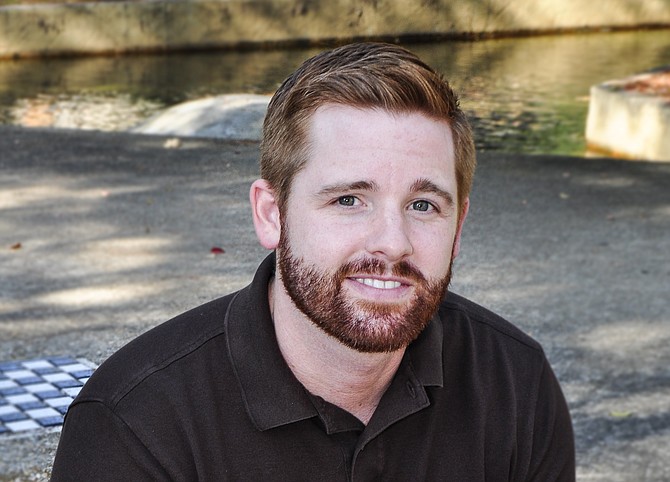 Ben Ellard, program manager at the Center for Violence Prevention in Pearl, leads an initiative to educate batterers to end repeat offenses. Photo by Trip Burns.

Early on in Ben Ellard's career as the program manager of the Batterer's Intervention Program at Pearl's Center for Violence Prevention, he had a profound experience while processing a new program participant.

"She came ... with the mentality that she shouldn't be there," he said. Like all offenders, the woman filled out a detailed form asking about abusive experiences, past and present. "By the time she finished that paperwork, she said to me, 'I didn't even know some of this was abuse.'"

With a 2008 bachelor's degree in hospitality management from the University of Mississippi, Ellard, 29, managed a restaurant prior to taking the job with the CVP.

"I was just making money for people. It wasn't very fulfilling," he said. "When I made this transition, (I wanted to) get into something that was helpful to people and to the community. I was trying to look for another route to go into. I knew I wasn't going to be rolling in the money or anything, but that's just the route that I wanted to go in."

Women are in a distinct minority among offenders. While the statistics vary depending on their source, the overwhelming evidence is that most domestic abusers, as many as 85 percent, are male. And fewer than half the victims will ever report the crime to authorities or seek shelter and other remedies.

Some solutions are definitely more effective than others. One of the most successful is the Duluth Model, first implemented in Minnesota in 1981. The model recognizes that social services and justice systems work best together to protect victims from ongoing abuse. That protection is the driver for every action within the model. It provides a blueprint for community response and interagency coordination to stem the tide of domestic violence.

Key within the model is offender intervention, but in Mississippi, the only offender program designed on the Duluth Model is the CVP's program, which JFP Chick Ball proceeds helped launch. Since implementing the Batterer's Intervention Program, or BIP, in 2009, thousands of individuals—men and women—have completed the six-month curriculum.

More than anger management, the premise is that perpetrators must self-identify their core (and mostly unconscious) beliefs about power and control within relationships, and then reframe their beliefs in terms of equality. Interpersonal violence, regardless of specific modality—mental and physical domestic abuse, assault, stalking, rape or sexual trafficking—all flow from the need to exert power and control over another person.

Rates of domestic violence frequently spike before and after the holidays, "when everyone's partying, and there's money (stresses) involved," and family issues become magnified, Ellard said.

While the elements of abusive behavior are largely the same for both men and women, one facet applies only to men: male privilege. It's a "king of the castle" attitude that has men using women and children as servants. The mindset says only men can make important decisions and only they can say who plays what roles.

Sandy Middleton, the CVP's executive director (and Ellard's mom), has seen the results of male privilege in her life. "My dad was a Baptist preacher, and you talk about male privilege, he had it," she said. "I think there's a fine line. Male privilege is the abuse of respect, and I think a lot of times, (women) push it too far. In a relationship, it becomes such a feminist thing that a woman can't do anything for her man without it being misread as male privilege. ... We see that a lot, this real hard-nosed approach."

"Generally, the people themselves are different to deal with, but I think the situation is usually the same," Ellard added. "The women have just as big a problem with power and control as men do. It's usually harder for the women to see that than it is for the men."

From Threats to Fairness

Over the course of the six-month BIP, coercion and threats become negotiation and fairness. Emotional abuse changes to respect, and minimizing, denying and blaming transforms into honesty and accountability. And, for the men, male privilege becomes shared responsibility. The BIP's recidivism rate demonstrates its effectiveness. Fewer than 2 to 3 percent of abusers who complete the program re-offend, Ellard said.

Typically, domestic-violence offenders come into the program under a court order. Judges give them a choice: Attend BIP classes or go to jail. Fail to show up or complete the program, and your sentence reverts to traditional punishment—fines and time behind bars.

Part of the deal is that participants pay $25 for each monthly session to cover facilitator training, administration and incidental costs such as travel. Each class, which averages about 15 participants, requires two facilitators, one man and one woman, who generally receive a nominal $50 per-class payment, and a law-enforcement officer to ensure everyone's safety.

The classes deal with all facets of an abuser's state of mind, and people come into the course at different points, which mixes newcomers and program veterans. "All of our facilitators really push participants to be vocal in class—answer questions, ask questions. You're always going to have some who just rides the 24 weeks out, and those are usually the ones who don't get very much out of the program," Ellard said.

"... If someone doesn't want to learn and doesn't want to change, they're not going to. Usually, after the first five or six classes, that wall kind of gets broken down."

The format uses videos of situations of abusive power and control. "A lot of times, they don't see themselves doing that until they watch it on the video, and then the facilitators apply it," Middleton said.

"... So many of them have been abused themselves. So when they see that on the screen, many of them can identify with when they were abused. So you've got all these feelings that come up that they might not have thought about since they were a little boy, and they were kicked or cussed or whatever, and all of a sudden, there that is. They get to deal with that and process it. The light bulb comes on. 'Oh my God. That's me.' It's a pretty dramatic thing."

Hard Work, But Worth It

Currently, the CVP runs fewer than a dozen classes in the 10-county area it covers in central Mississippi. Middleton indicated that many municipalities are reluctant to use the BIP because it requires them to makes some changes to their judicial system to enable Ellard and his team to work effectively within it. Clinton, for example, devotes one court day per month to domestic-violence cases, and the Rankin County Justice Court hears these cases three times a month. Ellard is always on site to consult with prosecutors and judges and begin the process for offenders.

"If my court is supporting me and supports the program, believes in the program and will stand up (for) what they've told the offender in court, it's smooth sailing," Ellard said. Attendees must know that they will suffer consequences for not completing the program. "If (judges) don't stand behind that, it causes problems," he added, saying that it undermines the authority of the BIP and its facilitators. On occasions where abusers volunteer for the program, they rarely complete it. The work isn't easy, and without consequences, it's too easy to drop out.

"If you don't have consistency and discipline and standards and boundaries, then people are going to be all over the map," Middleton said.

"Therapy and behavior modification are hard work. When you start looking at yourself and examining yourself for what you need to change, and getting into that stuff that makes you feel bad, it's tough. It's hard," she said. "I think a lot of times, some of our offenders assume that it's like the old anger-management classes where they come in and get taught how to breathe deep and count to 10. This isn't about that, but that's why it works and anger management doesn't."

When law enforcement and judges choose to implement the BIP, they have to make a commitment to follow up and stay the course.

"This is an opportunity for (an offender) to change his life and stay out of jail and keep his job," Middleton said. "... But you have to pay $25 a month, and you have to come to class. These are the things that you have to do."

Middleton and Ellard estimate that the BIP serves fewer than half the offenders it could reach with additional resources. Ellard's first task when he took on the job in 2010 was to speak with people dealing with domestic violence—sheriffs, police, prosecutors and judges. Often, they were unaware of the problem within their communities. "We don't have domestic violence here," was a common refrain. But, as Middleton points out, when victims don't have confidence in the system, they tend not to come forward.

Ellard believes that solutions to the problem can't come only from women, and right now, women are the primary drivers of increasing awareness and advocating for victims. Men need to step up when they see their male friends acting badly, for example, and their voices are necessary.

The BIP's meager resources, combined with some municipalities' intractability, are a constant source of frustration for Middleton. "If we had two more of Ben, we'd be able to pretty well saturate the district," she said.

The Batterer's Intervention Program heals and changes the lives of offenders and their targets, something Middleton and Ellard hear every day from participants and their families.

"If you've got the vaccine for smallpox, you want everybody to know about it. If I had the cure for AIDS out here, or the cure for Ebola, I'd want everybody to know it and get some of it, and then I'd be frustrated if they didn't," Middleton said. "It's kind of the same thing. We can prove that this program works. When our courts and our court officials ignore it, because either they're used to doing something different, or they may not know us—there's just some excuse why (they) don't use it. It's really the most frustrating thing of all."

Learn more about the BIP program and how to get involved on the center's website at mscvp.org/batterers-intervention/.