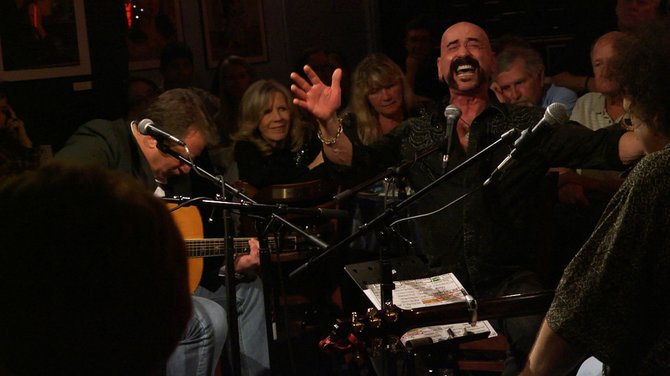 Jimbeau Hinson performs at the Bluebird Café in Nashville.

Jimbeau Hinson is one of the first openly bisexual men in country music.

"Beautiful Jim" is an intimate documentary portrait of bisexual singer-songwriter and raconteur Jimbeau Hinson. The film, which Rex Jones directed, conveys Hinson's life experience through a series of candid interviews and segues during his musical performance. Jones balances the expository, sometimes provocative narration with photographic stills, shots of memorabilia and well-placed non-verbal sequences that show the full dimension of Hinson's story.

As a boy growing up in Newton, Miss., Hinson earned recognition as a singer at an early age. When his voice changed radically at the age of 14, his singing career lost momentum. Determined to be a songwriter instead, he followed his dreams to Nashville where he eventually found success. Best known for his work with The Oak Ridge Boys, the self-described "first openly bisexual man in the county music industry" faced numerous challenges in life and career. Hinson was diagnosed with HIV in 1985. Since then, he's survived two, near-fatal bouts of full-blown AIDS but has lived to continue writing, recording and performing his music.

Rex Jones is a filmmaker on staff with The Southern Documentary Project (SouthDocs.org). The project is affiliated with the Meek School of Journalism and New Media at Ole Miss. SouthDocs is also a division of The Center for the Study of Southern Culture.

"As a documentary filmmaker, it's my job to make films about Mississippi and the South," Jones says. "With such wonderfully fertile ground for telling stories, I have a lot of rich material to work with."

A native of Hickory, Miss., Jones began his professional career in computers. In 1992, he graduated from Mississippi State University with two degrees, a master's in business administration and a bachelor's in computer science. He worked in IT for 15 years. Somewhere along the way, he became fascinated with documentary film as a creative way to effect change in the world. Though he knew very little about the process, he eventually shot his first movie.

"I had a grave dowser come to my ancestral church and use his supernatural powers to find unmarked graves in the cemetery," Jones says. "It was amazing to watch. I thought, what better topic than this for a documentary? I bought a cheap Handycam and went out there and followed him around the cemetery."

To Jones' surprise, several film festivals accepted the film he put together, titled "Dowsing Spring Hill." Ready for a change of vocation, Jones built off the success of his first effort, applied to film school and enrolled at Montana State University.

In 2009, he returned to Mississippi with a master's degree in science and natural history filmmaking.

"Beautiful Jim" is Jones' 12th production under the auspices of SouthDocs and his first feature-length film. Through serendipity and Google, he discovered Jimbeau Hinson in a blog entry about bottle collecting in Newton, the singer-songwriter's hometown, just eight miles from Hickory.

"I was fascinated by his story," Jones says. "He's overcome so much adversity in his life and has done so many wonderful things. I was drawn to his story and to him. Being from the same neck of the woods as myself, I knew I had to reach out."

Hinson's response was affirmative and enthusiastic, setting the tone for the film that took about six months to complete. Between Hinson's generosity and the depth of Jones' interest and appreciation, the film telegraphs an immediacy of rapport and open communication

"It's a collaboration," Jones says. "I'm very fortunate to be able to quickly reach a level of comfort and intimacy with people when I'm doing these films. It really helps when you're doing that exchange of information."

Shot in multiple locations in Tennessee and Mississippi, Jones' film displays a fine eye for landscape and frame. Throughout the film, he plants moments of contemplation—a time-lapsed sunrise over a fallow field; a silent shot of Hinson sitting on a bench in Newton with the town water tower hovering in the distance— purely visual moments that evoke a sense of place and regional identity.

"Beautiful Jim" is one of three LGBT films included the 2014 Crossroads Film Festival. Though Jones did not set out to make a film in that category, he hopes the documentary will be relatable to a broad range of people.

"If I can reach the LGBT community and the HIV AIDS community, the songwriting community or small town MS and people from the south, then that's the reason for the movie," Jones says. "We all embody people who have struggled. If they're an underdog, then it's even better."