Tom Thomsen's Heart for the Arts 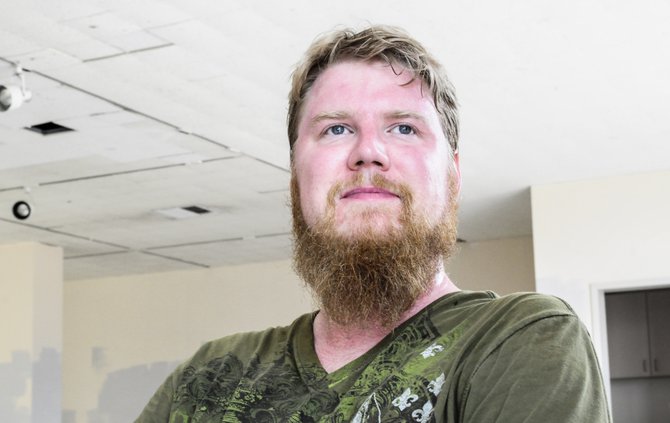 Tom Thomsen’s love of art and artists inspired him to form the Southern Artist’s Alliance to showcase unknown talents. Photo by Trip Burns.

Tom Thomsen's artistic career is long and varied. The Nebraska native—and former farm boy—began playing piano at age 4. He has written scores for independent films, produced comedy shows in New York City and even had a bit part in the HBO series "Oz."

In 2008, he was laid off from his job—similar to many others across the country. With career prospects thin, Thomsen decided self-employment was the way to go. His background in agriculture and the availability of bamboo in Mississippi and Louisiana brought him to Jackson, where he began a business making and selling items made from the ubiquitous plant.

"I moved here with a duffel bag and a laptop," he says.

Last year, at the ripe old age of 34, Thomsen suffered a heart attack brought on by the stress of running a small business and his family history. With his health on the mend, he has returned to the arts, but this time in a supporting role.

Thomsen became an agent for his friend David Estis, a sculptor, metal crafter and furniture maker.

"I was at an art show with him and found a bunch of other artists who weren't represented," he says. "They had a ton of work, but no time and no ability to produce their own shows." For every artist displaying, Thomsen says that hundreds of others don't have the means to show their talents. Sensing opportunity, he formed the Southern Artist's Alliance a few months ago.

The group's premiere show opens June 7 at the Arts Center of Mississippi.

"Part of this is because I'm good at designing shows, and part is timing," Thomsen says. The center is renovating its building, and the show will be the first exhibit held there after completion. He's also hoping attendees of the USA International Ballet Competition at Thalia Mara Hall will give the show a big audience.

The alliance has a dual purpose: representing individual artists and holding monthly shows with numerous members. "The emphasis is on art 'show,' where we'll have interactive demonstrations, live auctions, (and) a lot of door prizes," Thomsen says. "It's not just a gallery exhibit."

The alliance receives applications daily and has about 12 artists on board for the premiere. "We've got sculptors, potters, painters, wax boutiques ... artists of every stripe," he says. "We're trying not just to have something for everyone, which we will, but also show Jacksonians that, for (all) the art they have access to, there's a whole community that they're just not seeing."

The alliance includes artists beyond city's borders, and Thomsen is planning pop-up shows in several cities including Tupelo and Memphis. Jackson is the home base, however, and Thomsen places special emphasis on providing opportunities for local artists and their prolific output.

"I go to their houses to photograph their work for the website. They look like hoarders. Every shelf is full of their work, every cabinet, every surface is filled with their art," he says. "I'm like, 'This needs to be on display somewhere.'"

With so much artistic bounty available, Thomsen is being necessarily choosy about what works to include in the shows, but as the alliance's momentum builds, he intends to provide plenty of opportunities.

Thomsen characterizes the alliance as an artist's club, in contrast to a traditional artist's agency. Currently, membership is $100, which covers expenses for venues and caterers in addition to supporting charities such as the Make-a-Wish Foundation, which makes wishes come true for seriously ill children.

"Our goal is very simple: Put on a show at least once a month and get as many people there to show them many different types of art," Thomsen says.

"Artists that I work with, they have a compulsion to create. If we can keep them in shows and keep selling art, they can keep creating and honing their craft. ... I'm the guy running the show, but it's me and the artists. Everyone has their own input."

The Southern Artist's Alliance premiere show opens June 7 at the Arts Center of Mississippi (201 E. Pascagoula St., 601-960-1500) and runs through the end of the month. Admission is $20 at the door or $15 in advance. For additional information, visit southernartistsalliance.com.