Residents, Businesses Could Get Relief from Busted Pipes 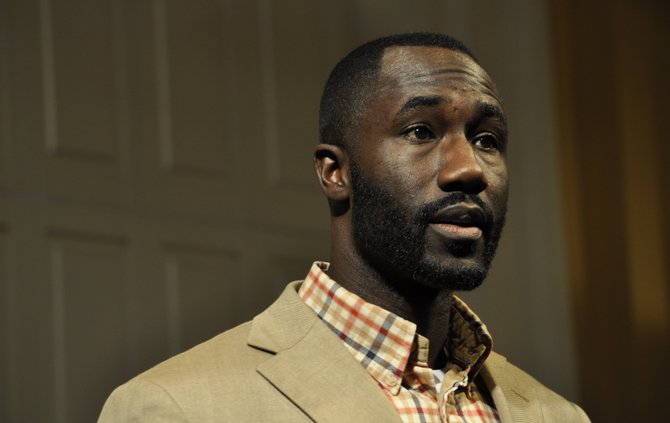 Jackson Ward 6 Councilman Tony Yarber wants home and business owners to have protection for broken pipes under their property. Photo by Trip Burns.

When employees at Rainbow Natural Grocery Co-op on Old Canton Road arrived to open the store Feb. 8, they discovered a familiar problem. The store was flooded. But unlike previous deluges, Rainbow couldn't blame this incident on rain. A water pipe under Montgomery Hardware (Rainbow's neighbor to the south) burst, causing problems for businesses as far as a block away at Babalu Tacos and Tapas on Duling Avenue.

The break resulted in a standoff: Montgomery's owner, who does not live in Jackson, maintained that the break wasn't his problem and that the city should fix it. The city pushed the responsibility back onto the property owner. The city's position is that its liability ends at the street.

The disagreement left Rainbow with little choice: Fix the pipe or shut down until someone else got around to it.

"We were one of the four businesses affected where water was really crucial to our existence," Rainbow's CEO Luke Lundemo said. He said Rainbow would probably fight the city over the cost of the repairs, because city statutes are unclear over whose responsibility it was to fix the line. Lundemo said he has yet to receive a bill from the contractor, who worked all day Saturday and into the night to resolve the issue.

Flooding isn't new for Rainbow. In 2001, Robert Malouf and Ann Guion, owners of St. Martin's Gallery, also located in Fondren Plaza, built an addition at the north end of the shopping center, building over a city drain that once channeled water rushing downhill from State Street along Fondren Place.

Though it seems city engineers would have anticipated problems, builders provided no alternative to the drain, and since then, stores in the plaza regularly have water coming through the back of the buildings just about every time Jackson gets heavy rain.

The city has made at least one ineffective attempt to fix the problem, and Jackson has delayed a Fondren enhancement project that would address that issue, among others.

"The city isn't going to be able to start that project in April, it sounds like," Lundemo said.

Between the city's aging water and sewer systems and sub-freezing weather, broken pipes have become a contentious issue in Jackson. Both the city's Public Works Department and private plumbers have had plenty to contend with.

Some relief, at least for Jackson's homeowners, may be in the offing. The National League of Cities offers a service-line warranty program through Canonsburg, Pa.-based Utility Service Partners, Inc. About 200 cities across the nation—from Anniston, Ala., to Atlanta, Ga., to Riverton, Wyo.—have offered the program to their residents since 2010 when the NLC began offering it.

While it is not clear whether business owners could participate in the program, the warranties would cover the cost of expensive water- and sewer-line repairs for residents who choose to purchase a warranty.

Jackson City Councilman Tony Yarber, of Ward 6, is an advocate for bringing the program to Jackson. For a low monthly rate, he said, homeowners could quickly get needed repairs to water and sewer pipes on (or under) their properties without haggling with the city.

"As a result of the (Environmental Protection Agency) consent decree, residents will be forced to do repairs if there are issues with their lines," Yarber told the Jackson Free Press.

Under the consent decree, the city will do "smoke" tests to test lines throughout the city, and some of the required repairs would likely fall to homeowners. Yarber said this program would provide a way to mitigate much of those costs—up to $4,000 per occurrence—at a cost of about $7 to $8 per month.

Not only would the program give Jacksonians a reasonable alternative to big out-of-pockets costs, it would also provide the city with some needed revenue through royalties, potentially making it a win for all concerned. The program comes at no cost to the city and would use area plumbers to make repairs.

"The work is performed by licensed, local plumbers who will call the customer within one hour of filing a claim," the Utility Service Partners website states. "The repair is performed professionally and quickly, typically within 24 hours. USP provides a personally staffed 24/7 repair hotline for residents, 365 days a year."

Yarber brought one aspect of the program to the regular Jackson City Council meeting Feb. 11 in an effort to get the program moving. USP asks participating cities to allow them to use the city seal in its marketing materials. Citing the need for further information and a concern about the city's liabilities under the program, two council members objected: Ward 3's Larita Cooper-Stokes and Ward 2's Melvin Priester Jr.

"We had two briefings on this," where USP representatives came to Jackson to speak with the council and answer questions, Yarber said. "I felt that it was being politicized, so I pulled it." He added that he will be speaking to his fellow council members to assuage their doubts.

"If I've got four votes to move it, I'll put it back on the agenda," Yarber said.

Barrett-Simon said during the council meeting that the National League of Cities and the cities that have put the program in place have thoroughly vetted the program.

Greg Rassel, director of Royal Oak's Department of Public Service, told the Royal Oak Patch, a community news website, that he talked with other public-works directors about the program before advising his city to sign on.  "They have all been very satisfied," Rassel said. "It's been headache-free for them as far as the administration, and they have had no complaints about claims not being paid or filing claims."

If the warranty were to be offered to business owners, Lundemo said Rainbow could be interested.

"It sounds like it would be a wise business decision to take that kind of insurance," he said.

Procedurally, we’ve already put this item back on the agenda (our current agenda is up on the City's webpage, it's Item 24, http://www.city.jackson.ms.us/index.a...">http://www.city.jackson.ms.us/index.a... ) and the plan is to put it before the Planning Committee so that we can get more information and decide whether we want to either go with this specific company, invite bids from other insurance companies, or perhaps even do a self-insurance plan. Hopefully, we’ll avoid some of the confusion and questions seen when cities like San Diego went into a joint marketing venture with Utility Service Partners. http://www.utsandiego.com/news/2013/N...">http://www.utsandiego.com/news/2013/N...

I agree looking into this agreement more doesn't hurt and the fact that they wanted the paperwork to read COJ like it was the city who was the insurers is misleading. I think its a good plan but COJ needs to stay off the letterhead.

My question is what does my home insurance cover?!?

"My question is what does my home insurance cover?!?"

All property policies that I am aware of cover freezing and rupturing of pipes, but only the pipes within your insured structure.

Homeowner insurance varies as to what it will cover. Read your policy. Some may indeed cover the pipes in your house, but do not cover water damage to floors, carpets, walls or furniture or items such as mold resulting from the damage. Others may not cover pipe issues between the house to the street.