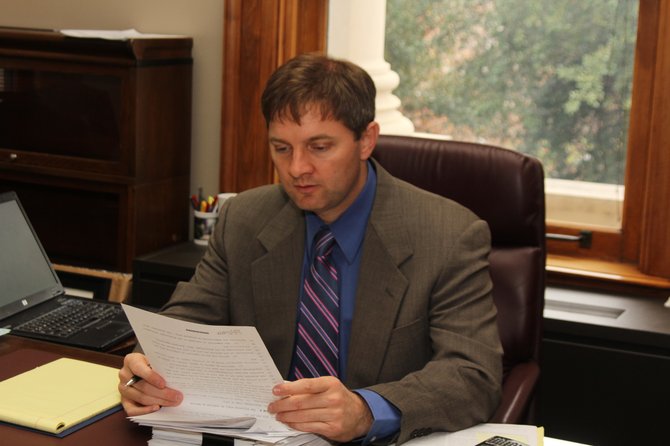 Courts in several states have said that proposals to limit abortion access are unconstitutional. That has not deterried Mississippi lawmakers such as Sen. Joey Fillingane, R-Sumrall, to file several such bills this year. Photo by Virginia Schreiber.

Sen. Joey Fillingane, R-Sumrall, knows his anti-abortion "heartbeat" bill likely will not survive the current session of the Mississippi Legislature, but he introduced it anyway.

"I don't know if (my) bill will survive if there's pending litigation," Fillingane told the Jackson Free Press last week.

Fillingane's "heartbeat" bill would revoke the licenses of doctors who perform abortions after 12 weeks when they detect a fetal heartbeat. Other states have passed similar laws; however, in North Carolina and North Dakota judges have ruled such laws unconstitutional. Other heartbeat laws are under appeal.

When it comes to laws restricting abortion and other reproductive rights, Mississippi legislators seem happy to let the legal process play out elsewhere, Fillingane said—for the most part. The state is still embroiled in a lawsuit over a 2012 law with the state's single surviving abortion clinic. Some Republicans (including Mississippi. Gov. Phil Bryant) have admitted that the law, which requires the clinic's doctors to have admitting privileges at a local hospital, was specifically designed to end all access to legal abortion in the state. That admission may play against the bill in court.

No local hospital will grant admitting privileges to doctors at the Jackson Women's Health Organization. So far, JWHO has successfully delayed the state from implementing the 2012 law. The law is scheduled for a jury trial in March. Similar bills in Texas and Wisconsin also face legal challenges.

Despite remote chances of their bills passing, the state's Republican representatives and senators continue to push for laws restricting women's reproductive rights, automatically refiling bills year after year on the chance they might get passed.

A bill from Rep. Andy Gipson, R-Braxton, for example, which seeks to outlaw abortions after 20 weeks, seems destined for the same dustbin as Fillingane's bill. Judges in Texas and Arizona have ruled laws similar to the one proposed in Gipson's bill as unconstitutional.

Lawmakers on both sides of the partisan divide are pushing legislation about sex education. Democrats advocate for allowing medically accurate information on contraception, pregnancy and abortion into school curricula, while Republican-sponsored bills seek to prohibit any such knowledge to infiltrate young minds, at least not in the Mississippi's public schools.

One bill advocates testing for drug use and charging pregnant women with child abuse if they are arrested for violating drug laws. Another bill seeks to create the offense of chemical endangerment of a child or fetus. Other legislation, primarily introduced by Democratic lawmakers, seeks to strengthen and clarify laws against interpersonal violence, bullying and sex trafficking, all areas of long-standing concern at the state attorney general's office.

Some legislation primarily affecting women is taking on a less partisan tone.

Last year, for instance, the Governor's Domestic Violence Task Force discovered that the state Department of Health was ineffectively managing funds allocated to the state's shelters. The task force's initial findings showed that MSDH did not distribute some $600,000 in a two-year period, and a subsequent report from the Joint Legislative Committee on Performance Evaluation and Expenditure Review upped that figure to $1.6 million over four years.

With considerable bipartisan support (including that of Republican Gov. Phil Bryant), the task force is advocating for an independent Commission on Interpersonal Violence to oversee collection and disbursement of those funds, and to standardize care for victims of violence in the state's shelters. It also seeks to strengthen privacy laws to protect and benefit victims.

But formation of an independent commission is seeing some Republican resistance. Although he hasn't publicly come out against the bipartisan bills, Lt. Gov. Tate Reeves is reportedly holding the traditional Republican position of limiting government involvement and expansion. Rep. Becky Currie, R-Brookhaven, has introduced legislation to keep the funds allocated for domestic-violence shelters under control of an existing department, finance and administration, and to cap how much money shelters can receive.

Middleton is a big supporter of the independent commission. "I'm thrilled that we're moving like gangbusters through the House," Middleton said, though she sees a thornier path for the bill in the Senate.

"In the Senate, things get complicated. We're not sure where the leadership stands," she said, referring to Reeves, whose office did not return calls for comment.

What is Interpersonal Violence?

The World Health Organization defines interpersonal violence as any behavior within a relationship that causes physical, psychological or sexual harm to those in the relationship. It generally describes violence where the perpetrator and the victim are acquainted.

Although the majority of the victims of such violence are women in heterosexual relationships, men and those in same-sex relationships are not immune.

Interpersonal violence can include: