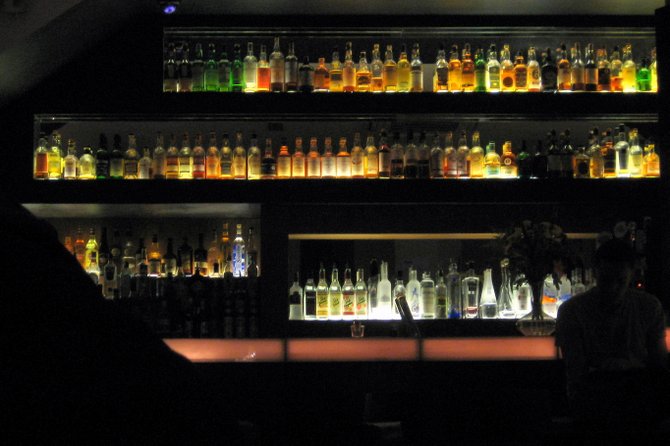 With the recent advent of “whiskey libraries,” the manly elixir is experiencing a revival.

Although this column is referred to as "Girl About Town," I feel compelled to address something typically considered "manly" that seems to be all the rage these days: whiskey. I know there are ladies who enjoy the brown liquor. And I'm aware that Knob Creek's "When I see a man drinking bourbon" ads (which premiered during "Mad Men," a show that itself harkens back to times with strictly defined gender roles and expectations) bore the brunt of criticism for being supposedly sexist and defining "manhood" in a certain, stereotypical way.

Nonetheless, I am a gal who does not drink bourbon. Or whiskey. Or Scotch. Or anything brown. I'm evidently not woman enough to handle it, and I'm OK with that.

So, in my mind, whiskey remains a manly drink. It makes me think about my grandfather, a fascinatingly interesting man and big fan of Manhattans and Old Fashioneds as well as gourmet food who built things with his hands, cussed like a sailor and was tough as nails.

As it so happens, my manfriend also enjoys whiskey and recently had a birthday. While thinking about what to do for the occasion, I thought about our local restaurants and bars that have joined the ranks of "whiskey libraries." I decided this might be an occasion to test out the offerings.

The Manship (1200 N. State St., 601-398-4562, themanshipjackson.com) boasts quite the selection—more than 300 whiskeys. Such a collection needs a curator, so I turned to co-owner and manager Steven O'Neill and asked him to select a few. He graciously obliged and over the course of dinner presented two flights ("flights" are a sampling. In this case, each flight consisted of four different spirits). It was a great way to get to try a number of fine spirits—some of which were from bottles hard to come by—and much appreciated. And manly, I suppose.

For those wanting a road trip—and who have a place to stay or a designated driver—another Mississippi bar with quite the selection of whiskeys is Robert St. John's Branch (3810 Hardy St., Hattiesburg, 601-264-0657, branchcocktailbar.com). I've only been once, after dinner at the adjacent Purple Parrot, but this newest addition to St. John's restaurant family is a cool spot. With more than 150 whiskeys, there's a lot to work your way through if that's your spirit of choice. (If, like me, it's not yours, don't worry: The cellar's 1,000-label wine selection, more than 120 beers, and a host of other spirits and craft cocktails provide plenty of options.)

For those wanting to stock your home bar with some brown stuff, look to the guidance of the guys at Fondren Cellars (633 Duling Ave., 769-216-2323, fondrencellars.com). I occasionally procure a bottle of something brown for the fellow, and the staff here always do a great job of helping me find something he enjoys. Fondren Cellars carries a great selection of bottles you'll recognize as well—as small-batch producers you may not—and the guys can guide you according to your tastes and price point.

On a recent visit, I asked Casey Hardigree for some recommendations, as well as a refresher on what exactly makes a brown liquor bourbon as opposed to rye or whiskey. The answer is the percentage of corn from which the alcohol is made—bourbon has to be at least 51 percent corn (the source of its sweetness). While some hardliners maintain that to truly be "bourbon," a spirit of that percentage must also come from Kentucky, it's technically just the corn content that is the determining factor.

Hardigree suggested bottles of Elmer T. Lee (produced by Buffalo Trace) and Willett, a special-order bottle that can be hard to find. He also pointed out a few producers that only recently began selling in Mississippi, including Koval, from Chicago, who produces not only bourbon, but also millet, rye and four-grain.

To go along with these offerings, the shop stocks all the accompaniments to ensure you can mix up some good cocktails if you don't want to just drink it straight—its selection of bitters is always tempting.

So, here's to all the men (and women) who want to raise a glass of whiskey. It seems we're in the midst of a renaissance of your drink. So get out there and drink local (and responsibly)!