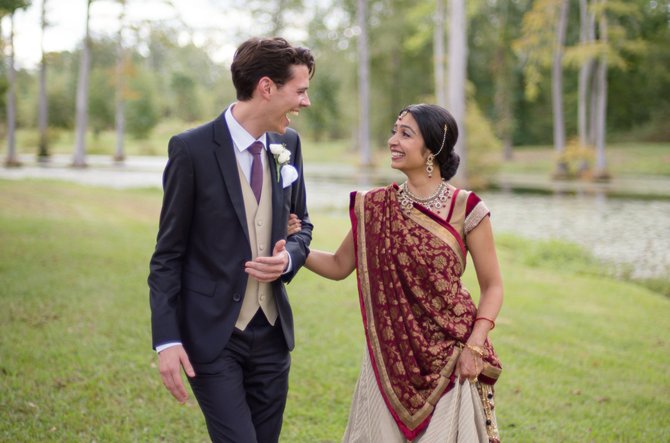 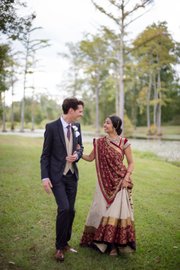 The best weddings combine personal aspects into something fully unique to the couple. When Setu Raval wed Zach Seivers, the occasion incorporated Indian culture, southern family values, cinematic flair, and family and friends from around the world.

The couple met while attending film school in their home state, at North Carolina School of Arts. Zach was a senior studying post production and Setu, a sophomore majoring in film producing. Their roommates plotted to set Setu and Zach up. They didn't think it would be serious—Zach was moving to California after graduating later that year—but quickly found themselves in a relationship they hadn't quite expected. After two years of long-distance and five more years together in Los Angeles, Zach and Setu got engaged.

Because Setu's parents, who were hosting the nuptials, had moved to Jackson, the couple quickly decided to have the wedding in Mississippi. "It became this destination wedding," Zach says. "Everyone else, including us, had to fly in."

And while its funny to think of Jackson as a destination wedding locale—a descriptor typically reserved for the likes of the Bahamas and Jamaica—Setu says they found no shortage of highly capable Jackson vendors to pull off their big day.

Plus, Zach adds, the geographic location naturally helped them combine their two contrasting cultures. "The Indian side of the wedding is so apparent and so vibrant, that throughout the process (we kept coming back to) how do we include the Zach side of it?" Zach says. "Everything could be a little bit Indian but, because it was in Jackson, everything organically had sort of a southern twist to it."

Indian weddings are, historically and culturally, a big deal, with celebrations include multiple events across several days. "For three days you have three different events, morning and night," Setu explains. "The first night is the henna ceremony, which is the henna you put on your hands and feet—its kind of bridal makeup." Another tradition is called a garba, which Setu and Zach held the night before the wedding. "It was one of my favorite things to do growing up, so instead of a rehearsal dinner, we did a garba night. It was a big dance night," Setu says.

The garba was the most traditionally Indian event—Zach, his family and many of the couple's friends joined Setu's family in wearing Indian wedding garb. But food was a unifying element throughout the week. "We had people from all over the world—Indian, American, Dutch, Mexican ... so we wanted to make sure the food was pretty international," Zach says.

"We had Indian dishes catered by Ruchi India, and then Ruchi has a southern catering partner, so each night we had traditional southern food, too."

The wedding itself was where Zach and Setu really combined their cultures, passions and influences into a ceremony that spoke to who they are as a couple. Setu wore a traditional Indian wedding dress while Zach wore a suit, and they pulled elements of both cultures for the ceremony.

"Zach and I both wanted the ceremony to reflect who we are and what we believe, so instead of having a traditional Indian priest or an American priest, we had our screenwriting teacher from school," Setu says. "He conducted the ceremony—he wrote this beautiful script." For the Indian ceremony elements, Setu and Zach picked a few favorite Hindu traditions, and Setu's uncle performed them while screenwriting professor Ron Stacker Thompson translated and described what was happening for the audience.

"For me, what I love about (American weddings) is that your guests are very much a part of the ceremony, and everyone that was there was so important to us, so we wanted them to be as involved as possible," Setu says.

Most weddings are whirlwinds for the couple, and that can be especially true for occasions with so many guests coming from far off, and so much family involvement—Setu's family hosted events, her event-planner friends helped out with details, and Zach's stepmother did many of the flower arrangements for the reception and more.

But Setu and Zach agree that the moments that stand out the most in retrospect were the quiet ones.

"We met at McClain Lodge to do our photos the day of the wedding, and we were walking across this long bridge over the pond. It was very quiet, just the two of us and (the photographers)," Zach says. "We noticed our two best friends ... just sitting and talking and enjoying the venue.

"There was something about two people who were really close to us, who were instrumental in the whole thing, just hanging out and enjoying the venue. It just kind of slowed time down and reminded us, (after) so much hustle and bustle... it's all done. Everything is good. Now we can just sit back and take it all in, which is what they were doing."