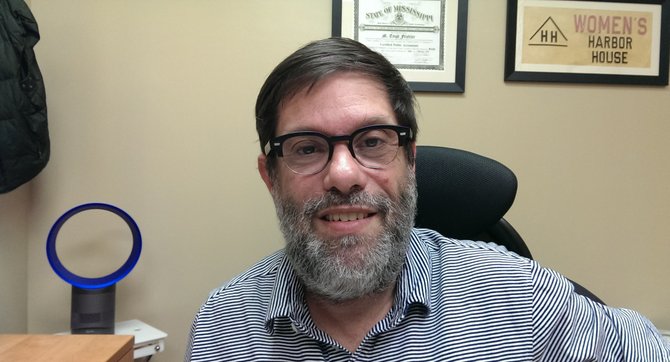 Sobriety and running a center to assist others to deal with addiction issues came back-to-back for M. Trost Friedler, whose substance abuse issues first brought him to Jackson in the mid-1990s.

"I got sober when I was 23 years old, and I had been sober for seven years. Unfortunately, I relapsed," Friedler said

During the time he was sober, Friedler, now 51, finished a bachelor's degree at the University of Southern Mississippi. He then worked as an accountant for more than a decade. His relapse eventually brought him to Harbor House, a Jackson chemical-dependency treatment and service provider, for treatment of his addiction.

In 1996, Friedler was sober once more, and the organization asked him to stay on—a request Friedler characterizes as a mix of desperation, on the part of Harbor House, and God's will.

"It was such a good fit for me because I come from three generations of salesmen," he said. "Running a nonprofit involves a lot of getting out there and selling."

A native of New Orleans, Friedler has held the executive directorship for Harbor House for 15 years. This week, he and Harbor House are celebrating the organization's 40th anniversary.

More than just his ability to sell and his business acumen gained in the accounting world, Friedler's path to sobriety gives him an important empathetic point of view toward the people he serves, allowing him to merge his professional training and his passion.

"I remember recovery," he said. "I've been in recovery half my life. It's my mission in life to make sure people can get the type of treatment they need. That includes homeless people sitting on the street who have very few places to turn. ... It's not a job for me; it's a way of life."

Harbor House offers services for men, women and families, and it has 107 beds for people recovering from alcohol and drug addictions. Each year, Harbor House serves around 700 people, and the facilities usually stay full. It's main campus is located at 5354 Interstate 55 S. on the Frontage Road. Harbor House also runs a men's transitional facility at 1019 W. Capitol St.

The treatment programs vary in length from 42 days to nine months, offered on a sliding scale that allows people who can't afford treatment—as well as those who can afford to pay—to get the help they need. Harbor House also offers a free, six-week family program that teaches families and friends to understand addiction and provide appropriate support to addicted individuals.

The organization works in conjunction with numerous organizations, including housing the Veterans Administration trauma and substance abuse units, an effort Friedler called "the most rewarding work I've ever done."

Addiction "doesn't discriminate," he said. "One out of 10 people have substance-abuse problems or mental-health issues." At Harbor House, Friedler has seen both rich and poor people, men and women, and even children with chemical dependency issues. The youngest addict was only 6 years old, and he's seen an 11-year-old who started shooting drugs with her dad.

"There's a lot of work to be done to make people understand that this is an illness," Friedler said. "It's a disease just like having cancer. And everyone should have the right to get help, regardless of their financial conditions."

One of the hardest things to do in life is to make a difference in the community, Friedler says. Harbor House's founders had the idea that providing substance-abuse treatment would have an impact on homelessness and crime at a time when no such treatment was available in Mississippi.

"It's a little bit overwhelming, what (the founders) gave and where it went," Friedler said. "These were guys that not only gave their time, but gave their money because they wanted this community to be a better place. ... Although we can't solve all the problems, we certainly can put a dent in the problems."

The Harbor House 40th anniversary celebration is tonight, Sept. 13, from 7-10 p.m. at the Mississippi Museum of Art (380 S. Lamar St.). Tickets are $40 for adults and $20 for children. The event includes live music, food and an art auction. For additional information about the event, call Billy Wynn at 601-371-7335, or visit the Harbor House website at hhjackson.org.