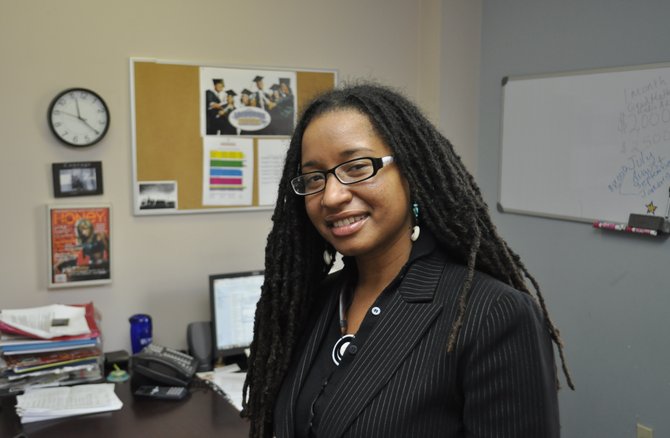 Shawna Davie, director of education initiatives for the United Way of Jackson, is spearheading a community-wide initiative to support Jackson Public Schools and its students. Photo by Trip Burns.

Shortly after Cedrick Gray wrapped up his Thursday evening press conference, in which he discussed fights at William B. Murrah High School last week, the assembled media hastily packed up their cameras and microphones and silently filed out of the auditorium at Siwell Middle School.

Gray, the superintendent of Jackson Public Schools, had decided to make a public comment just moments before the third town-hall style meeting for Alignment Jackson, an initiative to empower the capital city's school system.

It seemed to those who remained, as Ward 6 Councilman Tony Yarber pointed out, that the media who left appeared to be more interested in the problems JPS faces than how to address those issues.

Apathy is one problem JPS faces, but it's also a challenge that Alignment Jackson is designed to tackle. The aptly named program is designed to bring together business owners, non-profit organizations, community residents and city leadership in a joint effort to support Gray's effort to reform the district.

"A lot of it is moral, and a lot of it is building public will," United Way of Jackson's Shawna Davie said in an interview with the Jackson Free Press. "We're committing to the school district as a community, and trying to rebuild trust across those lines. We're providing spaces to develop relationships where they haven't ever existed."

This initiative for Jackson is based on a wildly successful program the city of Nashville implemented a decade ago that, once fully implemented, increased its high school graduation rate from 56 percent to 78 percent in a matter of seven years.

That initiative is based on an academies program, in which students have the option to focus their studies on five areas: aviation and transportation, digital design and communication, health science and law, business and finance, and hospitality.

The Nashville group recruited local businesses to sponsor these academies. The hospitality academy, for example, is sponsored by Gaylord Entertainment, which built a mock hotel room and commercial kitchen to teach students how to run a successful hotel or restaurant.

Similar academies for Jackson could be years away. For now, the focus is on bringing interested businesses and community members to the table.

"We're looking for the church that is willing to open its doors after service on Sunday to host a reading circle," Davie said. "Everyone can do something; we just need to let people know what they can do to help."

The Nashville Alignment program organizer started out by building consensus on goals and developing strategies to pursue them. Jackson may already be one step ahead, thanks to Gray. One of his first initiatives after taking over the school district last year was to set "wildly important goals," which he calls "WIGS."

Those goals for JPS for the 2013-2014 academic school year are laid out in a brochure JPS circulated at the beginning of the school year. They include improving proficiency in the following subjects: reading from 50 to 61 percent; math, from 48 to 59 percent; science from 40 to 51 percent; and U.S. history, from 51 to 61 percent.

Three committees are developing strategies Alignment Jackson can employ to help the district reach those goals—one each for elementary, middle and high schools. It's early, but the committees are mostly filled.

"I think people have wanted to do something to help for a long time," Yarber said.

"The problem is they haven't known how to plug in to the system. When you hit roadblocks like that, it creates apathy; it creates a spirit of sluggishness. I think what Alignment does is brings people to the table and tells them how to realize their worth in the process."

I'm encouraged by the conversations taking place yet mindful this is the same school administration which failed to apply for continuing funding for the Safe Schools Healthy Students program that had a PROVEN track record for making visible differences in the lives of children. On another note, the children in the school district do not have textbooks to take home . There is no earthly reason why this should be our reality yet it is. Each of these business entities could make an immediate difference in the lives of children by helping this district to buy textbooks. Ipads and such are not recommended by me at this time because many of our children live in unsafe environments where these items are sure to be stolen but who steals a textbook. We are looking for new solutions for the future but ignoring the very basic things our children need; things which can be provided in the present.