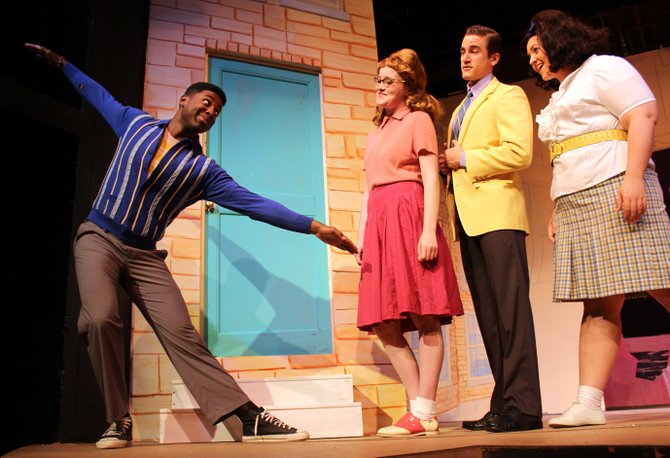 When it comes to "Hairspray," having the right actor in the right role is everything.

Of course, the same could be said of any musical, but with this one, the director must find not only the right vocal range and dancing ability to bring a character to life, but that person has to bring the right gender, age, race and body type to the role as well. After all, when Penny Pingleton's white-as-rice mother purrs, "this cat-like young black boy" while sidling up to Seaweed, the audience wants to see that description standing in front of them.

In that regard, director Francine Reynolds has excelled. As artistic director for New Stage Theatre, she plans each season and directs two or three shows each yeart. She took extra time to cast "Hairspray," beginning last December so she could get college students while they were home for Christmas break. As a result, the cast members better reflect the ages they are supposed to be playing, and the talent is amazing. It's also one of the largest casts New Stage has assembled for a show in a long time.

"I really do think the cast is the most important thing," Reynolds says. "The casting to me was really important and to bring in a group of young e nthusiastic people."

Set in 1962 Baltimore, the play follows vivacious curvy girl Tracy Turnblad as she joins the singing and dancing cast of her favorite show, "The Corny Collins Show," falls in love and navigates her way in a city roiling in race issues and struggling to integrate.

Hayley Anne Norris shines in the lead role. She captures the innocence, charm and optimism of a girl just trying to embrace integration, and she has the singing and dancing chops to boot.

Norris says playing Tracy is a dream come true. "For me, I grew up listening to 'Hairspray,' and it was the first role that I looked at and was like, 'I can play that!'" she says. "Tracy's the first role that anyone ever wrote for a bigger girl to play that's a leading role, and that's something amazing--that so many other girls are going to get to play this role, and they don't have to meet that criteria of skinny, blonde, 5-foot-2, pretty girl. They have to be a fun, bigger, outrageous personality girl. And it's fun. That exactly what draws you to Tracy."

Ray McFarland takes on another memorable role as Tracy's mother, Edna Turnblad. It's an iconic role and one that hits home for McFarland, who says his mother struggled with being a bigger woman in a world that caters to the slender and petite. The lesson, McFarland says, is to get comfortable in your own skin, and that's what the cast hopes the audience will walk away with.

As Amber von Tussle, Laura Landrum packs a powerhouse voice in her petite frame, but its her painted-on permasmile that really brings her spoiled-white-brat persona to life. And Jaclyn Bethany effortlessly captures the quirky awkwardness of Tracy's best friend, Penny Pingleton.

Once she's got the right people in the right roles, Reynolds says, the creative process becomes collaborative. She works to bring out the talents of the cast members, calling her directing style "a process of mutual discovery."

"I really think it boils down to the casting and the talent. That's how you make it your own. You have ideas and you have plans. You have set designs and costume designs. You have all those things you plan in advance and then you bring in the actors, and they bring in a whole different thing, and you use what they bring," she says. "I have some of the guys in the show, they are (dancing) in detention (in a scene). Three of these guys from JSU are really good dancers, and I recognized that and I was just like, 'You guys figure that out,' because they are going to be more natural rather than me telling them what steps to do."

Few musicals can challenge "Hairspray" in terms of pure fun, but it also serves as a powerful reminder that good people of both races not backing down is what finally made integration possible--and is the only thing that will continue tearing down civil-rights walls for all.