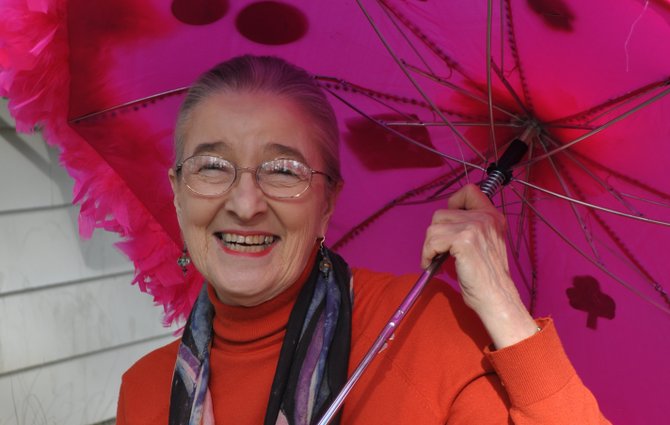 Each year, in March, V.A. Patterson becomes something else. One year, she became a gypsy. Another year, a cavewoman. One year, she even transformed into an emu.

Though her personas can get a little silly, even racy, that's all part of the fun of the Mal's St. Paddy's Parade.

"I tell people that I love being in the parade because it's the only day that I make a fool of myself on Capitol Street, and my mother would not be upset by that, and my daughter wouldn't be embarrassed," 74-year-old  Patterson says.

As one of the founding members of the Krewe of Kazoo, Patterson has been involved with the parade since the beginning.

"I watched the first one," she says. "And then the second one, we were all down around George Street having a good time, and Gay Reynolds drove up in her Moonbeam's Jungle (florist shop truck) and said, 'Come ride on the truck!' And from then, it was the only way, to be in the parade."

These days, the ladies of the Krewe of Kazoo march at the front of the parade, just behind Malcolm White's krewe, the O'Tuxes. The Kazoo women are known for their decorated, bright pink umbrellas they carry, themed costumes and green-and-pink color scheme.

Patterson says the krewe is inspired by the main theme of the parade, but puts a quirky word-play spin on it--such as 2000's theme, "A New Moo-llenium," where they dressed as cows. The group's theme and costumes remains a surprise until parade day. Patterson is excited to unveil the krewe's riff on the "Waters, Waters Everywhere" theme this year.

"Our krewe is such a creative bunch of people, and I just love sitting around with everybody, throwing ideas out," Patterson says. "I can't say I've ever had a favorite (theme) because each year seems to get better than the last."

Although not an artist herself, Patterson surrounds herself with creative people. A Jackson native, she graduated from Murrah High School its first year and then earned a degree at Millsaps College. She worked for many years in the museum field, specializing in historic house museums and was the first curator at the  Manship House.

"I've mostly worked in the arts," she says. "I'm an administrator. I'm a paper-pusher. I love creativity in people because I can pretend I'm part of that creative process." Patterson also served as the director of the Mississippi Craftsmen's Guild and worked for VSA before retiring last February.

Although she has a grown daughter and two grandchildren who live in Austin, Texas, Patterson can't imagine leaving Jackson.

"It's home, that's the first thing," she says. "It's been wonderful to be involved in the arts in Jackson and in the parade all these years--and it's a great group of women, the Krewe of Kazoo. ... It makes me stay young."