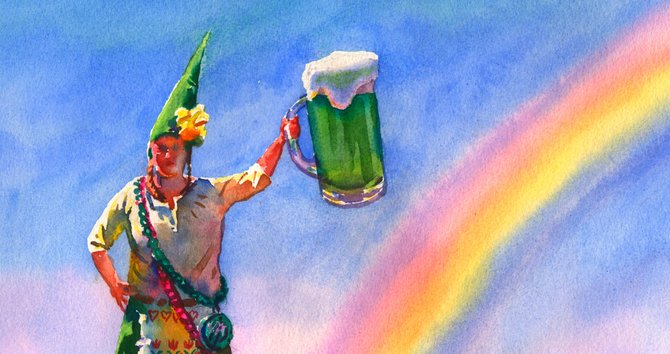 Waters painted this year’s official artwork, which he calls “Leprechauns on the Levee.” Photo by Courtesy Wyatt Waters

Anyone who lives or plays in Jackson long enough will eventually be driving down a road and pass a quiet, slender man with a paintbrush. Wyatt Waters, with his long, gray hair tied back and glasses perched on the bridge of his nose, is known for setting up in neighborhoods and downtown to create in his calm, peaceful way.

Jacksonians will get to see a new side of their favorite watercolorist this weekend, though--a green-haired, swashbuckling side. Each year, a local celebrity or well-known Jacksonian takes on the role of Grand Marshal of the Mal's St. Paddy's Parade. This year, Waters joins the ranks of those chosen to lead the biggest, greenest party in the state.

The theme, inspired by a Coleridge poem, is "Waters, Waters Everywhere."

"(The line in the poem) is actually 'water, water, everywhere,' but Malcolm has adjusted this to accommodate me," Waters says. "And so I will be dressed as a sailor, an 1800s sailor, which is not really the period that Coleridge was talking about, but again, it's poetic license or artistic license--I call it artistic learner's permit." Waters describes his costume's jacket as a mix between Jack Sparrow and Michael Jackson--rendered in shades of green, of course.

Even Waters' signature ponytail will take on the hue of the day. "My hair will be green," he says with a chuckle.

For Waters, taking on the role of Grand Marshal is a chance to stretch his limits and his naturally introverted personality.

"This is a very public event, there are 78,000 people supposed to be there," he says. "When you do books or something, and you have shows, you get to be public. But the part of me that's me ain't that way. ... You know, (my work is) solitary stuff. It's hard to take the solitary thing and be in public with it."

Waters says painting on location, plein air, was how he got used to being around people in the first place. "I don't think I could look people in the eyes until I was pretty well into adulthood," he says wryly. "But I had to, because when you're painting on the street, you meet homeless people, or you meet governors who are interested in your paintings. You meet them all--mostly everything in between."

Working on location allows Waters to see the city change from the street level. "There's a lot of good stuff happening, particularly in this area," he says of the stretch from downtown to Fondren. "... There's a lot of hope for what things can be. I know what things are, but you have to see what things can be. That's kind of the job of an artist, anyway--or of anybody. I don't know why they put that exclusively on artists; it's everybody's job."

Mal's St. Paddy's Parade is a good example of seeing what Jackson can be, Waters says.

"It's the hopeful part of what Jackson can be. And it's just a good cause, and it's a good excuse to get people together. I think (people coming in) will see Mississippi at its funnest. I know that's not the correct word (grammatically), but sometimes it's the right one."

Although Waters has always enjoyed watching the parade, he really got involved last year, when Malcolm White asked him to paint an image to be used on the posters and T-shirts for the 30th anniversary of the parade. White also invited Waters to march in the O'Tux krewe. "So I was led into this gently," he says.

This year, Waters created another custom watercolor for the event, featuring local Jennifer Breaux, dressed in her annual leprechaun garb, standing atop a barrel and hoisting a larger-than-life mug of frosty green beer. Waters named the painting "Leprechauns on the Levee."

Breaux came to Waters' studio in costume to pose for the painting. "I don't work from photographs. I mean, I can work from photographs, but there is something about being there that's very, very important in the time that we live," Waters says. "Because I love my little iPad and this little doohickey here (my iPhone), but the truth is, they are only valuable if they point you to the real experience."

That sense of in-personness is what Waters likes about the parade, too.

"I will say this about the parade: It gets people out of their cubbies," he says. "And momentarily, even though there is going to be a lot of iPhone photos, it will get them into the real experience of being there together. I like that."