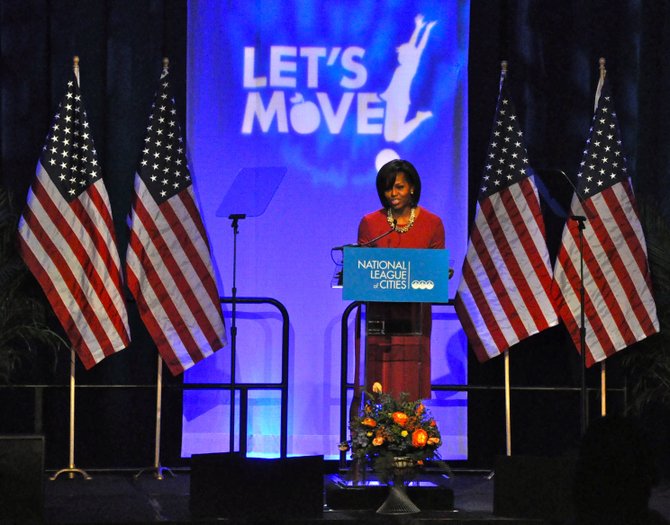 Politics aside, Jacksonians care about eating--and living--healthy now more than ever. The fact that JFP readers voted Adobo (which is focused on healthy cuisine) Best New Restaurant in the Best of Jackson 2013 awards, the buzz over the arrival of Whole Foods and the continued success of places such as the Rainbow Cooperative Grocery all prove that fact. But it's not just about the food, either: All over town, you can see folks of all ages running, biking, walking and taking control of their fitness.

It seems to be working. Although the Centers for Disease Control in Atlanta still ranks the state the most overweight in the nation, Mississippi's obesity rate for elementary-school children is down 13.3 percent since 2005.

To celebrate that fact, first lady Michelle Obama returned to the Jackson area to promote her Let's Move program, which focuses on childhood obesity prevention. It was Obama's first time back in the metro in three years. She and celebrity chef Rachael Ray visited Eastside Elementary School in Clinton to discuss the improvements in Mississippi school lunches and host a cook-off between lunchroom workers.

"What's happening here in Mississippi is really what 'Let's Move' is all about," Obama told the audience, which included media, community members and 400 local school children. "It's the story of what you all have achieved here that we want to tell. It's the story we want to be telling in every state all across this country."

Obama ran through some school-lunch successes, including the new standards the state Department of Education has set for vending machines; the increase in fruits, vegetables and whole grains; and the fact that many schools have replaced fryers with steamers--"Hallelujah," Obama said to that.

"So there's no reason why this success can't happen in cities and states all across the country--if we're willing to work for it," Obama said. "So now is the time for us to truly double down on these efforts. We know what works. We're seeing it right here. We know how to get results. Now we just need to keep stepping up."

Obama and Ray also joined 20 students from Clinton's Northside and Eastside elementary schools to judge the results of a cook-off between two local school chefs, each paired with a professional chef. The duos got 30 minutes to prepare a meal for 20 children that met federal nutrition guidelines.

One team created two types of fajitas and a fruit smoothie, while the other whipped up turkey sloppy Joes with quinoa patties, fruit salad and broccoli. The winner will be announced on "The Rachel Ray Show" March 11.