Battle of the Boxes 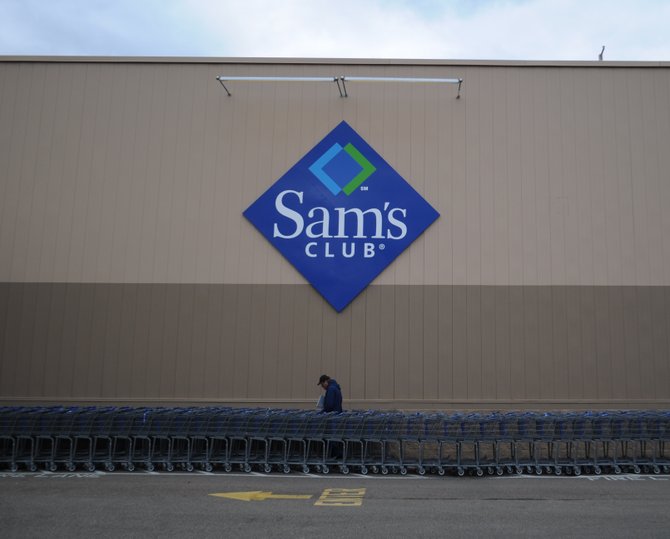 Sam’s Club has announced its intentions to move from Jackson, causing lots of speculation. Photo by Trip Burns.

Whole Foods, the nation’s largest natural and organic foods chain, is building a location at Highland Village in north Jackson.

If there's one thing Mississippians love, it's their discount stores. Jackson politicians went all aquiver back in January when the news hit of Sam's Club imminent departure from its north Jackson location to, presumably, cushier digs in Madison.

The rumors and political fur began flying almost immediately. The building had structural problems, WAPT reported. Ward 1 Jackson City Councilman Quentin Whitwell blamed the move on a lack of communication between Walmart and the city government.

"To me, it would only be right for a company of that magnitude to reach out to me as a council person, to the mayor or his office to see what accommodations we might could potentially make to keep them there or what their future needs are," Whitwell told The Clarion-Ledger.

Sam's, a Walmart spinoff that sells wholesale goods to its members, is taking $200,000 in annual Hinds County property taxes when it goes. Also moving from the same vicinity is a Haverty's Furniture store. Reportedly, the now-empty Circuit City building on East County Line Road has signed on a new national retail company, but those plans are still under wraps.

The city is using financial incentives, including bonds and tax exemptions, to try to lure more businesses into the city, but it's a long, hard process. The condition of the city's infrastructure doesn't make the job any easier.

"Companies locate where they can make money," said state Rep. Cecil Brown, D-Jackson. "They're in the business of making money, not developing the community. It's not on their radar; it's not what they're supposed to do."

Admitting he doesn't have any easy solutions, Brown did say that Jackson needs to fix some fundamental problems to become more attractive to businesses. "The problem with Jackson is that (it has) a public school system that's close to failing; (it has) streets that are nearly impassible. We have water and sewer problems that we're having a hard time dealing with. You can't have that in a successful city. You've got to deal with those things. ... You've got to fight. Even if you lose, you fight."

"The irony is that the city of Jackson and our citizens make up the largest core of consumers in the metro area," Johnson said. "And so, with these decisions being made to move to follow the customer base, I don't quite get it but that's what they're telling me."

Jacksonians have mixed feelings about the move. Many Jackson Free Press readers do not frequent the store because of ideological objections--some readers cited its hiring practices, while one just said he doesn't like the big-box concept.

Other shoppers believe what the politicians are saying: that it's the fault of the current administration for not doing more to keep Sam's in Jackson.

Still others are resigned that no one could have done anything anyway.

"What difference does it make how 'we' the people feel," wrote Angela McRae via Facebook. "It's moving, and there's nothing we can do about it."

The history of big-box stores' nomadic habits agrees with McRae's assessment. It's an oft-repeated story that has left cities across the nation littered with abandoned concrete shells and half-empty malls. Jacksonians may remember a time when Sam's was located off Robinson Road, making its move to Madison its third in the metro area.

"Walmart is constantly abandoning its existing stores to open stores in the same market area--sometimes the next municipality over, sometimes a mile down the road, sometimes across the street," said Stacy Mitchell, a senior researcher with the Washington, D.C.-based Institute for Local Self-Reliance. Retailers are on a merry-go-round to be in the latest, greatest new shopping area.

"It's generally because they want to build a newer, bigger outlet. Apparently, it is more advantageous for them, financially, to abandon an existing location and develop a green field than it is to expand at that location--or repair or update. Generally, their approach is just to move on. ... It comes at an enormous cost to the community, because now you've got these vacant structures that are very hard to redevelop."

The people who will be most hurt by the store's moving away from the city are those that depend on its low prices for their every-day shopping, or for buyers who take advantage of bulk pricing.

"We get bulk toilet tissue, paper towels, to-go plates because we feed a lot of people on the weekends," said Duane Carter, adding additional items to his list, including kitchen supplies, bulk meat, soap and shampoo. "With gas prices going up, you knock out a weekend of bulk shopping (and it) keeps you from making extra trips three weekends out of the month going back and forth for household necessities."

The real question for cash-strapped cities like Jackson is whether big-box stores are worth the money, time and effort to get them to set up or stay. With few exceptions, big-box retailers may actually do more harm to a struggling economy than good. Yes, the stores provide some jobs, but they don't pay well (on average, about 12 percent to more than 14 percent less than other retail jobs), and most don't offer benefits such as health insurance or retirement savings plans. 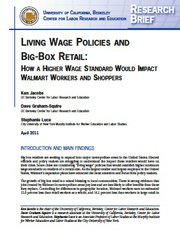 Evidence from numerous studies suggests that the chain-store wages depress pay in surrounding communities, and their low, low prices and aggressive market-share grabs put local competitors--those who don't have the benefit of a chain's volume buying--out of business.

"Walmart workers make greater use of public health and welfare programs compared to retail workers as a whole, transferring costs to taxpayers," report the authors of "Living Wage Policies and Big-Box Retail," a 2011 report from the University of California, Berkeley's Center for Labor Research and Education.

The "Walmart economy" has contributed greatly to the demise of the middle-class, Mitchell said, pushing more and more people to becoming the working poor. "We're all indirectly paying for that," she said.

Multi-national chains also contribute considerably less to the local economy than locally owned businesses. In 2008, New Orleans decided to find out what that really means to a city still struggling to recover from the devastation of Hurricane Katrina's destruction three years earlier. New Orleans' Urban Conservancy, in partnership with Austin, Texas-based Civic Economics, delivered its findings in 2009. "Thinking Outside the Box" reported striking evidence that local business had a far greater economic impact on the city than chain stores.

Thinking Outside the Box 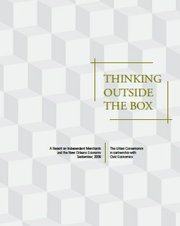 "This study shows that local retailers, when compared to leading chain competitors, generate twice the annual sales, recirculate revenue within the local economy at twice the rate and, on a per-square-foot basis, have four times the economic impact," the authors concluded. "Investing in locally owned businesses is a cost-effective way to grow the New Orleans economy."

Jacksonians and surrounding suburbanites are excited about the retail giant coming to the city. Shoppers applaud Whole Foods for putting healthier, natural and organic foods on everyone's menu. Without a doubt, it's a worthy endeavor, especially in a place like Mississippi, with the highest obesity rates in the nation--and where some believe macaroni and cheese qualifies as a vegetable.

"I feel it will spur more competition and variety in the marketplace," Knol Aust said.

Brandi Crowell Denson isn't sure that the competition is worth it. "I'm worried about the impact it may have on Rainbow and on the local food movement's effort to get more people to shop at the farmer's markets," she said via Facebook.

Whole Foods comes with a trendy, upscale cachet similar to The Fresh Market in Ridgeland's Renaissance shopping center. When professional people look at communities to put down stakes, they look for stores such as Whole Foods and Fresh Market that provide a large variety of healthy choices. Good shopping, especially for necessities such as food, may also enter into residents' decisions to stay in an area.

Rep. Brown said he sees the stores coming to Jacking as a net win for the city. "They're going to be in an area with higher disposable income," Brown said. "... They think they can make money."

Shoppers should expect to pay more for groceries at Whole Foods than at many supermarkets; organic vegetables and free-range meats are more expensive to produce. The store's nickname "Whole Paycheck" came up several times.

"I love when people say that," said Darrah Horgan, a Whole Foods public relations specialist. She said it gives her an opportunity to explain that comparison shoppers will find their prices competitive "when you're comparing organic apples to organic apples--you have to do just that." People should look at quality, ingredients and how foods were raised to really compare pricing, she said.

Whole Foods has a program supporting local growers and purveyors of other local foodstuffs. Just last month, the store held a vendor open house at the Mississippi Agriculture and Forestry Museum. Horgan said about 50 to 60 vendors attended, running the gamut from local farmers to soap makers. Whole Foods likes to put on these events especially before it opens a new store, but Horgan said it will hold them periodically going forward. During the events, buyers explain what the store's standards are.

"If you have a good solid product and it meets our quality standards, our buyers try it," Horgan said. "It's not a very difficult process."

Mitchell isn't so sure Whole Foods offers local options because of demand.

With its huge demand for foods to stock its more than 340 stores, it also pushes its national house brands, though its commitment to offering local foods is far better than other national chains, such as Kroger or Walmart.

"There really isn't a sweet spot" for a percentage of local over house-brand foods, Horgan said, adding that the types of products and seasonal availability are only two of the factors involved in stocking regional varieties. "Local is something people want. It offers us more choice in the market. ... It's more about choice for customers. ... Our customers tell us what they want."

The chain also has been known to buy up or push local markets out of business--especially those that focus on natural and organic foods, such as Rainbow Whole Foods Cooperative Grocery in Fondren. It happened in Mitchell's hometown of Portland, Maine. That's not good in a city like Jackson where many neighborhoods have already lost ready access to full-service grocery stores. The problem becomes more acute when low-income shoppers can't afford what a trendy, upscale store has to offer.

"Go with your strengths," Mitchell said.

"We really need to focus on growing smaller businesses. That's got to be part of the long-term solutions."

The following comes from the Institute for Local Self-Reliance, a national nonprofit organization working to strengthen independent businesses and local economies, and is reprinted here with permission.