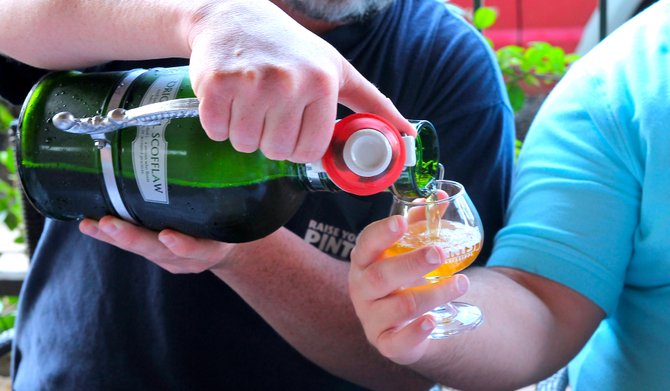 Top of the Hops Beer Fest is meant to appeal to beer aficionados as well as newcomers to the craft-beer scene. Photo by Melanie Boyd.

This year's Mississippi Craft Beer Week, the fourth annual, continues to grow in scope and number of events. The week, organized by Raise Your Pints and its sponsors, kicked off Sunday, July 21, but plenty of events remain in the second half of the week. For more events across the state, including Ocean Springs, Gulfport, Meridian, Starkville and Tupelo, visit raiseyourpints.com.

Jackson - Top of the Hops Beerfest

It's a good week—and summer—to love beer in Jackson. After last year's passage of the higher-gravity beer law, and this year seeing the homebrewing ban lifted once and for all, beer lovers are seeing a big surge in new brews coming to Mississippi.

The 4th Annual Top of the Hops - Jackson Beer Festival will offer more than 150 beers from across the globe, including:

Closing out Mississippi Craft Beer Week is the fourth annual Abita Top of the Hops Beer Fest, with more than 150 beers just waiting for hopheads under the roof of the Jackson Convention Complex.

Jay Wilson, who does marketing and events for Red Mountain and Blue Goose Entertainment—the event producers behind the festival—says Top of the Hops is special because of the care that goes into choosing the beers.

Each attendee will receive a two-ounce mini mug to sample the more than 150 beers available. A Samuel Adams Brew University area will be set up to host seminars on Cooking with Beer, Brewing 101 and Pairing Beer with Food, among others.

One new element for the festival is the Tin Roof Cornhole Tournament, sponsored by a Baton Rouge Brewery. Sixteen teams of two will compete for the chance to win a custom cornhole set from the Tin Roof Brewing Co. "We've done cornhole at some of our other beerfests and it kind of becomes a mini festival within the festival," Wilson says. "We set up like the March Madness basketball tournament."

Throughout it all, expect live music from Grateful Dead cover band Otis Lotus and other entertainment throughout the convention complex.

Wilson says the festival appeals to a wide range of people and taste buds. "We've done almost 25 beer fests all over the country, and what we've seen is that there is a good cross-section," he says. "There are the beer aficionados that get there early, get the festival guide, they go through the descriptions, they zero in on several breweries that they've read about in Draft Magazine or whatever, and they will go straight to those booths and try samples, talk about it, take notes. Then there is the person who likes craft beer but isn't maybe hardcore about it and grabs their buddies, who are just kind of getting into craft beer and come along for the experience. And then there are those that think Bud Light and Miller Lite are their beers of choice, and somebody had an extra ticket so all the sudden they are introduced to craft beers."

Jackson isn't the only city to host a Top of the Hops festival. Wilson says that, although each festival is structured essentially the same, each city has its own personality.

"Since Mississippi just passed the high-gravity law last year, the state of Mississippi is just now being exposed to a lot of great craft beers," he says. "In the lifespan of craft beer, Mississippi is kind of in its infancy. There's a lot to look forward to in Mississippi in the discovery phase of exploring new beers."

Top of the Hops is July 27 at the Jackson Convention Complex (105 E. Pascagoula St., 601-960-2321) from 4 to 8 p.m. General admission tickets are $35 in advance. VIP tickets are $75 in advance and give ticketholders entrance to the festival an hour early, and access to a VIP area, special beers and free food. Designated driver tickets are also available, $15 in advance for general admission and $25 in advance for VIP. Purchase tickets at the Coliseum Box Office, BrewHaHa Homebrew Supply Co., ticketmaster.com or topofthehopsbeerfest.com/jackson.