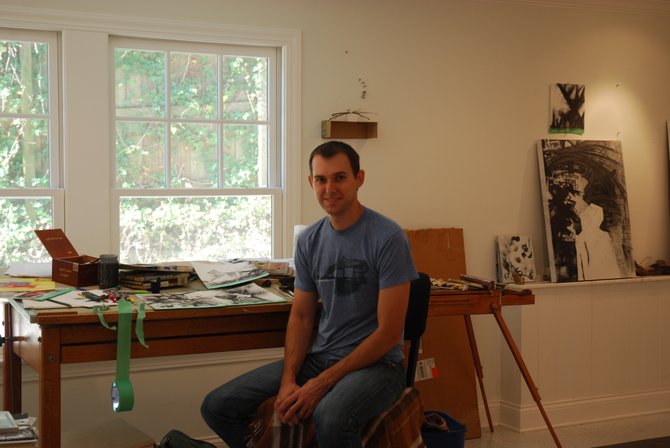 Jackson artist David West is a teacher as well as an artist. He teaches art classes at Belhaven University, a position he has held for four years. He teaches beginning through advanced drawing as well as printmaking and other classes.

West encourages artists to use all the resources available to them to improve and build their art careers.

"Local artists should look up organizations like the Mississippi Arts Commission—take advantage of what opportunities they do have and go from there," he said.

This spring, West participated in an installment of the Four Seasons of the Cedars Visual and Performing Arts Series, an art show presented by the Fondren Renaissance Foundation and the Gertrude C. Ford Foundation at the Cedars (4145 Old Canton Road, 601-366-5552). West participated alongside painter Jerrod Partridge, glass artists Elizabeth Robinson and Kay Holloway, and ceramic artists Ky Johnston and Courtney Peters.

"The pieces I displayed at Four Seasons grew out of my work teaching drawing at Belhaven University," West said. "I teach students how to use different media and how to be experimental and expressive. The pieces also grew out of my everyday experiences."

West, 36, generally works in non-objective, abstract subject matter. The majority of his work on exhibit in Four Seasons consisted of 8.5-inch square graphite drawings, with some larger 22-by-30-inch drawings. The exhibit also included some of West's early wood-block prints.

"Drawing has been part of my life for as long as I can remember, and I've been doing woodcut print work for 15 years," he said. "As a medium, woodcuts are tactile like sculpture, colorful like paintings and also have a drawing aspect to them. There is also something rewarding about doing something old-fashioned and doing it the hard way."

The artist is originally from Brookhaven and attended Brookhaven High School. He and his wife, Jennifer, both moved to Baton Rouge, La., in 2005 to attend Louisiana State University. West graduated with a master's degree in fine arts and his wife received a doctorate in rhetoric and composition. The two moved to Jackson in 2009. West and his wife have two daughters: Josie, 6, and Olive, age 2.

West is a big believer in cultivating and encouraging local artists.

"I believe in keeping and nurturing the artistic talent we have here," he said. "I want the upcoming students at Belhaven to stick around, and I want to be an advocate for young artists in the area."