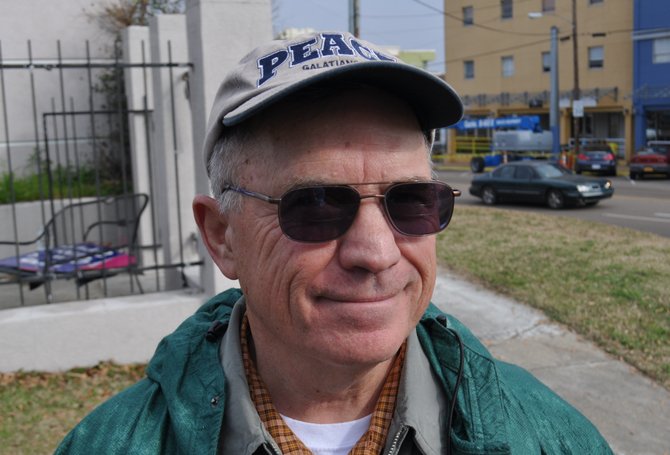 Anti-abortion protester Doug Lane says his brother, David Lane, was hospitalized due to being pepper-sprayed this morning. Photo by Trip Burns.

A Jackson Women's Health Organization security guard sprayed two anti-abortion protesters in the face with pepper spray this morning. Jackson police have not taken the guard into custody.

Other than those sparse details, accounts conflict about exactly what happened during an incident that necessitated ambulances and police response.

Protester Doug Hiser said the guard, whom Hiser knows only by his first name, Roy, was in a bad mood before the incident. "He said, 'I got mace this morning, and I'm gonna spray everybody,'" Hiser said Roy told him.

Anti-abortion protests at the clinic have intensified this week, as the national organization Operation Rescue has joined local protesters on the 40th anniversary of Roe v. Wade, the landmark 1973 U.S. Supreme Court decision making abortion legal throughout the nation. The JWHO is the only remaining abortion provider in Mississippi, a status that is threatened by passage of a state law requiring the clinic's doctors to have admitting privileges in a local hospital. The clinic is unable to comply with that law, which supporters say is unnecessary and unconstitutional.

Hiser claims the guard's spraying the protesters was unprovoked. He said the disagreement began when one protester attempted to stop the water from a lawn sprinkler with his foot, which Hiser said was watering nothing more than the sidewalk in front of clinic's entrance on Fondren Place. Protesters are prohibited from blocking the clinic's entrances.

Roy, the guard, sprayed Doug Lane and Cal Zastrow, whom Hiser identified as pastors. Lane's brother, David Lane, declined to say what church or organization his brother was connected with. Another protestor, Harriet Ashley, who said she has protested at the clinic since 1997, got some of the spray on her glasses. Lane and Zastrow were taken to the hospital by ambulance.

Diane Derzis, JWHO's owner, said much of the heightened tension at the clinic comes from city and state officials' actions. The city gave the protesters permits to hold church services in front of the clinic for 40 days starting Jan. 19, she said. "Then you've got the governor, who's at every function giving them his blessing," she said. "It's no wonder that the (tension) level is where it is. … That's why I have a security guard. He felt threatened, and he (sprayed) them."

Derzis said she was sprinkling the grass between the clinic fence and the sidewalk because it's not doing well. She claims the protesters were destroying the sprinkler. "I think that's what started it," she said.

JPD officers at the scene declined to comment. A call to the Jackson Police Department has not been returned.

Let's be clear there is nothing in FACE law that says if a sprinkler is running protesters are now able to block access to the entrance. In fact I would argue that is NOT the standard. They also try to block the gate if it's close which makes NO sense because someone is standing there to open it for patients on the days i work. So that doesn't negate the law as stated in the FACE law. The antis should stop violating the law.