The 2013 Mississippi legislative session kicked off its barrage of bills with a measure that should be familiar to every woman concerned about her reproductive rights.

Reps. Andy Gipson, R-Braxton, and Mark Formby, R-Picayune, have filed a bill "to prohibit an abortion of an unborn human individual with a detectable fetal heartbeat except when a medical emergency 3 necessitates." 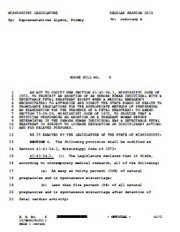 The bill is virtually identical to a bill introduced in last year's session, according to women's rights advocates.

Gipson has also introduced an NRA-backed bill to clarify that "concealed" weapons can be totally or partially concealed in Mississippi.

Last spring, the ultra-conservative Gipson, who is also a Baptist minister, came to national attention when he called on his Facebook page for gay men to be put to death, a penalty he backed with an old-testament biblical passage from Leviticus. He then called homosexuality "unnatural behavior that results in disease."

The lawmaker was unapologetic. "To be clear, I want the world to know that I do not, cannot, and will not apologize for the inspired truth of God's Word. It is one thing that will never 'change,'" Gipson reportedly wrote on his Facebook page in response to the criticism.

At the end of each college football season, I am saddened because I know that all that is left until baseball resumes is basketball...and the opening salvos of the idiots within our state legislature. Here's a fervent prayer to members of our legislature reading this - please do not agree to anything at all that Mr. Gipson and his ilk promulgate.

If there's one thing Jesus taught, it's that we should issue public calls for other people to be put to death.

But seriously, why do jackasses like Gipson always have to be Baptists? You're making me want to be a Catholic, just so I don't have to share a denomination with you.